We can laugh and cry with the ups and downs of Riley in "Inside Out," but is that really how emotions work? 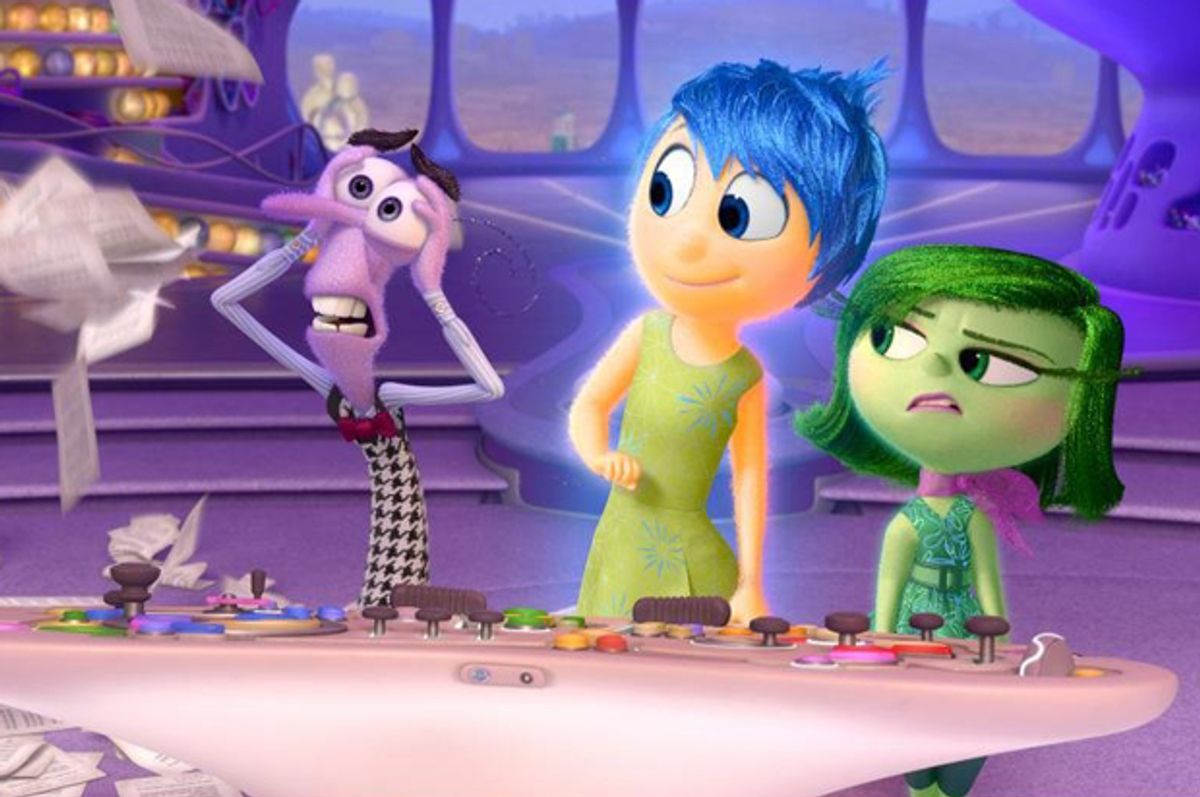 Emotions like fear, anger and joy are embodied in command centers that control behavior.  Or at least that’s a central underlying message in Pixar’s highly entertaining and sometimes brilliant film “Inside Out,” about the inner workings of the brain of Riley, a hockey-loving young girl.  But is this really the way emotions work? It is if you are a follower of Charles Darwin’s theory of emotions as mental states (feelings) programmed into the brain by evolution. These feelings, when aroused, give rise to behaviors that reflect the feeling—we smile and frown because we feel joy and sadness.

One of Darwin’s most prominent admirers in the late 19th century was the Harvard psychologist William James, who famously noted that we don’t run from a bear because we are afraid; instead we are afraid because we run. His idea was that each emotion has a signature body state that is sensed by the brain in the process of creating feelings. In spite of over a century of research on this idea, there is still no compelling evidence that body feedback, on its own, determines feelings. Unfortunately, the failure of James’ feedback theory of why we feel fear has overshadowed his more profound point—that the feeling of fear in the presence of a threat is not the cause of behaviors also elicited by the threat.

It is natural to think that the feeling of fear causes us to respond in protective ways (freeze, flee, fight) because when we are in danger we simultaneously feel afraid and respond.  But this observed correlation belies the deeper reality in the brain-- that the mechanisms that give rise to feelings of fear are not the same as those that control the behavioral and other bodily responses to threats.  As James said, the feeling of fear is not the explanation for why your heart races and you sweat while freezing or fleeing in response to a threat.  For example, it has long been known that threatening stimuli presented to people subliminally, resulting in no conscious awareness of the stimulus, and no feeling of fear, can elicit body responses typically associated with fight-flight behaviors.

Work that I and others have done on rodents over the past three decades has illuminated how the brain detects and responds to threats.  In brief, when a threat is present, information about it is transmitted through the brain to the amygdala, a relatively ancient subcortical region that then initiates bodily reactions to cope with the situation.  And research on humans has shown that the amygdala is activated by threats, even when the stimuli are presented subliminally. Human research has also shown that conscious experiences, whether emotionally charged or not, depend on other regions of the brain, notably more newly evolved neocortical regions such as the prefrontal cortex.

The problem is that scientists who adhere to Darwin’s view have applied labels like “fear” to both systems (I have myself done this in the past). Thus, the amygdala is often talked about as the seat of “fear,” when in fact what it contributes in dangerous situations is not “fear” but instead the detection and response to threats -- people with damage to the amygdala can still feel “fear.” Fear is not programmed into the amygdala and waiting to be unleashed by a threat.  It is what happens when we becomes consciously aware of a threat. The amygdala-controlled responses contribute to the feeling of fear but the amygdala is not a control center for these.

So where do emotional feelings come from and what do they do?  A growing number of scientists agree that feelings are not hard-wired innate states stored in ancient brain circuits that also control behavioral responses.  Instead, feelings are experiences in consciousness that are assembled using attention, perception, memory and other cognitive processes. And once they are present they can indeed guide our thoughts, and even control our actions.  But feelings don’t control what is typically called “emotional” reactions—for example, freeze-fight-flight responses, or, in “Inside Out,” Riley’s smiles and frowns. “Inside Out” was correct to emphasize that feelings can influence complex behaviors based on thoughts and memories, but wrong in implying that feelings are the cause of the more primitive reactions.

The recognition that feelings and body responses are separately controlled by the brain has far-reaching implications for how we understand and treat emotional disorders, such as those involving dysregulated fear and anxiety.  Systems that control conscious feelings and behavioral reactions are likely vulnerable to different genetic and environmental factors, and may need to be treated separately. Anti-anxiety drugs are typically developed by testing their ability to change behavioral responses to threats in animals—animals are more exploratory (less inhibited) in challenging situations.  This is perhaps why anxious people, when taking drugs, may be more capable of going to work and carrying out daily chores (they are less inhibited by challenges), but don’t necessarily feel less anxious. This outcome has led some pharmaceutical companies to pull out of the anti-anxiety business. But the drugs are doing exactly what they were developed to do—reduce behavioral inhibition.  That’s a start but feelings too must be a treatment target.  And that’s where psychotherapy may be most useful, but only if therapies are developed that recognize that behavior and feelings have to be addressed separately and differently.

Darwin’s theory of evolution by natural selection is one of the greatest intellectual achievements of all time.  But that doesn’t mean everything he said was correct.  And one thing I believe he got wrong was the nature of emotions. “Inside Out” does a wonderful job of telling a story about the psychology of emotions based on the Darwinian tradition. So long as we realize that this a work of art based on one view of emotion, rather than a survey of the science of emotion, we can laugh and cry with the ups and downs of Riley’s life as her joy center tries to keep fear, sadness, anger and disgust centers in check.

Joseph LeDoux is the author of the recently published book "ANXIOUS: Using the Brain to Understand and Treat Fear and Anxiety" (Viking). Follow him on Twitter @theamygdalolid.

Charles Darwin Emotions Fear Inside Out The Brain