Next time you're tempted to stop at a pet store, remember all the ways animals can suffer on their way there 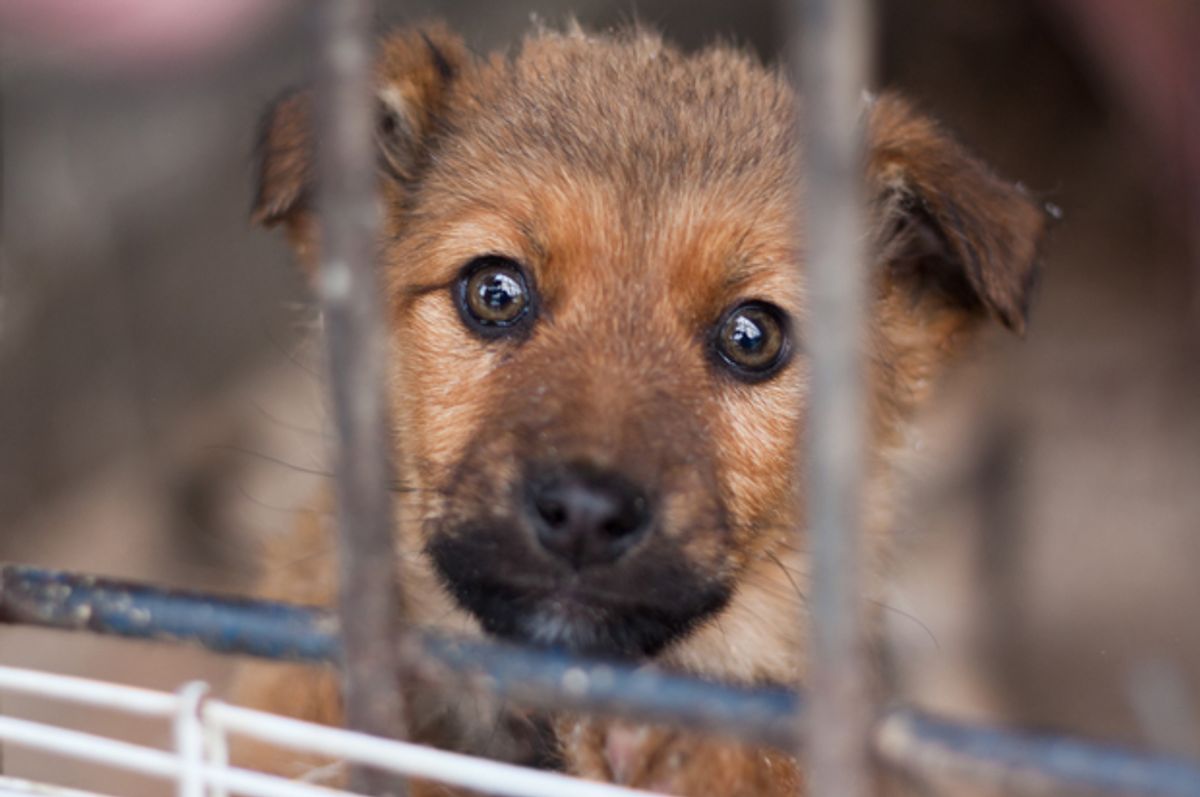 When you walk by a pet store and see an adorable puppy or kitten waiting for a home, it can be tempting to go inside, we know. But many pet stores get their pups and other animals from mills where they're often abused and treated like baby producing machines rather than as loving creatures. If a pet store is selling dogs rather than hosting adoptable ones from shelters, you can bet they're getting them from puppy mills.

Next time you find yourself walking by a pet store and consider stopping, remember all the ways dogs can suffer before and after they get to the store.

They're For Sale, Not Up For Adoption

Responsible pet store owners sell products, not pets. Many larger brands like PetSmart team up with local adoption centers to showcase adoptable dogs and cats. Smaller pet stores are starting to jump on board, too, selling pet products and hosting adoptable shelter animals, instead of selling animals from mills or other dubious sources. If you see a high price tag on a pet, be wary.

They're All Puppies Because They Come From A Mill

Are all the animals in the store kittens and puppies, with nary an adult dog in sight? If so, it's likely this pet store isn't partnering up with a shelter to find homes, but is instead collecting animals from a mill. Research indicates that 90 percent of puppies found in pet stores come from a puppy mill rather than from a shelter.

The tagline "USDA licensed breeder" sounds pretty official, doesn't it? The truth is, it doesn't hold much weight. U.S. federal law under the Animal Welfare Actallows breeders to keep animals in cages with wire flooring that are stacked on top of each other. It also lets them breed females continuously with little to no break between litters. So, a "USDA licensed breeder" in the window doesn't indicate much about where the animals actually come from or how they're being treated.

They Don't Keep The Animals Clean

Do the animals have coats that look matted, wet or as if they haven't been given a bath in a long time? If the owner isn't worried about keeping a puppy's coat clean or ridding it of fleas, it's doubtful he's paying much attention to the conditions from which they came. Puppies should never be left to roll around in their own waste and in some pet stores you might see feces sitting in a pile right next to the animal.

There's A Good Chance That Pup Is Sick

Does the puppy or kitten in the window show symptoms like sniffling or sneezing? That could be kennel cough and it's a sign she shouldn't be out in the store with the other pets or interacting with humans. Kennel cough is a condition that could turn serious and the poor girl should be receiving medical treatment and proper care, not be on display for purchase. Other diseases prominent among pet store puppies who come from mills include heart and kidney disease, epilepsy, parvovirus and mange. Pet store owners have been known to use antibiotics to mask the signs of these conditions in order to sell puppies.

The Cages Are Too Small

Are the store's kennels roomy enough for the pet to roam around, without having to sleep in his own fluids? The lingering aromas of animal excrement, urine or too much disinfectant are all signs of poor upkeep and unsanitary conditions.

Pet stores often keep animals in tiny tanks or cages too small for one animal to fit inside comfortably, yet you'll often see two or three animals stuffed inside together, much like in puppy and kitten mills. This is a sign the store is about profit, not about finding its animals good homes and humane living arrangements.

They Come From Horrible Conditions

Like most businesses looking to make a profit, puppy mills treat their charges like products. That means they look to cut expenses when it comes to selling them. Adult dogs are kept in overcrowded cages, usually lined in rows with no thought to how this affects their health or psychological state. As mentioned above, the cages are typically wired to allow feces and urine to fall through (except for the parts that get stuck on the wiring). The mothers are bred constantly until they're deemed too frail to have children, at which time they're killed.

The Ride To The Store Is Stressful And Terrifying

Puppy mills employ brokers and traders to transport the pups to pet stores. They're often stuffed in crates and piled up in the back of 18-wheelers to be driven across country. It's hard to believe that the truck driver is making pit stops to let the pups out and make sure their crates are clean during the trip.

They Don't Get To Experience Joy

Puppies and adults bred in mills aren't given toys to play with and most of them never know the joy of chasing their own tail. They're not given room to run freely, nor are they cleaned. Life in a puppy mill is traumatic, painful and a terrifying existence for puppies and especially their parents, who will never know what it's like to live in a loving home.

If you're considering bringing a pet into your home, remember that purchasing from a pet store only helps to further the profits and continued business of mills. Instead, rescue a wonderful animal like these little guys from a shelter and you'll have a special friend for life who'll be eternally grateful to you for providing a good home.

Check out Adopt-a-Pet.com to find available shelter dogs in your area.