Yes, it's possible to be queer and Muslim

People think Islam and queerness are contradictory, but both are deeply woven into the fabric of who I am 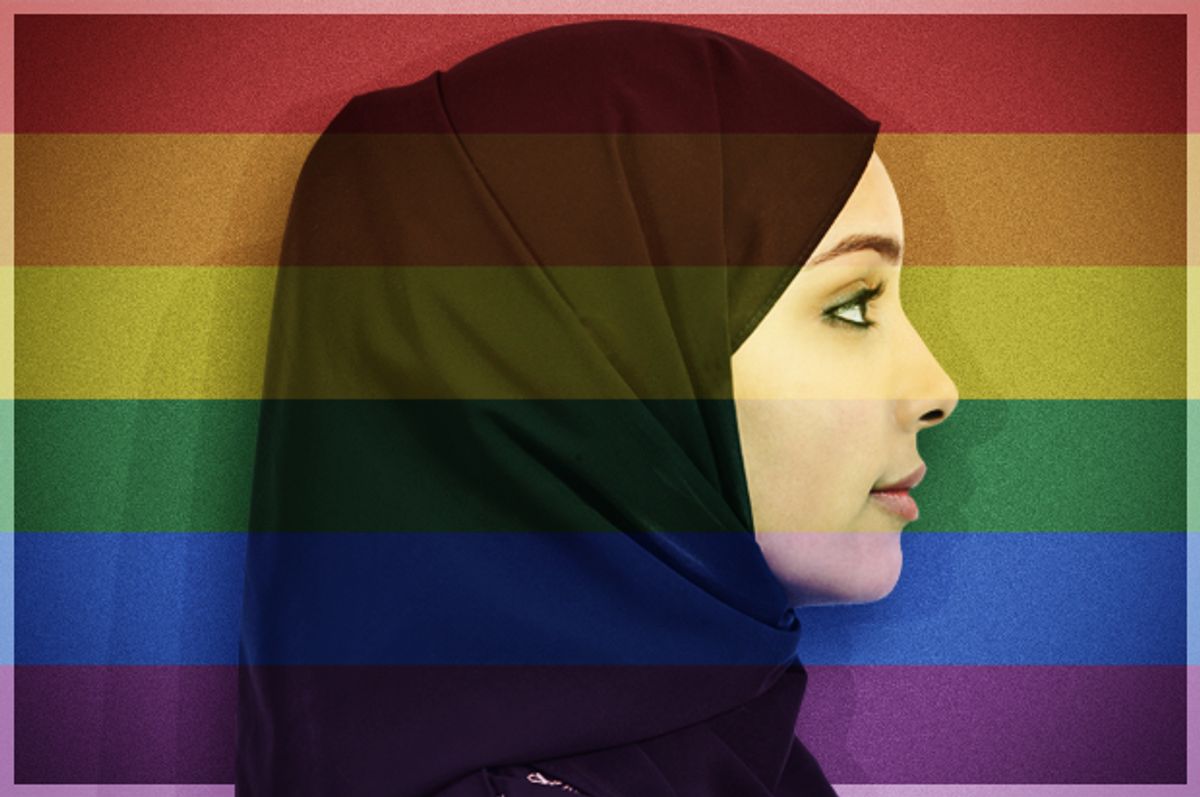 I'm excited about this date, I really am.

It's been a while since my last heartbreak, and my best friend has personally taken on the task of deciding for me that it's time to move on. She has yelled at me to download Tinder, cheered me on as I cobble together a profile. Encouraged me to swipe right a few times, talk to women I match with. It’s taken a while, but I'm starting to get into it. And now I'm excited about this date.

She's risen to the top of my tinder crushes, this date. The banter – an essential component of all my crushing – has been electric, and she's smart and funny and gorgeous to boot.

We're meeting for ice cream, and she's a little late, my date. I scan the passing faces for resemblances to the photos she has up on Tinder, wanting to spot her before she does me. "Look for the hijab," I've told her, a little anxious to reveal what's under the hats and the helmets in my own pictures. "I'm hard to miss." Her nonchalant response – neither fetishizing nor surprised – puts me at ease. I'm excited about this date.

Except we spot each other at the same time, exchange shy glances and quick hellos before ordering, sit down with our ice creams, and her second question to me is: "So. Tell me, Lamya. How are you queer and Muslim at the same time?"

This happens often enough that I have a strategy. For basic white girls with no subtlety, for women at lesbian bars making small talk, for those who have taken no time to get to know me and are obviously not invested in my answers. For quick dismissals, for moving on.

The script goes something like this. First, an indulgence: a small, private eye roll. Then, the stock answer. That queerness and Muslimness are not mutually exclusive, that Islam is not a monolith, that my Islam is expansive and my God, capacious. That queer too, is not a monolith, there are different ways to be queer, different narratives that do not fit neatly into Western models of coming out and nesting in nuclear families that replicate straightness. That people need to stop fetishizing those of us who live at these seemingly impossible intersections, that my queerness and Muslimness do not need to be reconciled because they're so deeply enmeshed, so deeply party of who I am.

By the time I'm done educating, I’m exhausted and my interest has fizzled out. The ensuing attempts at banter feel hollow, and, after an appropriate amount of time has passed, I use work as an excuse and bow out.

It is late when he calls me one night, my friend. Out of the blue, and a little past the hour of polite phone-calling. Rings once and hangs up. I have fielded these calls from him enough times over the course of our friendship to know to pick up immediately when he calls again, before he can change his mind. His breath catches at hello, and this is my cue to take over the conversation. I curl into the couch with my phone, settle into the half-dark of my living room, ramble on about the inconsequential and the everyday until he's ready to talk.

It comes out slowly. That his father is sick. That he has just gotten off the phone with his mother, there have been snide comments about his ex-boyfriend and heavy levels of guilting. Are you praying, his mother has asked. Are you reading Quran, if you had you would know the difference between right and wrong. He is angry and tired, but mostly just tired. Of the purported causality between his gayness and his family's woes, of silences and not being able to answer back, of letting things slide in the name of compassion. Do his parents even know that he’s hurting, that they're hurting him, that they're driving him away from the solace he has found in religion. His words turn into tears, and I find myself crying with him, for the familiar.

Except as the tears peter out into silence that sits comfortably between us, a quiet question: "How do you do it, Lamya? How are you queer and Muslim at the same time?"

Him I cannot lie to, my friend. Who has been there for me through difficult times, whom I have been there for through difficult times, who knows what it is to struggle with queerness, with Muslimness. Him I refuse to dismiss with easy stock answers, cannot dismiss with easy stock answers because here's the thing: I don't actually have them for myself.

That my queerness and my Muslimness are too deeply woven for me to choose between them, to see them as mutually exclusive. I don't need an Imam to tell me this, to tell me that I can find comfort and joy in both. Don't need explanations for the Quranic verses and Hadith that are frequently cited as saying otherwise. Not to say that I haven't pored over all the explanations and hermeneutics and attempts at queering the Quran that I have come across, I have, and some are convincing and some are decidedly not, some feel like stretches, like playing with words. But what this process has taught me is that a text is a text is a text. Texts come with contexts and interpretations and it’s possible to take what speaks to me and let go of the rest. To rely, instead, on my faith, on my practice. My trust in justice, in mercy.

And likewise, to extend that mercy to others, my Muslim communities in particular. I don’t need to renounce my communities, can’t blame them entirely for their casual homophobia in a world that is homophobic. When homonationalist, mainstream LGBT politics have been wielded to further marginalize my communities, paint them as “backward” and justify occupation. I don't need to defend why I keep going back to my mosque, don't need to name the spiritual highs and sense of connectedness I derive from this imperfect space, this imperfect community. This imperfect community that struggles with homophobia, but also with anti-blackness and misogyny, that is simultaneously battling surveillance and racial profiling, wars in the name of saving us from ourselves, motherlands being pounded by drones. This imperfect community that I’m invested in fighting both with and against.

Instead, what I need, what I find I cannot live without is community. Queer Muslim community, specifically: chosen families comprising people who eat together and protest together, whom I can be queer around and Muslim around without having to defend, explain, justify. Iftars every day in Ramadan and reading Quran together and beach trips galore. People who will pick me up after a bad heartbreak, people who I can turn to for support because they have turned to me for support. People who define what it is to enact love.

Don't get me wrong, there are still days when the act of living, the future, it all feels impossible. Days when casual, caustic words burn deep, days of secret stairwell crying, when it's easier to say all the right things than to believe them, days that feel untenable and exhausting. Days where it's easier to dream of simpler ways out, of cutting ties and assimilating, or giving in and pretending.

But there are also days that buzz with revolutionary possibilities: alternative kinship structures and radical Islams and dreams of queer Muslim communes. It is these days that make it worthwhile in the end, days that make it possible to be queer and Muslim at the same time, to let go of the excepts, to just be.

Which I tell him about, my friend. And instead of exhaustion, feel only relief.

Lamya H is a queer, muslim writer living in New York. Her work has appeared in Black Girl Dangerous, Autostraddle, The Islamic Monthly and Tanqeed. This piece was workshopped at the Lambda Literary Writing Retreat 2015. @lamyaisangry