"Greece has a certain sensitivity to foreign ultimatums and occupations, most notably on the part of Germans" 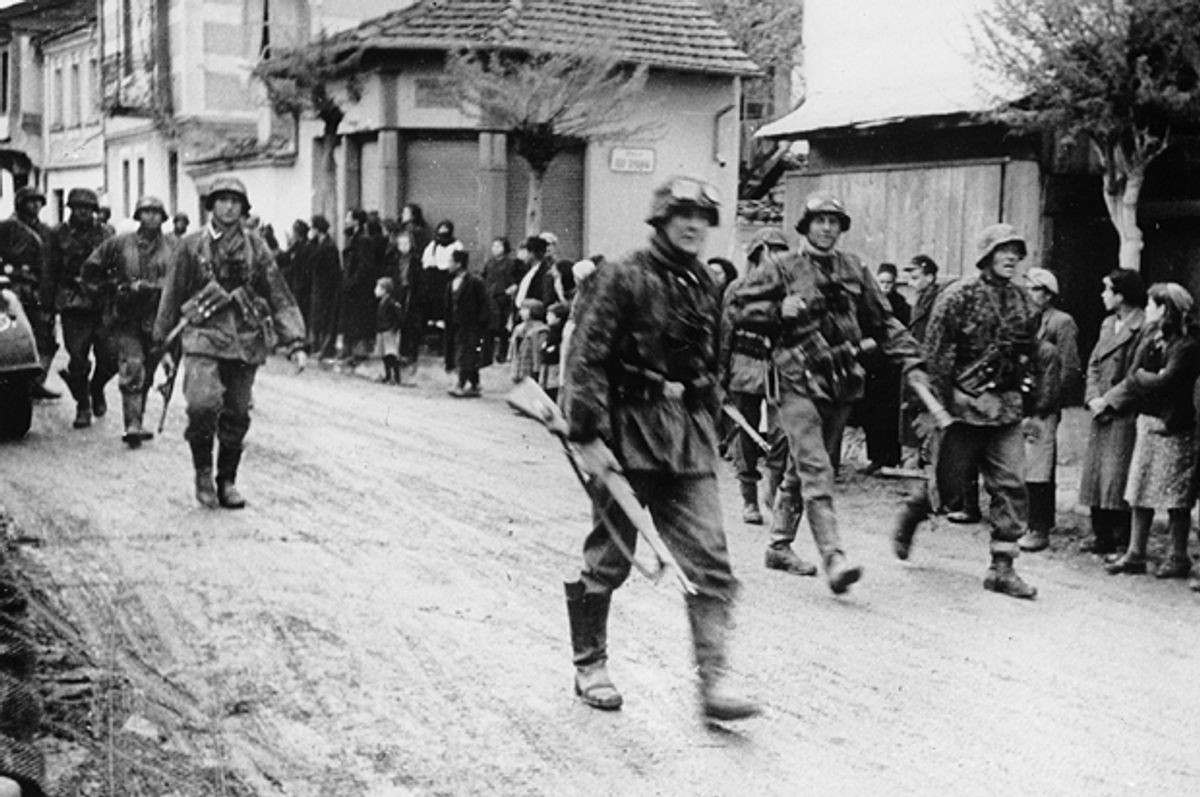 Local citizens line the street as they watch the invading German troops move through, at an unknown Greek town, on May 16, 1941. (AP)
--

Excerpted from "Debtors' Prison: The Politics of Austerity Versus Possibility"

A few words on Greek history are in order. The Greek national memory is replete with foreign occupations, humiliations and diktats. The Ottoman Turks ruled Greece from the fifteenth century until the nineteenth. Greece declared independence in 1821, a cause broadly supported by European public opinion, though it took six years and the intervention of a French, British, and Russian armada in 1827 to finally oust the Turks. The nascent Greek state took advantage of the broad support for its revolt against the Turks and floated an independence loan. The government defaulted in 1826, even before Greece had fully expelled the Turks, shutting Greece out of European capital markets for the next fifty-three years. The European powers selected a king for newly independent Greece, seventeen-year-old Prince Otto of Bavaria, who spoke little Greek. Otto was expelled in 1862 and replaced by a Dane, George I of Schleswig-Holstein, who reigned until 1913, when he was assassinated.

In World War I, Greece fought on the Allied side against Germany, Austria, and Turkey. After the war, the victorious powers awarded Greece several islands that had been under Turkish control, as well as the predominantly Greek city of Smyrna on the Turkish mainland and a surrounding Greek-speaking enclave. But when the Turks invaded in 1922, the Allies did not come to the aid of the Smyrna Greeks. Hundreds of thousands died, and over a million ethnic Greeks from ancestral homelands in the Asia Minor regions of Ionia, Pontus, and Eastern Thrace were deported to European Greece, where they had never lived. The massacre at Smyrna was second only to the genocide of the Armenians in the catalog of World War I-era Turkish atrocities.

After a period of unstable semi-democracy under a still-influential Greek monarchy, General Ioannis Metaxas, a fascist, seized power in a coup in 1936. When World War II broke out, he sought to keep Greece neutral, but Mussolini demanded the right to occupy several Greek strategic sites. Metaxas refused, leading Italy to invade. The smaller Greek army humiliated the Italians in the war’s first defeat of the Axis powers. Hitler rescued his hapless ally with a blitzkrieg attack and invasion in April 1941.

The German occupation of Greece was one of the most brutal in Europe. The local economy was destroyed, and food was in extremely short supply. In Athens alone, at least 250,000 civilians died of starvation. The small Greek Jewish community, dating to antiquity, was all but annihilated. Partisan guerrillas of the Greek resistance made forays from the mountains, and in retaliation Nazis wiped out entire villages thought to harbor sympathizers. The resistance was mostly led by communists, but it included a broad range of anti-Nazis working with British and U.S. intelligence as well as with the Soviets.

The Germans were pushed out of Greece in October 1944, and the aftermath was unlike what ensued in any other occupied European nation. At a Moscow meeting that month, Stalin and Churchill agreed to a pact making the Balkans a Soviet sphere of influence—with the exception of Greece, where the British would be dominant. In the anarchy that followed the German withdrawal, civil war between the resistance and pro-Nazi Greeks broke out in early 1945. To stabilize affairs and prevent a communist victory, the British openly backed right-wing Greeks who had been prominent Nazi collaborationists during the occupation. As the Cold War intensified, the United States, under the Truman Doctrine, provided aid to the anticommunist side, leading to a right-wing victory in 1949.

Elsewhere in postwar Europe, Nazi collaborators were disgraced, imprisoned, and barred from politics. In Greece, they became the ruling elite. A repressive formal democracy was restored in 1949, only to fall to a dictatorship that lasted from 1967 to 1973. Greece at last became an effective democracy in 1981, when the first PASOK government broadly restored civil rights to former anti-Nazi resistance fighters and sponsored a referendum ending the monarchy. Thus Greece has a certain sensitivity to foreign ultimatums and occupations, most notably on the part of Germans.