"Bachelorette" Kaitlyn rejects slut-shaming, sexist trolling and death threats: How one woman is forcing the retrograde show to reckon with its own demons

Kaitlyn's sex-positive attitude has attracted an extraordinary measure of abuse 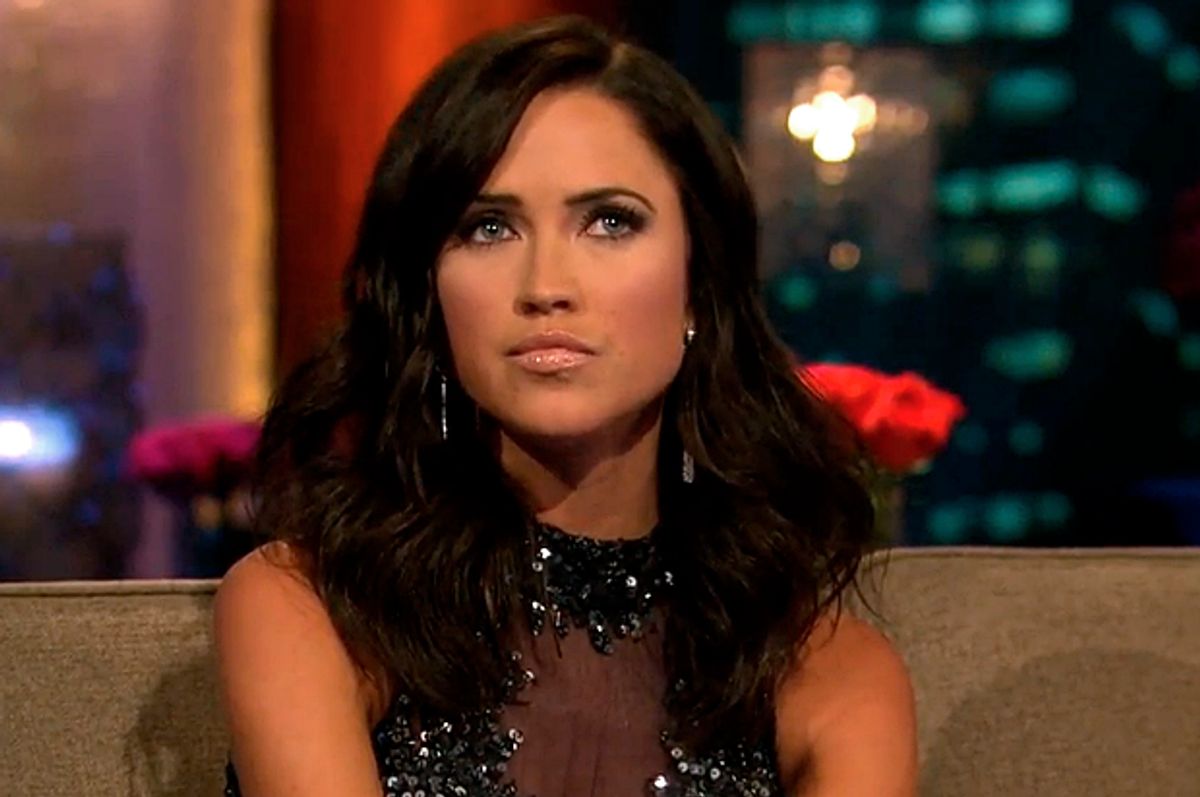 Kaitlyn Bristowe in "The Bachelorette" (ABC)
--

Last night on “The Bachelorette’s” “Men Tell All” episode, host Chris Harrison took some time out of the usual formalities to address the unprecedented torrent of online hate that has been directed at Bachelorette Kaitlyn Bristowe over the course of this season.

Throughout the season, the men themselves often criticized Kaitlyn for having an approach to sexuality that was modern and mature, instead of something out of a Victorian courtship manual. From human trash-bag Ian shaming her for wanting to “make out with a bunch of dudes on TV” to the constant emphasis on Kaitlyn's “mistake” of having sex with Nick early on, our latest Bachelorette has received more than her fair dose of the slut-shaming culture that the franchise has historically trafficked in.

But, as Harrison revealed last night, the shaming that Kaitlyn experienced from her suitors was nothing compared to what was happening online.

“We’ve always had a fair amount of controversy, especially around issues of appropriate behavior, gender roles, what should and shouldn’t be shown on television,” said Harrison. “These have always been issues that we’ve embraced here on The Bachelor.”

“What you’re dealing with is something completely different,” the host continued, after which he proceeded to read some of the vicious online trolling that Kaitlyn has received, including being labeled a slut and whore and all the other lovely things that women who live public lives are often so casually dubbed.

“I’m so fine with people disagreeing with me or having their opinions — that’s OK,” said Kaitlyn, fighting back tears. “The hardest part is it affects my family. I like to think that it doesn’t matter what people think about me, but when it’s thousands and thousands [of comments] just pouring in of people hating… I get death threats."

As Harrison read a series of the tweets out loud, the camera cut to the aghast faces of the men. ("Wow," murmured Ben Z, looking positively stunned.) Afterwards, the entire group stood and gave her a standing ovation. While many of the men understandably don’t have the warmest feelings toward Kaitlyn at this point in the process, seeing the looks of shock and surprise on their faces as they realized what she had to contend with as a result of her interactions with them was profound, and represented a surprisingly teachable moment for a group of men realizing firsthand what it’s like to exist as a woman in the world.

The conversation around trolling and public shaming online — particularly as it affects women — has been picking up steam lately, from the atrocities of Gamergate to the chaos over at Reddit. Likewise, Kaitlyn’s experience is reminiscent of the shaming inflicted on other famous young women in the public eye, from Kristen Stewart's tabloid pummeling over her 2012 cheating scandal to Angelina Jolie being shamed as a "man eater" after Brad Pitt left Jennifer Aniston for her. But it's impressive and unusual to see this conversation play out in the realm of reality television, which is arguably a few steps behind when it comes to progressive gender politics and rarely takes an unfiltered look at the sort of deeply-ingrained attitudes that undergird its salacious business model.

The upside of this whole nasty business is that having a woman like Kaitlyn as The Bachelorette — a woman who is sex-positive and unashamed of her own sexual agency — has forced a retrograde and inherently sexist franchise to reckon with some of its own demons. Admittedly, the show’s own morality, from its relentless prudishness about sex to its old-fashioned approach to heterosexuality, are part and parcel with the misogynist, backward universe that Kaitlyn’s trolls reside in. Harrison himself -- who has openly said there could never been a gay "Bachelor," engineered this season's demeaning "two Bachelorettes" stunt and thinks that the female orgasm sounds like a "pop" -- regularly pays lip service to the show's old-fashioned attitudes. Seeing Harrison condemn Kaitlyn’s critics for their treatment of her is, if not a silver bullet, a step forward for the franchise as a whole, and for the many women who watch it and buy into its fantasy. As he put it, "I would take you as a role model for my kids over anybody who would be a cyberbully and spew that kind of hate."

And honestly, Kaitlyn is a role model, unwitting though she may be. Thanks to Kaitlyn, this season has evolved from being the least progressive in the show’s history to one that has rewritten the rules of the franchise. In public statements, Kaitlyn has consistently stood by her own actions, even if the show's editing has tried to impose a framework of guilt around them. As she told ET after the show revealed she had slept with Nick off camera, "I don’t think that’s a crazy thing to sleep with somebody when you’re trying to be in a relationship with them. I’m a 30-year-old woman, and I make my own decisions, and intimacy, to me, is part of a relationship. I don’t know why everyone is so shocked by it.”

In New York Magazine today, writer Jada Yuan dubbed Kaitlyn the franchise's Katniss Everdeen, writing: “What’s made this best season of 'The Bachelorette' ever so heartening has been Kaitlyn’s willingness to call bullshit on the very structure and precedent of the show while also taking its perks and its paychecks." From sneaking her own off-camera time with the men to acknowledging that sex is something that happens outside Harrison-authorized “Fantasy Suites," Kaitlyn has upended all the old Bachelorette traditions. As such, Yuan writes, “we’ve been witnessing one of the most formulaic shows on television having to chase its star, rather than the star bending to the rules of the show."

Unfortunately, Kaitlyn’s unwillingness to play by the rules has made her, more than ever, into a target of online hate, although she has been impressively gracious in dealing with it. Here is today's excerpt from her People magazine blog (which is always remarkably candid and sincere compared to Farmer Chris' grade-school journal entries):

The "haters" go out of their way to shame me for my behavior and don't acknowledge their own. I made mistakes and went through tough times. I did things that I would do in a relationship. I was being true to myself. You don't have to agree with it, but don't tell me I should crawl in a hole and die.  The silver lining in this is that I have a unique opportunity to help bring more awareness to online bullying. People have taken their own lives due to this terrible issue. I am fortunate I have thick skin and can maybe use my experience to help others... To everyone who has supported me along this journey, even if you didn't understand my choices, thank you.”

For a show that trades in fantasy, it has been refreshing to see an authentic, flawed, unabashedly modern woman approaching sex, dating, marriage, monogamy and romance in a way that reflects how things happen in the real world. Alas, an unfortunate reality of being a real woman in today’s world is being subjected to shaming, scorn and vitriol at every turn. Kudos to “The Bachelorette" (yes, even you, Chris Harrison!) for briefly dropping the rose-tinted glasses and showing us both sides of that fraught coin.