Netanyahu's self-serving scare tactics: Why his Iran fear-mongering is riddled with contradictions

Israel's leader is doing his best to scare Americans into nixing the Iran deal. But what he's saying makes no sense 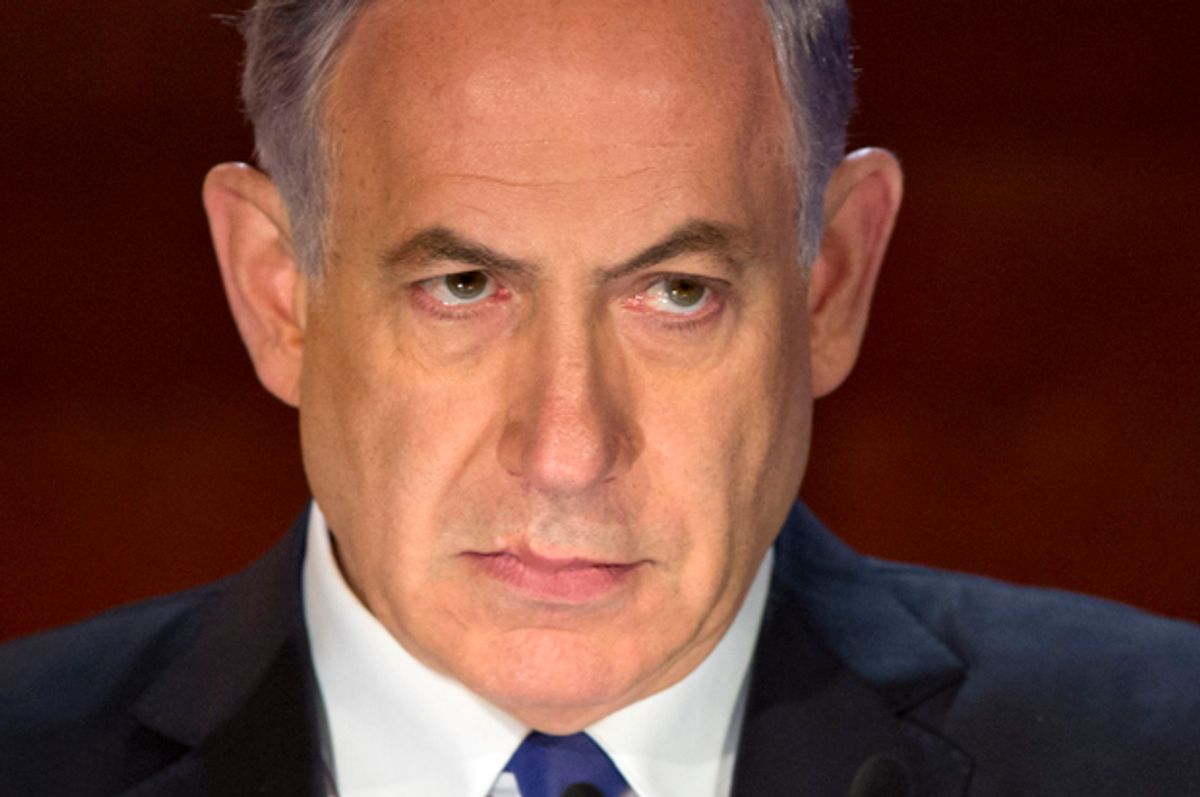 The globe’s loudest critic of the Iran deal, Israeli prime minister Benjamin Netanyahu, is looking to go nuclear himself in his hard sell to Washington to kill the historic agreement. On CBS’ “Face the Nation” on Sunday, Netanyahu pivoted from his standard rhetoric on protecting Israel to tease the specter of Iran attacking the United States mainland with nuclear missiles. He warned that the deal allowed for resumptions of weapons programs that would fail to protect Americans against “the missiles they’re developing for you.”

“They’re not developing these intercontinental ballistic missiles for us—they’re developing them for you,” Netanyahu continued. “And they’ll be able to tip them with nuclear warheads…”

Those ICBMs might have trouble reaching the United States what with the sky being nearly full of all the pigs flying. It’s of course a preposterous suggestion that Iran has the first intention of launching a nuclear missile at the U.S. A nuclear attack against Israel alone would be tantamount to national suicide for Iran, and launching so much as a bottle rocket at American soil would ensure that only an Iran-shaped hole sits between Iraq and Afghanistan.

The scare tactics run entirely counter to everything else we’re supposed to believe about the leadership in Tehran, both the ayatollahs and the elected government. The narrative goes like this: Ayatollah Khamenei, his clerical regime, and the president—everyone in control, essentially—are all power-hungry despots. That’s why they don’t permit true democracy, goes the story; the current system of theocratic and “elected” political control is the only way to securely hold on to that sweet, sweet power. The theocrats, while genuinely of faith to some degree, cynically use theology to justify their power, it is skeptically asserted. The regime even wants to extend that power, according to the narrative, and become a regional hegemon through their arming and funding of Shiite militias like Hezbollah. Ayatollah Khamenei is said to “amass assets worth tens of billions of dollars” through a cleric-run financial empire.

They’re self-interested actors, in other words. They’re power- and money-hungry gluttons for power. That's the narrative. In the 2009 preview to the Arab Spring, the regime put down the Green Revolution in order to maintain their hold on the power they so love. Their actions, whether against their own people or against regional actors, are like those of any power-loving cabal of tyrants. It accords with what we know about history and human nature: The rulers in Tehran, like all people before and after them, love power, seek it, and act to protect it when it’s theirs.

And yet we’re to believe simultaneously that they’re suicidal, that they’re champing at the bit to do the one thing that would end their fun. It’s suggested by critics of the deal that Iran, upon gaining its first nuclear missile, would just lob it, essentially by impulse, toward Israel, whose vast nuclear arsenal, perhaps the best pound-for-pound weapons system in the world, is enough to turn Iran into a sheet of glass. For Iran to launch a single missile is to ask the western sky to fill with Israel’s many missiles within minutes.

People who love their power and wealth don’t tend to commit suicide en masse. Because that’s what pushing the launch button means for that entire leadership. A report earlier this year reveals that the Pentagon marvels that Israel’s nuclear capacity is “an almost exact parallel of the capability currently existing at our National Laboratories.” Israel has as many as 300 nuclear weapons, according to former president Jimmy Carter’s estimate.

But now we’re supposed to believe that Iran might even forego their Israeli path to suicide and opt to eliminate themselves more grandly with an American assault. The US has more than 2,000 active nuclear weapons deployed around the world, with more than Israel’s entire arsenal in Europe and on our nuclear submarine fleet alone. These are missiles that have undergone decades of advancement. They’ve been tested. Meanwhile, Iran might be able to begin testing an ICBM in 2015, according to a Pentagon report. Iran is in the kindergarten of this sort of warfare and the US is an Ivy League professor. I wonder who does better at test time?

Prime Minister Netanyahu’s scare tactics aren’t a revelation of Iran’s power but of his own weakness in terms of the deal’s ratification. He expects the American people to believe impossible things about the Iranians. It’s not that there’s a single dictator like North Korea’s Kim Jong-un, who could be imagined perhaps to break with reality and commit suicide via nuclear. No, Netanyahu wants us to believe that a vast network of actors—the ayatollahs and the president and their advisors and staffs, the negotiators for the recent deal, their own staffs, et al—are all waiting for the day when they can end the comfort and power and wealth they’ve worked so hard to gain. To say that it strains credulity is an understatement. How much of what Netanyahu says is similarly overblown? Israel does face threats from groups at its borders. How do we evaluate those threats as Netanyahu describes them now that his capacity for insane hyperbole is fully known? Is Hamas the threat he says it is? Is Hezbollah? How are we to know now?