Sanders, the sole Jewish candidate in the 2016 race, accused of peddling "national socialism" 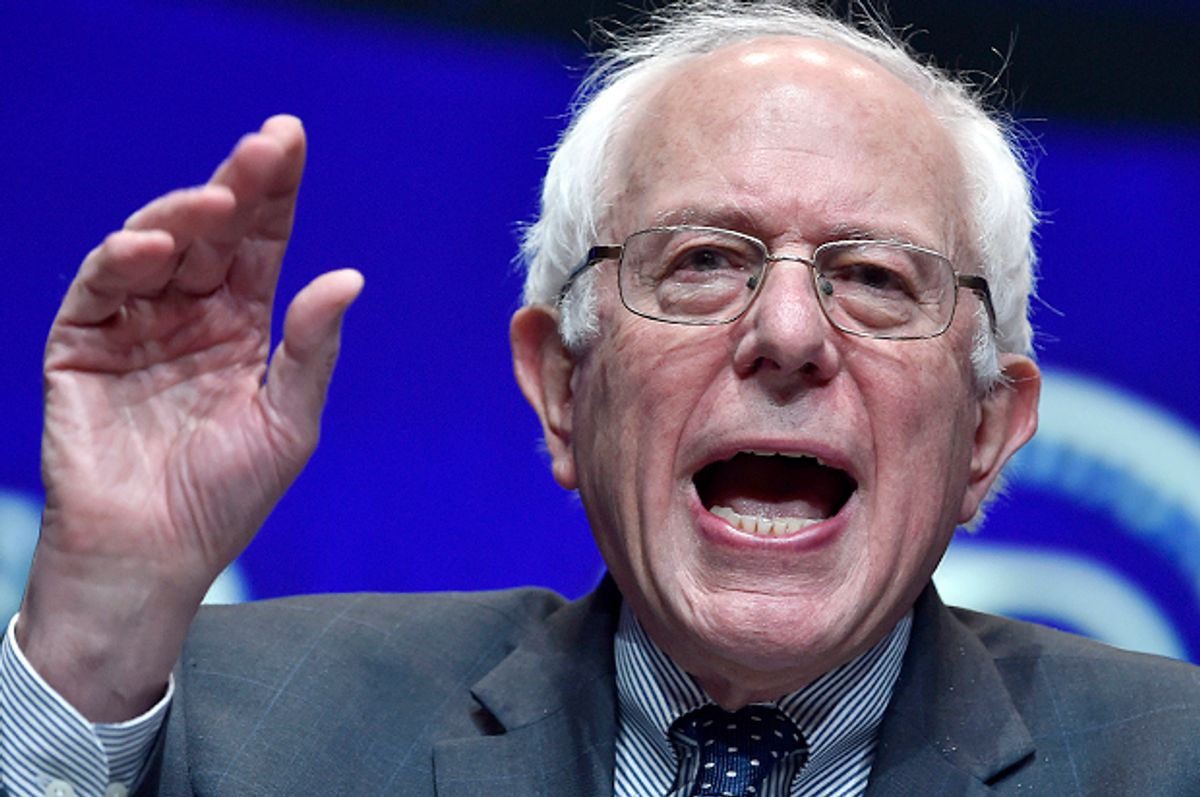 Williamson drew the comparison in a National Review column published on July 6 and adapted for National Review Online this week. Williamson describes Sanders as a "weirdo socialist from Soviet Beninjerristan" and dismissively refers to Democratic presidential candidate Hillary Clinton as "Herself." Williamson attends a Sanders rally in Iowa and quickly mocks Sanders supporters as "kids play-acting at politics" before accusing the campaign of planting volunteers in the audience to gin up support. "You get the feeling that after a beer or three one of these characters is going to slip up and let out a “comrade.” If it’s anybody, it’s probably going to be the grandmotherly lady in the hammer-and-sickle T-shirt," Williamson writes. He then goes on to accuse the Sanders campaign of an "incessant reliance on xenophobic (and largely untrue) tropes holding that the current economic woes of the United States are the result of scheming foreigners":

Aside from Grandma Stalin there, there’s not a lot of overtly Soviet iconography on display around the Bernieverse, but the word “socialism” is on a great many lips.

L’Internationale, my patootie. This is national socialism.

In the Bernieverse, there’s a whole lot of nationalism mixed up in the socialism. He is, in fact, leading a national-socialist movement, which is a queasy and uncomfortable thing to write about a man who is the son of Jewish immigrants from Poland and whose family was murdered in the Holocaust. But there is no other way to characterize his views and his politics. The incessant reliance on xenophobic (and largely untrue) tropes holding that the current economic woes of the United States are the result of scheming foreigners, especially the wicked Chinese, “stealing our jobs” and victimizing his class allies is nothing more than an updated version of Kaiser Wilhelm II’s “yellow peril” rhetoric, and though the kaiser had a more poetical imagination — he said he had a vision of the Buddha riding a dragon across Europe, laying waste to all — Bernie’s take is substantially similar. He describes the normalization of trade relations with China as “catastrophic” — Sanders and Jesse Helms both voted against the Clinton-backed China-trade legislation — and heaps scorn on every other trade-liberalization pact. That economic interactions with foreigners are inherently hurtful and exploitative is central to his view of how the world works.

He goes on, attempting to clarify his mixed-up comparison:

F. A. Hayek’s Road to Serfdom notwithstanding, corralling off foreign-made cars does not lead inevitably to corralling off foreign-born people, or members of ethnic minorities, although the Asians-and-Latinos-with-their-filthy-cheap-goods rhetoric in and around the Bernieverse is troubling. There are many kinds of Us-and-Them politics, and Bernie Sanders, to be sure, is not a national socialist in the mode of Alfred Rosenberg or Julius Streicher. He is a national socialist in the mode of Hugo Chávez. He isn’t driven by racial hatred; he’s driven by political hatred. And that’s bad enough.

While Williamson attempts to clarify that his multiple references to national socialism are in no way an implicit comparison to Nazism, his description of the Citizens United Supreme Court decision is almost as absurd:

And criminalizing things is very much on Bernie’s agenda, beginning with the criminalization of political dissent. At every event he swears to introduce a constitutional amendment reversing Supreme Court decisions that affirmed the free-speech protections of people and organizations filming documentaries, organizing Web campaigns, and airing television commercials in the hopes of influencing elections or public attitudes toward public issues. That this would amount to a repeal of the First Amendment does not trouble Bernie at all. If the First Amendment enables Them, then the First Amendment has got to go.

Of course, Williamson is no stranger to controversy as the author of articles like “Laverne Cox is not a Woman” and another comparing campus sexual assault awareness campaigns to the "Salem Witch Trials."