"Sharknado 3: Oh Hell No": The inevitable apocalyptic climate catastrophe we know we can defeat (with chainsaws!) 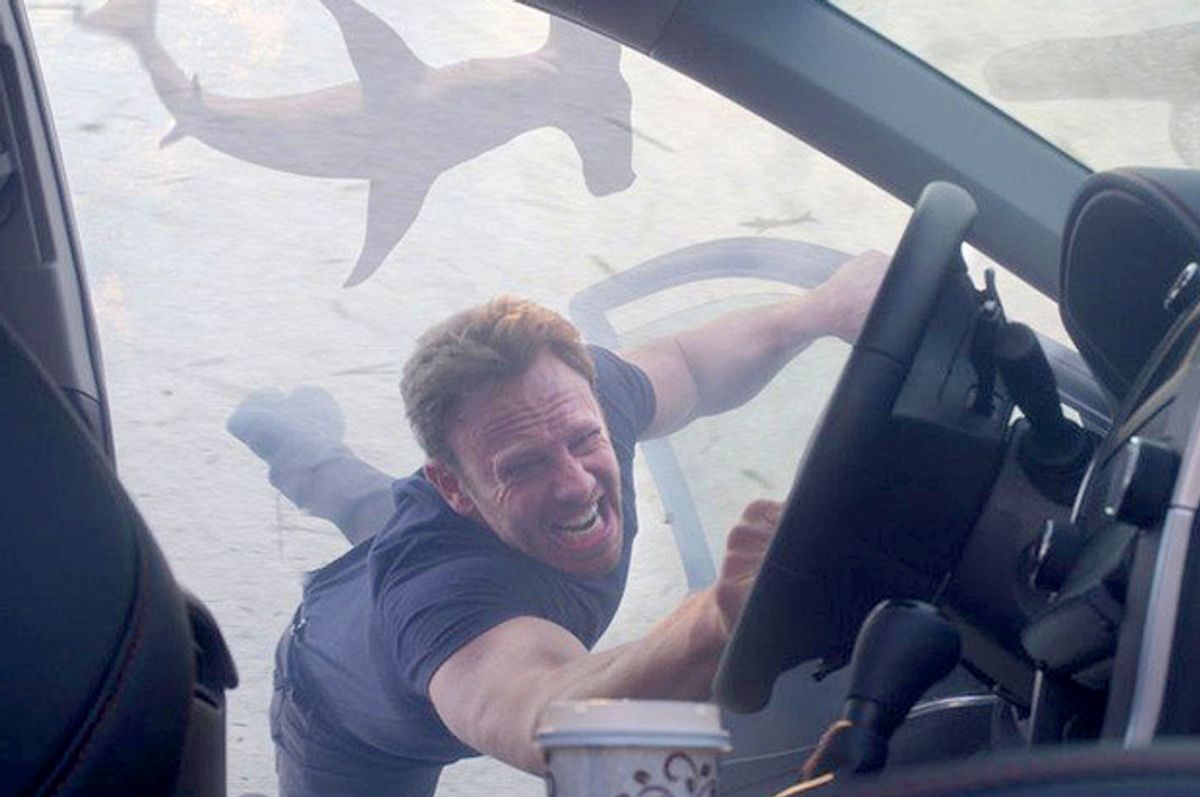 I recently discovered that the city I call home will likely be uninhabitable in the span of just a few decades. Leading climate scientist James Hansen just released a study predicting a 10-foot rise in sea levels in as little as 50 years. As Eric Holthaus at Slate put it, “The implications are mindboggling: In the study’s likely scenario, New York City—and every other coastal city on the planet—may only have a few more decades of habitability left.” The study includes the astonishing conclusion that—well, I’ll let Hansen et al tell it:

We conclude that continued high emissions will make multi-meter sea level rise practically unavoidable and likely to occur this century. Social disruption and economic consequences of such large sea level rise could be devastating. It is not difficult to imagine that conflicts arising from forced migrations and economic collapse might make the planet ungovernable, threatening the fabric of civilization.

I’ve thought about this a great deal, and I am relatively certain that after the collapse of civilization, TV critics for the internet will not be vital and productive members of society. (After all, ask any commenter: We’re not vital and productive members of society now.) Perhaps even in the post-civilization—dominated either by fascism or pure anarchy, depending on which dystopia you subscribe to—there will be jerry-rigged power grids and even televisions, but it’s hard to imagine that the collapse of civilization will support a massive and far-reaching industry of television shows, let alone an internet on which to publish snarky critique. If I wanted to maximize my genetic code’s chances for survival, I probably should have moved to Denver and become a carpenter—or, you know, not bothered with sinking money into a New York apartment that will be waterlogged in my lifetime. I probably should also rethink my plans for reproduction. Babies are wonderful, but what kind of world would they be living in? What would I really be able to leave them?

Naturally, I then turned my attention to “Sharknado 3: Oh Hell No,” premiering Wednesday night on Syfy. We are living in the third summer of “Sharknado,” which is itself some kind of harbinger of the apocalypse; the first straight-to-TV film was made as a quasi-joke and became an unexpected hit, mostly because people could not stop tweeting “SHARKNADO????” to each other as it was on air. A sharknado is a tornado full of sharks. The sharks start in the ocean, but then freak storm conditions somehow whip them into the air, and then the sharks attack humans, and the valiant humans save the day—mostly with chainsaws.

“Sharknado” was followed by “Sharknado 2: The Second One,” which was almost equally glorious in its nonsensical sharknado-ing. The movies are pure schlock, but they know it, meaning that the entire enterprise unfolds with a constant wink-and-nod to the camera; to borrow an observation from fellow critic Genevieve Valentine, it brings the drive-in experience home, combining the enjoyment of a very silly movie with that of sharing it with friends, either on the seat next to you or on Twitter. With the first film’s success, “Sharknado 2” and “Sharknado 3” have actually become somewhat studied efforts on the part of NBC Universal; both films are stacked with celebrity cameos, cherry-picked from the D-list. “Sharknado 3: Oh Hell No” offers up Reddit founder Alexis Ohanian, reality-TV entrepreneur Mark Cuban, talk-show host Jerry Springer, and Real Housewife Kim Richards, along with has-been talking head Ann Coulter and has-been politician Anthony Weiner, both desperately attempting relevance. In “Sharknado 3,” Coulter plays the vice president and Cuban, the president; there is, indeed, a political plotline, as sharknadoes come to threaten nothing less than national security. Frankie Muniz is called to action. Ronald Reagan is invoked, as are NASA, NOAA, NASCAR, and Universal Studios Orlando; “Sharknado” ain’t playing, either with the seriousness of its mission or with its product placement.

What “Sharknado 3: Oh Hell No” hopes is that you will find the stupidity captivating; the line between a great film and a terrible one is sometimes very hard to find. The “Sharknado” franchise has so far been very good at being outsize and irrelevant enough to bother no one. Perhaps this third one will exhaust the audience’s desire for sharks sliced in half by chainsaws; perhaps not. (Oh hell, no.) But in a world where it’s hard to pinpoint the bad guys, it’s nice to agree that we can all cut up sharks when they spew out of the ocean in vaguely conical formations. Indeed; we should be so lucky, to have sharks attacking us in such massive numbers that they can occupy a city. Instead we are slowly killing them—and everything else in the ocean—by making seawater more and more acidic. Predators like sharks are at the top of the oceanic food chain, meaning they’ll get wiped out first. “Sharknado” identifies that the real danger facing humanity is the unpredictable, ever-fickle weather; weather systems that happen where and when they shouldn’t, causing untold destruction on major American cities.

No, I’m not saying Sharknado is a parable for climate change; and no, I’m not saying we are the sharknado, either (although let’s revisit that when we’re all more stoned). I’m saying “Sharknado” is a horror film masquerading as a wistful dream, a desperate fantasy. The “Sharknado” franchise is beginning-to-end a celebration of humans—Americans!—using their might to destroy various obstacles, with either good old fashioned guns or lumberjack chainsaws or a bomb at the top of the Empire State Building or any other completely nonsensical combination of patriotism, machismo, and an enemy. And as such it reads like a desperate fantasy of what we wish the battle against horrific climate change would be like. If only there was a thing you could just slice in half, or an explosion that had to go off at the right moment. We’re so good at that.