Ohio's GOP governor should be in position to be his party's nominee. His problem? He's actually a man of faith 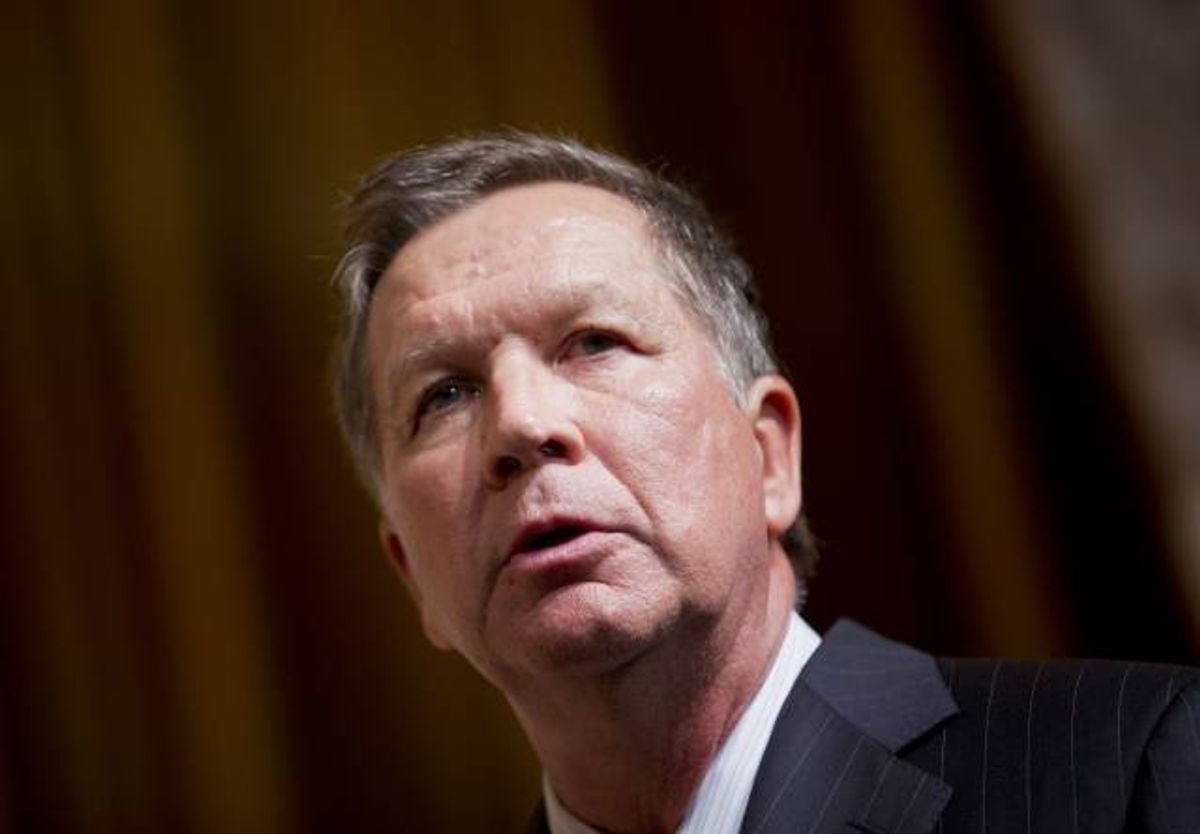 Every week, Monday brings with it a few rituals. Coworkers ask one another perfunctory  questions about their weekend; media bloggers publish their take on the previous night’s episode of the prestige TV drama of the moment; millennials roll their eyes at their parents for posting Garfield memes. For this summer, though, there’s an extra one: A Republican politician — one who will almost certainly lose — declares they are running for president. This week, it’s Ohio Gov. John Kasich’s turn.

As my colleague Heather Digby Parton has keenly noted, Kasich is a bit of an odd bird. And as my colleague Luke Brinker has clearly shown, Kasich’s reputation for moderation is wildly exaggerated. Both of those aspects of Kasich are important to know if you want to understand the man — and as far as politicians go, Kasich is more interesting and worth understanding than most. But I don’t think either can explain why his chances of winning are so slim. (In fact, in this context, his not being a real moderate is a point in his favor.)

What’s more likely to sink Kasich than his purportedly hair-trigger temper or his belief in a balanced budget amendment is, ironically, the one aspect of his political identity that you’d think would be most helpful: his faith. Kasich is an evangelical Christian but was raised Catholic, one passionate and devoted enough to have seriously considered becoming a priest. And ever since Kasich decided to almost single-handedly sign Ohio up for the Affordable Care Act’s Medicaid expansion, he’s defended the move on religious grounds. He’s done this over and over again.

For example, here’s a report on what is the thus far the most infamous dust-up Kasich has had with a fellow conservative over Medicaid. The setting is a 2014 Koch brothers-organized conference of politicians and party donors. Kasich is taking questions from the audience, and receives a pointed one from the wife of Randy Kendrick, the wealthy GOP moneyman who owns the Arizona Diamondbacks. She apparently isn’t happy that Kasich has defended the move by citing his religion’s demand to care for the poor; and he, apparently, does not feel inclined to give a damn:

The governor’s response was fiery. “I don’t know about you, lady,” he said as he pointed at Kendrick, his voice rising. “But when I get to the pearly gates, I’m going to have an answer for what I’ve done for the poor.”

The exchange left many stunned. About 20 audience members walked out of the room, and two governors also on the panel, Nikki Haley of South Carolina and Bobby Jindal of Louisiana, told Kasich they disagreed with him. The Ohio governor has not been invited back to a Koch seminar — opportunities for presidential aspirants to mingle with the party’s rich and powerful — in the months since.

A Kasich spokesman, Chris Schrimpf, declined to comment on the episode.

Now, obviously, just from the amoral stance of what is the right move for a professional politician, jabbing your finger at a potential donor and calling her “lady” is stupid. And just from the stance of not coming off like a sexist jerk, calling a female donor who has no less a right to be in the room than anyone else “lady” is not a good look, either. But while this anecdote shows that Kasich has a temper and does not like to be challenged in public, it also shows something else. Namely, that he takes the mandates of his faith at face value — and with the utmost seriousness.

As Elizabeth Stoker Bruenig wrote last year in Salon, for Kasich “Christian ethics precede party politics.” He may understand that expanding Medicaid — and therefore accepting a key provision of the hated Affordable Care Act — was, within the moral universe of Republicanism, the “wrong” thing to do. But Kasich doesn’t care, because he doesn’t believe that the moral universe of Republicanism is (or should be) a real thing. He’s a Christian; his moral universe is centered on Jesus Christ. If the choice is between pleasing God and pleasing Grover Norquist, he won’t think twice.

I am not a Christian — or a believer of any kind, for that matter. But I do see poverty through a lens that many would call post-religious. I can reel off studies and stats to back-up the contention that allowing people to be poor is bad economics and myopic public policy; but I can’t deny that I find iniquity of the kind the Medicaid expansion is intended to address profoundly offensive, too. And Lord knows the tenets of movement conservatism, which is currently synonymous in the eyes of many with the Republican Party overall, is extremely low on my shit-giving list.

So I like Kasich’s answer here fine. It’s my favorite thing about him, in fact. But although partisan Republicans spend an inordinate amount of time asserting their Christianity and their devotion to people of all faiths, we live in a secular society — and most of us are primarily driven by secular concerns. That’s one of the ways to explain the rise of the “prosperity gospel”; and it’s one the ways to explain how Jesus’s command to “render unto Caesar” that which is his has led — on a superficial level, inexplicably — to phenomena like Mike Huckabee’s two presidential campaigns. Faith and politics can exist in tandem in America, but only if the former is ultimately subordinate.

That, in the end, is what I suspect we’ll be reminded of by the time Kasich’s candidacy is over. It won’t necessarily mean that most self-styled Christian conservatives are hypocrites (though that certainly seems often to be the case) or that they want to see the poor needlessly suffer from inadequate health care. What it will mean instead is that even though tribal identity is as influential as ever when it comes to democratic politics, the hard lines delineating one tribe from another have changed. In the theology of modern American politics, it’s your party affiliation — not your religion — that you’ll be asked to disclose at the pearly gates.