The taxes chainsaw massacre: Rand Paul is desperate for your attention

Rand Paul is slipping in the polls and wants people to notice him again, so he's busting out the power tools 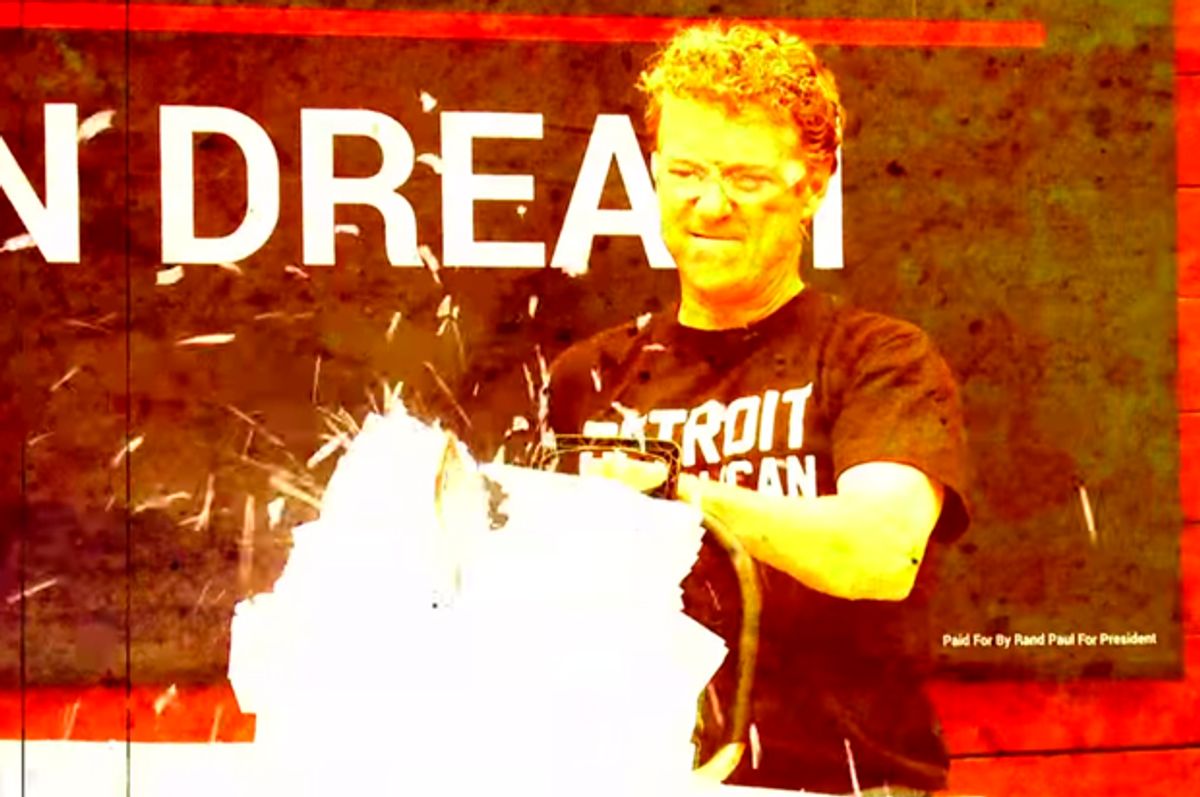 The 2016 campaign hasn’t been proceeding in accordance with Rand Paul’s expectations. He jumped into the race hoping to be the “different kind of Republican” who would capture the affections of younger and libertarian-leaning voters and soak up press attention as the idiosyncratic candidate in the Republican field. That hasn’t happened. His fundraising has been lackluster, he’s slipping or treading water in both national and state polls, and the army of diehard supporters his father once commanded views Rand skeptically because of his increasingly hawkish views on foreign policy.

Paul’s campaign tried explaining it all away as part of a deliberate strategy – Rand is playing the “long game,” they said, he doesn’t need the attention or even the sky-high fundraising. He has his slow-burn game plan and he’s sticking to it.

Well, that explanation is apparently no longer operative. With Donald Trump dominating all the headlines and the first primary debate just a couple of weeks away, Rand Paul is trying to get people to notice him again. Which means it’s CAMPAIGN GIMMICK TIME!

Here’s the new video out from the Rand Paul anti-Washington machine, which features the senator inflicting three different forms of violence upon a printed-out copy of the tax code.

It’s just Rand Paul hanging out in his… garage, I think? And he’s doing the manly stuff that men do when they just need to bro out and have some guy time: playing with fire, waving chainsaws around, wearing jeans, putting on boots, and tucking in your t-shirt. Speaking of the t-shirt, I’m not entirely certain what the phrase “Detroit Republican” is supposed to mean, but the word “Detroit” evokes romanticized notions of the blue-collar wage earner, and it helps Rand get into character as the “working class man” who uses power tools and solves all his problems with a wood chipper.

Anyway, this is all engineered to rekindle interest in Paul’s tax plan. He debuted his proposal – a 14.5 percent flat tax – a month ago with an Op-Ed in the Wall Street Journal, and it was immediately met with harsh reviews. Liberals happily pointed out that Paul’s proposal would bequeath a massive tax cut on the wealthy and blow a several-trillion-dollar hole in the budget. Conservatives, while more sympathetic to Paul’s aims, criticized him for simply replacing existing taxes on wages with new “hidden” taxes on consumption. “What Paul is proposing is a big tax cut for high earners and businesses with almost no direct benefits for most Americans,” wrote Ramesh Ponnuru for Bloomberg.

This new video is meant to inject a bit of populist appeal into Rand’s tax vision, I suppose. It’s a radical departure from how he was selling the plan a month ago. Back then the plan’s primary appeal was its alleged macroeconomic effect. Rand wrote that it would be like a “steroid injection” for the economy that “will increase gross domestic product by about 10%, and create at least 1.4 million new jobs.” One of his selling points was the fact that he crafted it in collaboration with Art Laffer, Stephen Moore, and Steve Forbes – three wealthy conservatives who believe that cutting taxes on the rich is the greatest good one can aspire to.

Now it’s all chainsaws and wood chippers. If you’re a Regular Joe and you hate taxes, you can watch Detroit Republican Rand Paul physically destroy taxes while a Hendrix rip-off version of the Star Spangled Banner wails in the background. It’s so edgy and tough and rock-and-roll. None of that changes the fact that Rand Paul’s chief concern is alleviating the tax burden of wealthy, but look! There’s fire! And a chainsaw! Please pay attention to Rand Paul! Please please please!