Nicki Minaj tweeted a few harsh truths about the VMAs and the music industry, and Swift jumped in over her head 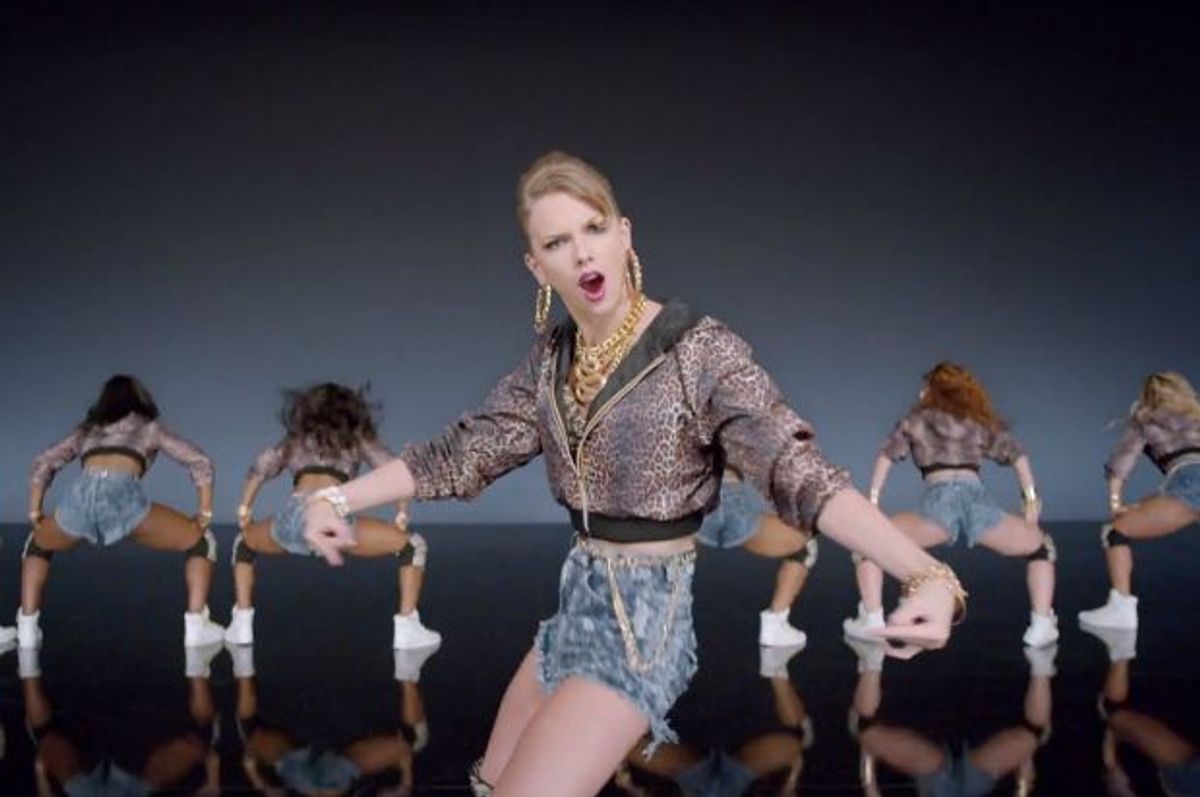 Yesterday, MTV announced the Video Music Award nominees. While the justification for these awards existing is even thinner than that of the Grammys, it is customary that a musician releasing an instantly-iconic video might expect to be rewarded with at least a nod or two for a Moon Man statuette, with the hopes of being licked on the face by Miley Cyrus if she should win. Such was Nicki Minaj's understandable disappointment when "Anaconda," her manic feminist genius send-up of Sir Mix-a-Lot's "Baby Got Back" and also by the way every misogynistic video trope under the sun, did pick up three nominations, but not for the highest honor, Video of the Year.

Minaj, never one to mince words, tweeted a shot at the system:

Somehow Taylor Swift, whose "Bad Blood" is nominated for the top award, decided it was the perfect time to resemble that remark, and she jumped in:

like anyone was talking to her in the first place:

Swift's version of speaking on this:

Let's leave aside for a second the assumption Swift seems to carry that any woman would feel grateful to be able to hold her purse while Taylor dorks her way through an appropriately mawkish acceptance speech. Nicki Minaj is many things, but she is not Lorde. How did Swift end up in this terribly awkward — yet not on-brand awkward — passive-aggressive call-out of suspected girl-on-girl anti-feminist crime in the first place, which now has Minaj fans, as well as foes of white women jumping in to hog the spotlight from women of color, murmuring "noooooooo" in unison?

Rather than assuming (forgive me) bad blood on Minaj's part with that initial tweet, Swift could have stepped back before jumping in and asked herself a few questions first. Such as:

1. What toxic mix of subconscious guilt and self-absorption makes me read Nicki’s tweet and want to make it all about me-me-me?

2. What if I only assumed Minaj was talking about me because on some level, even though I cannot yet articulate it, I am at least half-aware that I benefit personally and professionally every day from systems and institutions that assign both innocence and power to women who look like me, at the expense of other women who do not?

3. And what if my girl-power brand of generic feminism has unwittingly contributed to that oppression, and what if, upon realizing this, it begins to dawn on me that I could use my power to call attention to that inequity and actively work against it, even if it is uncomfortable to me at times or off-putting to the fans who prefer kitty-cat Instagrams — in other words, what if whatever it is that I claim has been “nothing but love & support” for Minaj hasn’t actually done shit to dismantle the severe fuckitude of the unwritten, ironclad rules, so who cares if I took down Spotify and Apple, what fucking good is that really?

4. Can I even reasonably stake something as trite as “girl power” on a video that gleefully and publicly shames and intimidates another woman, even if I do say she’s an unscrupulous business rival, by essentially flaunting the collective box office power of my meticulously-curated gang of premium BFFs — oh my god, am I going to be really embarrassed about that in 10 years?

5. What if Nicki’s right, I mean look at Ed Sheeran’s lazy-ass Video of the Year nominee “Thinking Out Loud,” wholly-unremarkable footage of that floppy-haired dancing vest twirling TV-ready Brittany Cherry around in a virginal white gauzy outfit like some kind of outtake from a bad ‘90s teen underdog movie, this is what passes for cultural impact and excellence?

6. While I’m at it, what is the deal with Marc Ronson feat. Bruno Mars’ “Uptown Funk,” which opens with a shot of the strutting body of a woman whose face I’m never allowed to see and quickly turns to a celebration of the male ensemble, vamping and dancing for each other and occasionally catcalling a parade of more women whose faces we aren’t allowed to see, save one auntie-like figure under the lone hair dryer not commandeered by this preening group of beauty-shop infiltrators, her visible face and bemused expression clearly a sign that she is not to be regarded as a sexual being, I mean Jesus, if you just watch it with the sound off, the Madonna-whore complex on this retrograde sanitized sleaze, am I right?

8. What if I decided to listen more than I talk in these situations, even if faux-dorky nervous-talking and -flailing are my hackneyed trademarks, a messiness I am indulged because women like me aren't automatically assumed to be angry or uneducated or out of control, and to consider how I have unconsciously profited off of the genius and work of female musicians of color, and what I might do in the future to balance those books? 10. Is it too late to just say fuck all this hollow bullshit I bought into when I was 15 and go study in solitude for a year or two with the nuns who are screwing Katy Perry over on that real estate deal? And can I take my cats?