10 "Seinfeld" episodes that are racist and sexist in retrospect

Your favorite TV show is problematic 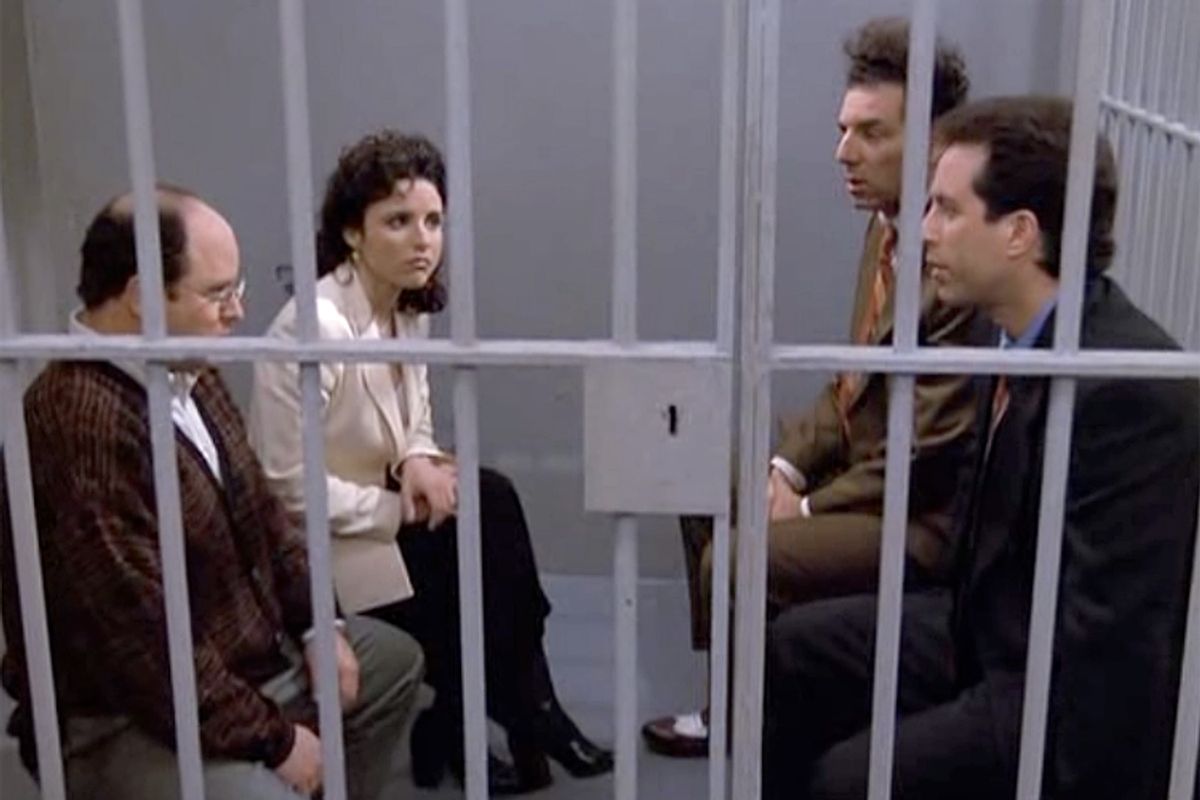 In case you’ve been hiding under a rock or aren’t in a serious relationship with every online streaming service like I am, you’ve probably noticed that episodes of Seinfeld are all available to stream on Hulu. As I’ve been spending my summer rewatching all nine seasons, I’ve noticed that it still remains a funny and original show, but is unapologetic about its lack of diversity. Like HBO’sGirls, it focuses on four narcissists living in New York City. Seinfeld’s characters are often without jobs, yet somehow afford spacious Upper Westside apartments. They move about the world totally oblivious to their white privilege.

As Jerry Seinfeld has said, he is opposed to adhering to political correctness in comedy. "I don't play colleges, but I hear a lot of people tell me, Don't go near colleges. They're so PC." He has dismissed critics who point to the show’s lack of diversity, replying, “People think it’s the census or something, it’s gotta represent the actual pie chart of America. Who cares? Funny is the world that I live in. You’re funny, I’m interested. You’re not funny, I’m not interested. I have no interest in gender or race or anything like that, but everyone else is, kind of with their little calculating, 'Is this the exact right mix?' To me, it’s anti-comedy, it’s more about PC nonsense than are you making us laugh or not.”

While the show features Jewish characters (and was even criticized by NBC’s Brandon Tartikoff for being “too Jewish”), critics lamented the show’s lack of diversity even in the 1990s. “The show has never been terribly concerned with political correctness. Its depictions of minorities, from Babu the Pakistani who was eventually deported because of Jerry’s carelessness to the Greek diner owner with an apparent yen for amply endowed waitresses, can be patronizing. And its attitudes toward women can become downright hostile, as the final episode illustrated with its portrait of a gleefully nasty female network executive,” said New York Times writer John J. O’Connor.

Comedians often use politically incorrect language to comment on larger social issues, and Seinfeld did discuss race and gender in many episodes, without actually including actors of color in substantive roles. Aside from lacking diversity, there are many examples that show the four main characters' reactionary attitude toward women and minorities. Here are 10 episodes that might not hold up today.

This episode should be called “The Stalk-Out.” Jerry accompanies Elaine to a dinner party and meets an attractive woman he hits it off with, but does not want to get her phone number in front of Elaine, with whom he has recently ended a relationship. After finding out where the mystery woman works, Jerry shows up at her office to “stake her out” and pretend to accidentally run into her using the ruse that George works in the building as an architect. He gets a date with her, but his approach is creepy and intrusive. If only Facebook had been invented, Jerry wouldn’t have had to physically stalk a random woman he wanted to sleep with.

In this rare episode that features a person of color, the gang ruins yet another innocent bystander’s life. Babu, a Pakistani immigrant, opens up a generic café across the street from Jerry’s apartment. Feeling it is place to give everyone advice, Jerry tells Babu to bring different cuisine to the neighborhood and make the restaurant Pakistani-themed instead. The restaurant fails, and Babu continually yells, “You are a very bad man” cartoonishly while waving his finger at Jerry. Later on in the series, Jerry accidentally gets Babu deported, and the scene is construed as comedy.

Jerry meets a buxom woman at his gym and feels compelled to find out if she has breast implants. Rather than simply ask, he enlists Elaine to spy on her in the gym, determine whether her breasts are real or fake, and report back to Jerry. I’m not sure what the politically correct way is to ask someone if they have breast implants, but this definitely wasn’t it.

George is caught staring at his boss’ teenage daughter’s cleavage. His defense is that it was in his “field of vision.” The entire gang orchestrates a scenario for Elaine to show cleavage in front of his boss in order to demonstrate that when cleavage is visible, straight men are rendered powerless and cannot help but stare, justifying George’s ogling of a 15-year-old.

This episode stresses white middle-class discomfort over dealing with race. After offending a Native American woman by dragging a cigar store Indian statue and making hooting noises, Jerry somehow finagles a date with her in order to make up for his racist gestures. He continues to make prejudiced remarks in front of her, and inadvertently calls her an “Indian giver.” This episode is a good commentary on white male cluelessness, though the Native American woman is portrayed as being overly sensitive.

Elaine pretends to be a gay man’s girlfriend in order to appease his boss, who is homophobic. After spending an enjoyable evening at the opera with him, she decides to try to “convert” him, and asks if he’s ever considered “changing teams.” While this episode highlights homophobia in the workplace, it is problematic because it reinforces the idea that identifying as gay is a phase that can be rectified with the right heterosexual.

George’s phone lines are crossed with a woman Jerry believes to be Chinese. When Jerry tells Elaine he likes Asian women, she says, “Isn’t that a little racist?” to which he replies, “It’s not racist if I like them.” The woman turns out to be a white woman with the last name Chang, disappointing Jerry, who continues to see her because “she is still a woman, after all.” In this episode Seinfeld fetishizes Asian women without having any Asian women actually in the show.

After George’s black boss is offended when he tells him he looks like Sugar Ray Leonard, George goes out of his way to prove he is not racist by trying to find a black man to pretend to be his friend. He stops random black people on the street and asks them to play his friend, finally getting an exterminator to come with him to dinner to meet his boss. Aside from being a super awkward episode, it insinuates that you can’t be racist if you can prove you have one black friend.

The gang can’t figure out if Elaine’s new boyfriend is part black. Determined to figure out his ethnicity, Elaine asks several inadvertent questions about his heritage. After hearing hip-hop music blaring from his apartment and noticing his collection of African masks, Elaine is confident of his blackness. She even calls the black waitress “sister” and says, “It’s okay, my boyfriend is black,” at which point he arrives and tells her he is in fact white and assumed she was Hispanic because her last name is Benes. She says she is not, and they conclude, “So we’re just a couple of white people?” Seinfeld deals with the issue of interracial dating without having any of the characters date an actual person of color.

This episode was considered so offensive it was pulled from rerun circulation and NBC was forced to formally apologize. It was criticized for the scene in which Kramer stomps on a burning Puerto Rican flag, causing a riot. After being chased by an angry mob, Kramer shouts, “It’s like this every day in Puerto Rico!” Manuel Mirabal, the president of the National Puerto Rican Coalition, called the episode an “unconscionable insult” to Puerto Ricans.