As we see nearly every day, our criminal justice system is part of the noxious heritage of white supremacy 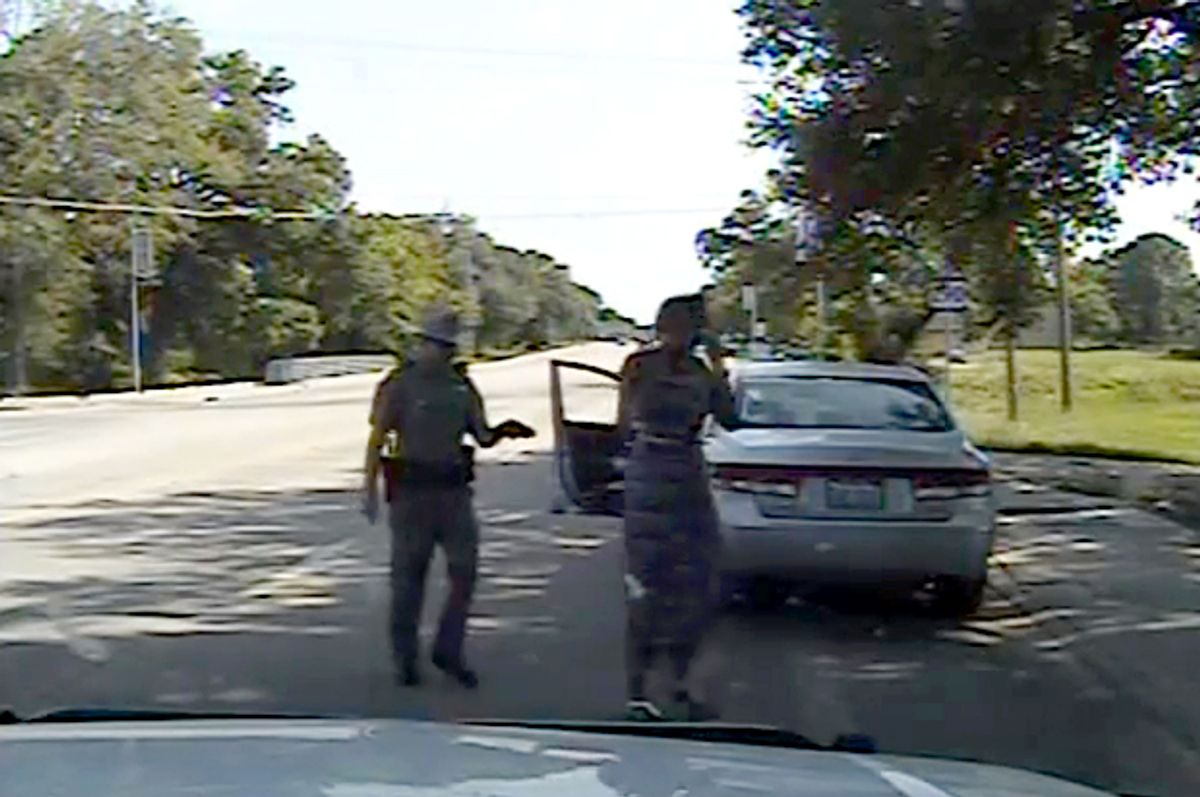 Sandra Bland, a 28-year-old African-American civil rights advocate and graduate of Texas’s Prairie View A&M University, has been dead for more than a week. She was traveling to her old school from Illinois after accepting a job as a student ambassador to the alumni association. On her way, she was pulled over for a routine traffic stop; the officer’s dash-cam, which appears to have been edited, shows him to be a bully from the start. He escalates at every opportunity. He menaces her with a taser before he appears to rough her up.

Three days later, her body was found in a jail cell. Her family does not know why.

Lorenzo Davis, on the other hand, is a 23-year-veteran of the Chicago Police Department, now retired. He was hired in 2008 by Chicago’s Independent Police Review Authority, a purportedly autonomous oversight body tasked with investigating all “officer-involved” civilian shootings. Out of 400 cases since 2007, the IPRA has ruled 399 times in the cops’ favor. But in six cases over the past year, Davis says, he reached the opposite conclusion. He says he was pressured to change his mind.

Earlier this month, he was fired. He thinks he knows why.

Let’s stipulate that we still don’t know what happened to Sandra Bland. According to authorities at Waller County Jail, the place where she was brought and where she died, Bland took her own life. They claim they found her body in her cell, and security camera footage of a hall — which shows neither her cell room nor her cell door — shows no one coming or going for roughly 90 minutes. The Harris County Institute of Forensic Sciences did an autopsy and agrees, but Bland’s family say she had too much going for her to kill herself. They say it’s “unfathomable.”

Regardless of how the reportedly “outspoken, happy and passionate” Bland died, her simply being jailed is evidence of one of the double-binds of white supremacy. The phenomenon of structural racism — the racism that results from systems, rather than individuals — is devastatingly real, but every human system is comprised of individual human beings. In the aggregate, they look like impersonal forces. But for Lorenzo Davis, the people shot in those six “officer-involved” cases, and those who knew and loved Sandra Bland, these moments are unbearably personal.

According to Waller County District Attorney Elton Mathis, Bland’s death is being treated as if it were a homicide, and the results of an investigation will ultimately be presented to a grand jury. But here, too, we see how a lack of trust in individuals can coalesce into doubting the legitimacy of the overall system. Mathis promises to ensure the investigation leaves “no stone … left unturned.” But before anyone had seen video for themselves, he was already calling Bland “very combative” and “not a model person.” And the involvement of a grand jury hardly reassures anyone who remembers the name Michael Brown.

These are not the only reasons outsiders are skeptical of the Waller County criminal justice system’s integrity. The county has a long, ugly history of racism: a former judge once described it as “the most racist county in the state.” Cops in Waller are said to have a reputation for harassing African-Americans; and the current county head sheriff, R. Glenn Smith, was fired from his previous gig after accusations of racism led to his being suspended for two weeks. And although the FBI is reportedly keeping its eye on the situation in Waller, the federal government’s ability to enforce civil rights law is more limited than many of us think.

Lorenzo Davis cannot rely on institutions ostensibly designed to ensure accountability, either. His former employer, the Independent Police Review Authority, was first created because an earlier oversight agency was seen as beholden to police. Yet when Davis found six cases of a Chicago cop firing their weapon unjustifiably, he was told by his superiors that he evinced “a clear bias against the police.” Before he ruled against cops, Davis says, his bosses had no issues with his work. But he claims that the individuals within the IPRA have “a hidden agenda” that holds “virtually all police shootings” as “justified.” He was fired, he says, because he disagreed.

The stories of Sandra Bland and Lorenzo Davis are notable, but they’re hardly unique. The belief that the justice system cannot be trusted to uphold its own prerogatives extends from coast to coast. It’s the reason why so many cities have to fight tooth and nail to establish real civilian oversight over their police; and it’s the reason why politicians like New York Gov. Andrew Cuomo hope that if they empower special prosecutors and independent watchdogs, they will restore the public’s faith. But as New York City Mayor Bill de Blasio’s experience shows, one person, no matter how well-intentioned, can only do so much.

The are limits, in other words, to the power of an investigator, a mayor or a governor. But the same can’t be said of police. As a character in “The Wire” put it, “the one true dictatorship in America” is “a patrolling officer on his beat.” They can do almost whatever they want. Their only real restriction isn’t the law; it’s what they believe society at large will accept. When it comes to the lives of black people, the cop who arrested Bland and the bureaucrats who fired Lorenzo showed us what they think they can get away with. They showed us why you’re 21 times more likely to be shot if you’re a young black man than if you are white.

We shouldn’t need to ask why Bland and Lorenzo had to suffer as they did, because the answer is all around us. They system is not broken; the system is working. It is the edifice handed down to us by generations of white supremacy, and maintained by countless individuals’ decisions. The devaluation of African-American life is not a glitch, but rather the intent.