Jeb Bush slurs war hero John Kerry: Will the GOP call him out like Donald Trump?

Bush still backs GOPers who slurred John Kerry’s military service. How does that differ from Trump's hit on McCain? 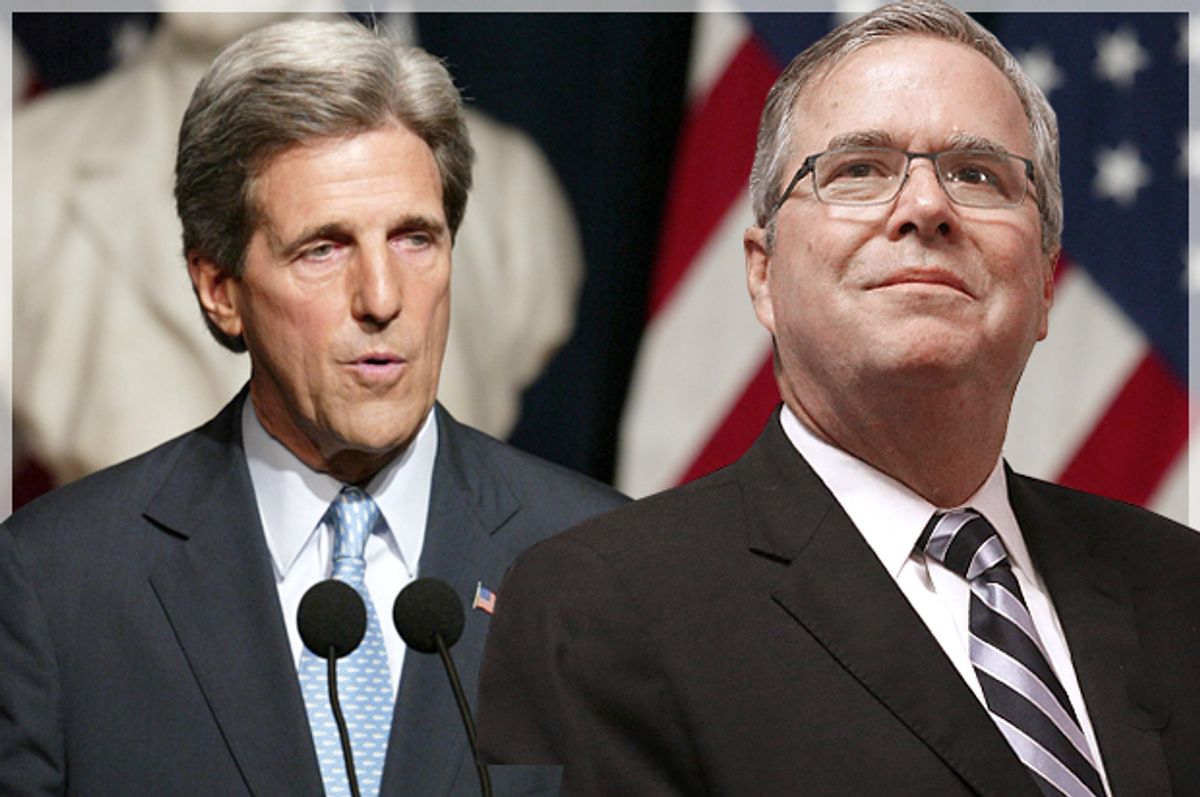 Jeb Bush was quick to denounce Donald Trump after the reality show host-turned-presidential candidate made his ugly claim that Sen. John McCain was "not a war hero" last weekend. "Enough with the slanderous attacks. @SenJohnMcCain and all our veterans - particularly POWs have earned our respect and admiration," he tweeted Saturday.

But journalists quickly saw a problem for Bush: he had signed on to a similar attack on a decorated war hero: 2004 Democratic Presidential nominee John Kerry, when he was running against Jeb's brother George. Unbelievably, Bush reiterated his support for those ugly attacks on Kerry Tuesday afternoon in South Carolina.

To recap: Bush backed the Swift Boat Veterans for Truth’s shameful attacks on Kerry, writing a letter to the group’s founder, Col. Bud Day, thanking him and the “other Swifties” for their “support of my brother in his re-election.” It went on: “I simply cannot express in words how much I value their willingness to stand up against John Kerry.” That “willingness,” of course, involved claiming Kerry lied about the military service that won him the Purple Heart.

You might think Bush would feel a twinge of self- consciousness, in the wake of the loud, strong, nationwide bipartisan condemnation of Trump. But you’d be wrong. Bush repeated his support of the Swift Vote Vets when asked about it in Spartanburg Tuesday afternoon.

“[Day] won every award possible," Bush said.  "He served in three wars, and if he says that there was a problem [with Kerry’s service], I believe him. He's a great Floridian and a great American and so I wrote him a note thanking him for his service. Not gonna change my beliefs about that at all. "

Not gonna. At all.

Since John McCain has become the standard of decency when it comes to talking about military veterans, let’s contrast how he handled the same issue – back in 2004, and also this week. McCain vigorously denounced the ads attacking Kerry sponsored by the Swift Boat vets at the time, even though Bud Day was a close friend -- a ranking officer in his unit who was also McCain’s cellmate at the Hanoi prison.

“I think the ad is dishonest and dishonorable. I wish they hadn’t done it,” McCain told the Associated Press at the time. “I don’t know if they knew all the facts.” He noted that “it was the same kind of deal that was pulled on me,” comparing the attacks on Kerry to the Bush campaign’s attacks on him in the bitter Republican primary of 2000.  Though he was chair of Bush’s 2004 campaign in Arizona, he urged the Bush White House to condemn the ads. But the Bush White House declined.

McCain reiterated his criticism of the Swift Boating of Kerry on Monday morning. “I did strongly condemn those ads,” he told MSNBC’s Joe Scarborough. “John Kerry and I have had differences over the years, though we have worked together on some issues like normalization of relations with Vietnam…To denigrate in any way [that] service is offensive to most of our veterans.”

So John McCain still criticizes his friend and former commander Bud Day for his Swift Boat venture, while Jeb Bush, who barely knew him, still defends it.

I have to ask the question: How does this make Bush different from Donald Trump? He once publicly claimed, and he still publicly claims, that a decorated war hero was not a war hero. So did Trump. Bush still alleges, with no evidence, that “there was a problem” with Kerry’s service, a claim John McCain rejects.

Will any Republican denounce Bush? Or is it OK to slander war heroes if they are Democrats? I hope McCain takes the opportunity to note the way another Bush campaign continues to play dirty and denigrate veterans. We’ll see.