Black women are constantly told they're too angry, while the deck is stacked in favor of the Taylor Swifts 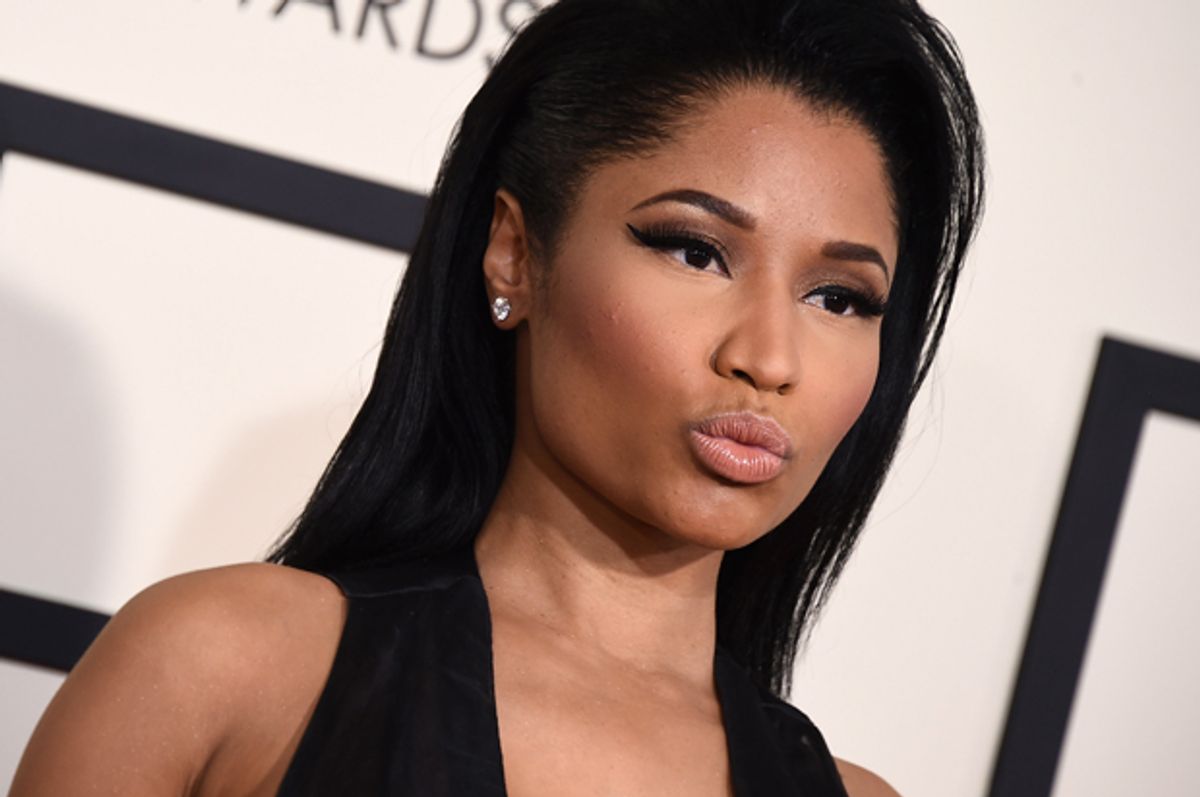 Last year’s “Beyond the Lights” was an incredible movie that, like many incredible movies without massive marketing budgets (especially those with predominantly black characters), went overlooked in those end-of-year roundups featuring the best movies of 2014. Gina Prince Bythewood’s complex tale of love and growth firmly centers her protagonist, Noni, in a music industry built on sexism, racism and other troubling isms. Young Noni’s first introduction into this world comes at the beginning of the film, when she participates in a children’s talent show, and sings an astoundingly mature rendition of Nina Simone’s “Blackbird.” It's no surprise, but it's all the more painful when Noni loses to the blond-haired, subpar, tap-dancing white girl. Without aligning the "Anaconda" video with a Nina Simone rendition, it’s safe to say that this scene comes to mind today, as the MTV VMAs come under attack from practically all sides.

Nicki Minaj fans are shaking their heads over the "Anaconda" snub (and/or asking Taylor Swift to think about privilege and other such things before she tweets at Nicki ever again). Rock fans are trying to figure out how Arctic Monkeys got nominated for a video they released in 2013. And some Kendrick Lamar fans are noting that his “Alright,” video—a powerful takedown of America’s murderous police—was nominated for Video of the Year, but not for Video with a Social Message (a suspicious snub when a song like Rihanna’s far more patriotic “American Oxygen” was nominated, suggesting that MTV only approves of a very particular “social message”). The VMA nominations failed on multiple fronts, it just so happens that one vocal female rapper isn't prepared to let MTV slide.

Contrarily, one guy doesn’t seem to care about the awards at all, perhaps because he was too busy breaking what is possibly one of the biggest hip-hop stories of the year. Beloved Philadelphia rapper Meek Mill took to Twitter to declare that beloved Canadian rapper Drake is a phony, who doesn’t write his own song lyrics. But Meek took a breather from his Drake attack long enough to share thoughts on his girlfriend Nicki Minaj’s reaction to the VMA nominations. In doing so, he brilliantly summed up the reason many of us no longer take these awards seriously, but also inadvertently highlighted the ways in which such reactions lead to other issues in black culture:

The longer version of the tweet reads, “I don't really trip about the awards... I know they gone give em to the white kids doing it.... That's why we buy Rollie's and shit our own trophies!”

Now if you want to attack Meek for refusing to use proper punctuation here, you’re missing the point entirely, because there’s levels to this shit. In this tweet, Meek is reminding us—and his girlfriend, no doubt—that the awards are, for the most part, not for the black artists. Of course, black artists will be nominated and celebrated by MTV, and of course Nicki Minaj was nominated in other categories for this year’s VMAs. But the very specific inclusion of certain videos in some categories and not others highlights Meek’s perfectly succinct and accurate statement. At the end of the day, when we’re talking about the major awards and accolades (and this is largely true for the VMAs, Grammys, Emmys, Oscars, and every other award show under the sun, which is why the BET Awards and NAACP Image Awards were created to begin with), “they gone give em to the white kids doing it.” Whether the white kids are acting, singing, rapping, directing, writing, showrunning, or producing—they’re gonna be the ones on stage, and the majority of black artists will often have to wait for a special invite from the Taylor Swifts of the world.

Meek Mill implies that, unlike Nicki Minaj and the rest of us who have publicly and/or vehemently acknowledged our disappointment, he remains unbothered. He has his rollies, his chains, his Maybachs, his Maseratis—his toys and his “own trophies” with which to reward—or pacify—himself. Without necessarily meaning to do so, Meek brilliantly draws a direct line from racial discrimination (or racial exclusion) to the significance of bling in black culture. Azealia Banks proudly labeled herself “broke with expensive taste” and Kanye West echoed a similar plight years ago when he admitted on one of his greatest tracks, “I went to Jacob with twenty-five thou/Before I had a house and I’d do it again.” It’s called being “hood rich,” and it’s a concept perhaps best explained by the Big Tymers on their 2002 hit “Still Fly.” More recently, the ESPN documentary “30 for 30: Broke” took a powerful look at how hyper-masculinity, impoverished upbringings and fame effect the outrageous spending habits of athletes. But systematic racism needs to be a part of that discussion as well. MTV, yes even MTV, is as much a part of a system of racial exclusion as any other institution.

So Meek Mill’s message might pose bigger questions to those of us who can’t fathom purchasing a Swarovski-encrusted Jesus piece: How much would you spend to pacify yourself in a system that feels unbeatable? How many trophies do you buy for yourself, in a system that doles them out with great prejudice? On a more positive note, his tweet also suggests that a little self-celebration and self-congratulating isn’t a bad idea. If you can’t beat ‘em, do it Walt Whitman style and sing of yourself.

And although Meek’s outing of Drake might seem unrelated to these issues of class and a black culture of extravagant spending, it’s important to note that Drake is a rapper who grew up in a well-to-do household, was raised by a Jewish mother and got his fame on one of my guiltiest of guilty pleasures, the very white (but still excellent) Canadian series “Degrassi.” As a result, Drake might also be labeled “one of the white kids doing it,” which is why it’s even more problematic to consider the fact that he might not even be “doing it,” as in, writing his own rhymes. For Drake, using a ghostwriter might be interpreted as being less like laziness or general wackness as a rapper, but something more akin to cultural appropriation—an accusation that has also been rightly thrown at Taylor Swift for her “Shake it Off” video. (Amandla Sternberg explained it best.)

On the one hand, it’s great that Meek can, with brevity, make some of these observations, put a hugely famous rapper on blast and then continue on with his day, casually and happily tweeting, seeming to think much less of it all than we do. If, indeed, he doesn’t care about the VMAs, that’s probably good for him. Nicki Minaj, for publicly daring to care and asking questions about the nominations, has been dragged through the media today: “Big, scary [black] Nicki gets into a Twitter beef with sweet, cat-loving [white] Taylor Swift” some of the headlines seemed to read.

Dare I suggest that Nicki Minaj is, essentially, attempting to sing “Blackbird” at a talent show looking for tap-dancing white girls? Again, as someone who wasn’t fully convinced of the feminist message behind “Anaconda” (and as someone who can’t help but cringe at that “I let him hit it cause he slang cocaine” line), I can’t fully make that alignment. There’s also this great Shirley Manson Facebook post to consider, in which she makes a strong point about how these awards miss the mark every time, for all artists, mostly because they were inherently designed to make money. But it’s the public response, perhaps more than Nicki Minaj’s original tweets, that points to the bigger issues. What’s interesting about that “Beyond the Lights” scene is how Noni’s white mother (played by Minnie Driver) demands that her daughter throw away the trophy she received, since it wasn’t the top prize. What happens when a grown, black woman, makes a similar point about her talent, as it stands alongside the talent of her white counterparts? What happens when she asks why her boldness was overlooked for something cuter and, perhaps, safer?

Well, this happens: “Don’t play the race or skinny cards, Ms Minaj - you’re just a stroppy little piece of work whose video wasn’t as good as Taylor Swift’s.” That is an actual headline (written by the same guy who insisted that he's not racist, but also doesn't understand the significance of #BlackLivesMatter, good ol’ Piers Morgan), and while it’s dramatic, it’s one of many voices in a sea of news and entertainment pieces declaring Nicki Minaj a sore loser. The language in all of these articles is incredibly significant, and brings to mind much of the discourse surrounding Serena Williams. She, like Nicki Minaj, was accused of being too aggressive, too angry and competitive (in a competitive sport, no less). When we might have all been talking about her unparalleled achievements in tennis, we were distracted with complaints about her bad attitude (not to mention her hairstyles and body shape).

But perhaps all of this should be shrugged off as well. After all, the angry black woman stereotype can’t possibly have any lasting, terrifying, or deadly effects. No one ever attacked a 14-year-old girl at a pool party because of a stereotype about black girls and their “attitudes,” right? And no one ever dragged a black woman out of a car—a woman who is now mysteriously dead—for being verbally “combative?” If the angry black woman is just a trope, perhaps we can all do like Meek Mill, shrug off the VMA snub and go buy ourselves our own trophies—a Maserati, a Jesus piece, a fancy new journal for all my fellow writers out there looking to blow a freelance check.

Of course, it’s clear that we’re not always free to look the other way and buy our own trophies. As Brittany Packet aptly pointed out on Twitter, there is a direct correlation between the headlines used to describe Nicki Minaj and the police officer’s horrifying, unlawful reaction to the late Sandra Bland, for refusing to put out her [lawful] cigarette.

Meek Mill is, as he unapologetically puts it, from the trap. That is to say, he hails from a North Philly location directly opposite of any point of American privilege. But today, he does operate from a certain space of privilege, as does Trinidad-born Nicki Minaj. Although it may be a better act of self-preservation to ignore the award shows continuously showering accolades upon the white kids doing it, it’s important that Nicki Minaj is using her position to trip (or ego trip—something poet Nikki Giovanni would likely approve of). We should all be tripping, if not for the sake of a music video, for the sake of Sandra Bland’s memory—and the memories of other victims of racial exclusion, racism, and stereotype-embracing news headlines—which are more dangerous than many of us care to acknowledge.