Listen to Jon Stewart! What the president learned from the "Daily Show"

Both men, as different as they are, reminds us why we'll miss them 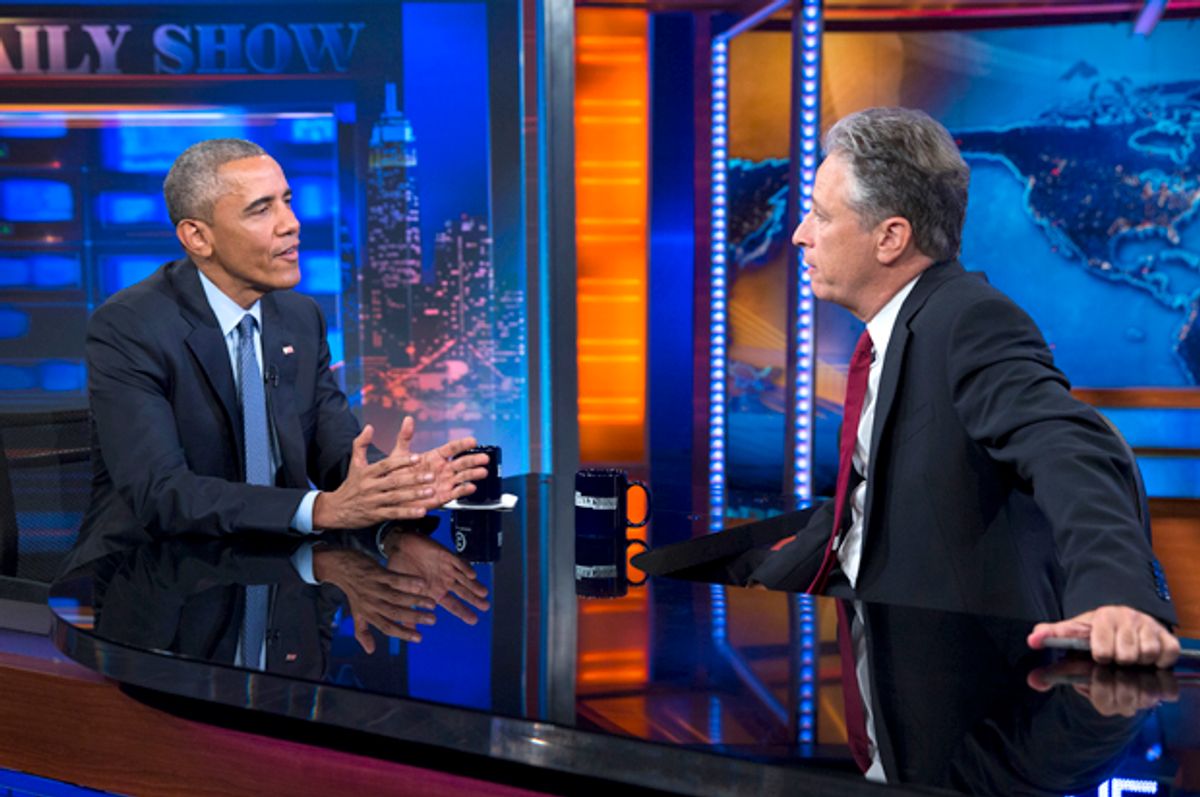 In a lot of ways, they don't have much in common: One is a bitterly ironic journalist famous for refusing to suffer fools, the other a dry, sometimes passionless politician. The former defies orthodox professional standards at times to openly mourn or celebrate events of the day and to take unyielding partisan positions. The latter is famous for his lack of drama, and his cautious -- some would say gutless -- centrism.

But last night, Jon Stewart and President Barack Obama were at their best at what's expected to be their final televised encounter. Stewart steps down from hosting "The Daily Show" next month, and Obama leaves office in a year and a half. We can see last night as a kind of exit interview for both of them. And it also makes us think: What if Obama had been this guy throughout most of his term?

A presidency is in a way a kind of conversation, more than a signing of laws or series of policy positions. And this was a vastly better conversation that we've had over the last seven years. Running a country, of course, is bigger and more complex than appearing on a friendly talk show. But Obama reconciled his idealism and his pragmatism in a way we've seen too infrequently during his presidency. Why last night, and not earlier?

The two certainly share this: They would not have been where they are without the horrors of the George W. Bush administration, especially the swaggering military adventurism from a macho president and cast of chicken-hawk advisors whose own military service was slender to nonexistent. A country as racially divided and gerrymandered as this one would never have elected a black president -- many Americans still can't believe we did it. And it's hard to imagine a show as uncompromisingly liberal as "The Daily Show" becoming the mainstream force it did in a landscape dominated by centrist or apolitical post-Letterman hosts without the catastrophe of the Iraq War. That is, both men owe their status to a kind of fluke.

And both men took two different -- but perfectly reasonable -- responses to the horrors of the George W. Bush years. Stewart's is the eye-rolling, sarcastic, can-you-believe-this-crap point of view, Obama's the let's-pull-together-to-heal approach. Both seemed liked good ideas at the time.

But Tuesday night, the differences were not vast, and allowed for just enough disagreement to make good television and, simultaneously, an intelligent political discussion.

Some of it was just kidding around. "I can't believe you're leaving before me!" Obama explained, before joking about an executive order too keep Stewart on the show. Stewart volleyed back that he sees it as a state's right issue, and suggested Obama has "senioritis."

"You don't have that much time," Stewart offered, "to take Americans's guns, declare martial law, and put hard-working Americans in FEMA camps."

There was some taking stock of achievements -- the president mentioned 16 million Americans with health insurance who would not have it without the Affordable Care Act -- and a fairly dry discussion of Middle Eastern politics, especially the nuclear deal with Iran. (When Obama began talking about "the Middle East in general," Stewart announced that it was time for a commercial break.) Stewart teased Obama about Iran as "a good partner for peace," and asked, "Who's team are we on in the Middle East?"

The president spoke about the fragmenting of the media, the loss of a common conversation -- and with it a sense of shared purpose -- and how the White House had been slow to adapt to this technology-driven transformation.

But besides a joke about the incoming President Trump, the subject that didn't come up -- and which defines the difference between both men -- was the opposition to the president's agenda by the far right. Every president sees opposition from the other party, but the Obama administration has been virtually defined by the birthers, the various Tea Party networks, Fox News, rant radio, and the rest. Stewart mocked them; Obama tried to persuade them, and saw the nation as a sprawling family -- neither red nor blue -- he could bring together. He's made plenty of mistakes and bad calls as president, and this was one of them.

Democracies need multiple parties or points of view, and Obama could not govern simply by playing to Stewart's audience. But it makes you wonder: What if he had just dismissed the right-wing crazies -- as William F. Buckley and President Eisenhower did before him --and governed unapologetically from the beginning? Ignoring bigots and extremists is not the same as preaching to the choir.

President Clinton spent his last years defending himself. The good news is that it looks like Obama won't have to. He's not gone yet, and here's hoping we see more of the lucid, confident, persuasive figure we saw last night.