Obama on "The Daily Show": A History

Looking back at a decade of Obama's appearances with Jon Stewart, 2005-2015 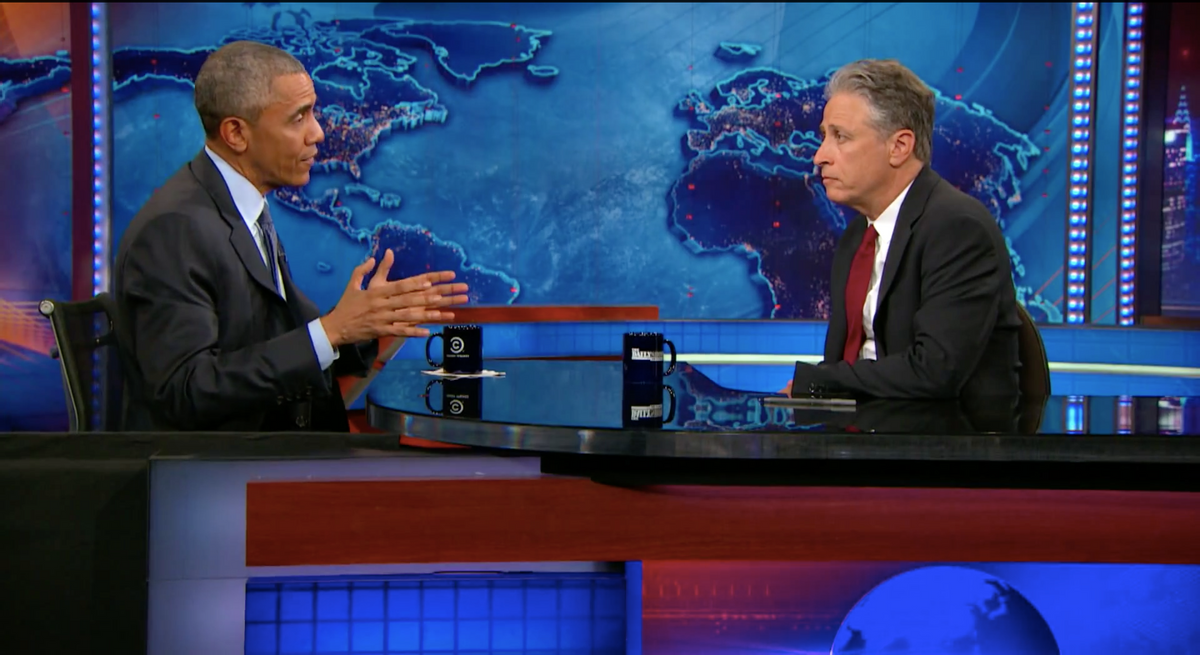 Last night, President Barack Obama appeared on The Daily Show with Jon Stewart for the last time. With both Obama and Stewart approaching the ends of their momentous tenures, there was a mite of nostalgia in the air, with the pair ribbing each other warmly and Obama joking that he is "issuing a new executive order that Jon Stewart cannot leave the show.”

Here’s a brief look at POTUS' many other visits on the show, from his days as a rising Illinois senator back in 2005 through his historic campaign and tumultuous presidency.

In his first appearance, the Illinois senator addressed the hype that was increasingly beginning to surround him while also displaying that he could tangle with Stewart in the witty barb department. "It is true that I worry about the hype," Obama said, when Stewart asked him if he was starting to feel pressure. "The only person more overhyped than me is you.”

POTUS got a very warm welcome when he appeared on the show as a presidential candidate for the first time, with fans yelling “You rock, Barack!”

In his second campaign appearance, the tone remained light, with Stewart asking Obama to infuse some "hope" into phrases like "I'm calling to ask if you're happy with your cell phone service.”

When Obama appeared on videocam from the campaign trail, a mere week before election day, Stewart joked about the racial divide in the voting block, saying "Obviously your mother is from Kansas, she's a white woman, your father's African. Are you concerned that you may go into the voting booth and your white half will all of sudden decide 'I can't do this!’” A smiley Obama responded: "It's a problem. I’ve been going through therapy to make sure I vote properly."

18 months into Obama’s presidency, just prior to the devastating midterms, Stewart taped an episode of The Daily Show in Washington. To Stewart’s credit, the host kept the POTUS on his toes, criticizing his presidency by saying "legislatively it has felt timid at times.” Obama responded to the barb, saying, "Jon, I love your show, but this is something where I have a profound disagreement with you. This notion that health care was timid — you’ve got 30 million people who are gonna get healthcare because of this.”

On another occasion, Obama defended Larry Summers as having done "a heckuva job,” and Stewart snapped back: “You don’t want to use that phrase, dude” (Bush had previously praised FEMA director Michael Brown in the same words after Katrina).

Midway through Obama’s run for reelection, Stewart remained tough on POTUS, grilling him on Benghazi and ribbing him about his debate flub against Romney. Former press secretary Jay Carney later called the interview "probably the most substantive, challenging interview Barack Obama had in the election year.”

Last night, in addition to Obama's joking executive order that Stewart stay on the show, the pair also engaged broadly with a number of current issues ranging from the Iran nuclear deal to global warming, with Obama opining about the importance of a “common purpose” in politics and the importance of widespread political engagement, and Stewart responding "“I guess what you would say is after seven years, is that the advice that you then bequeath to future President Trump?”