Donald Trump is not corrupting the conservative movement; he's benefiting from the movement's existing corruption 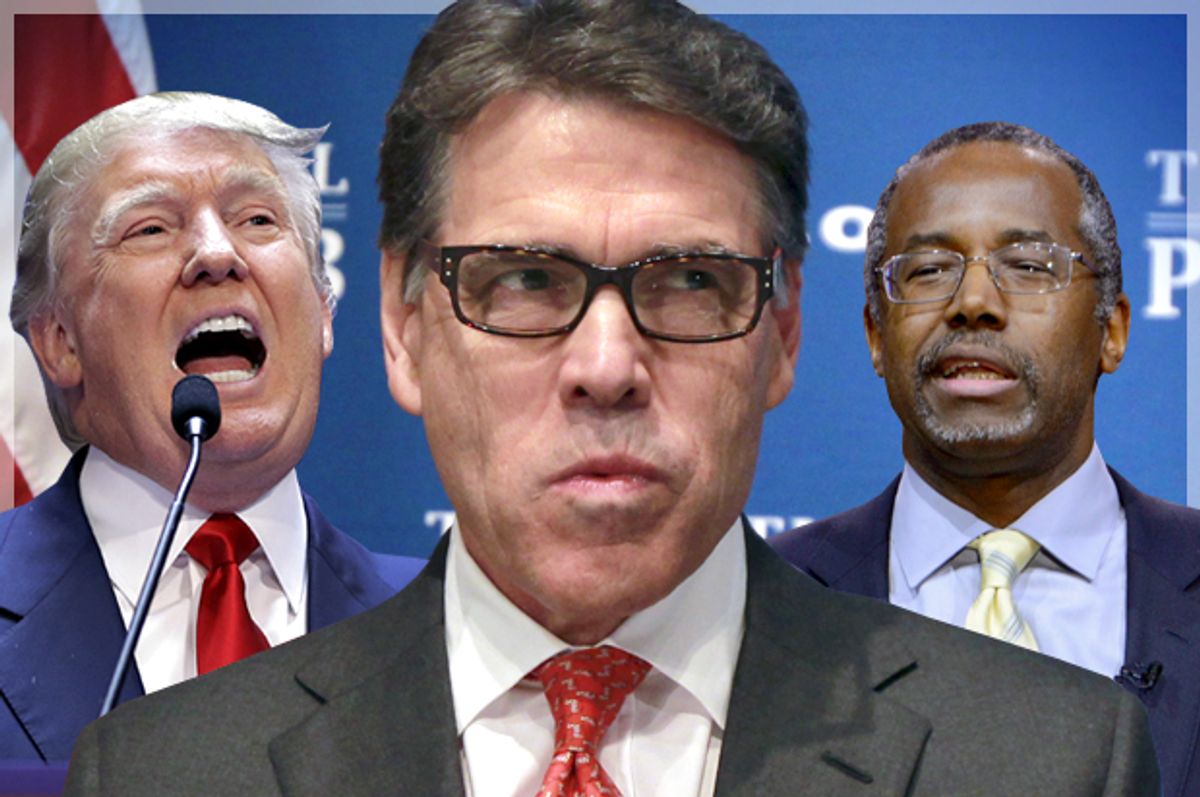 Donald Trump’s ascendance in the 2016 Republican polls has proved to be something of a boon for lower tier candidates looking to bask in the corona of Trump’s enormous media spotlight. Among those candidates, no one has done more to position himself as the anti-Trump than former Texas governor Rick Perry. Eagerly responding to Trump’s unending stream of insults and provocations, Perry’s been throwing out denunciation after denunciation, arguing that Trump is unfit to serve as president. His campaign has been trolling The Donald on Twitter, retweeting the racist billionaire skidmark’s past praise of Perry. Now he’s taken to referring to Trump as a “cancer” on conservatism.

According to the Texas Tribune:

Perry is expected to keep up the drumbeat of Trump criticism with a speech Wednesday in Washington, D.C. In his remarks, Perry plans to cast Trump as a destructive force within the GOP, ultimately threatening its chances at winning back the White House in 2016.

"He offers a barking carnival act that can be best described as Trumpism: a toxic mix of demagoguery, mean-spiritedness and nonsense that will lead the Republican Party to perdition if pursued," Perry will say, according to excerpts. "Let no one be mistaken: Donald Trump’s candidacy is a cancer on conservatism, and it must be clearly diagnosed, excised and discarded."

Trump’s rise in the polls is attributable in some part to his celebrity and his knack for drawing media attention, but it’s also true that the outlandish nonsense he says about immigrant rapists and building a giant wall on the southern border resonates with a significant portion of the Republican electorate. This is not some unpredictable accident. The official policy of the Republican Party is to be overtly hostile to undocumented immigrants and to treat them with as much disdain as can be mustered. They do this because even the slightest hint of non-hostility to immigrants will open up Republican officeholders to charges that they’re pro-“amnesty,” and that’s when the primary challengers start filing their paperwork. Rick Perry understands this better than most Republicans: during his 2011 presidential run he was raked over the coals by conservatives after he chastised Republicans as heartless for opposing in-state tuitions for undocumented immigrant students.

There’s also the recurring phenomenon of Republican base voters flocking to candidates embody the “toxic mix of demagoguery, mean-spiritedness and nonsense” that Perry laments. In the minds of voters and activists, candidates who freely and forcefully say crazy shit are merely “saying what needs to be said.” This veneration of the willingness to be “un-PC” is a natural reaction to the many years of griping from conservative media and Republican officeholders that liberals and the mainstream press are trying to police their speech. Before Trump joined the 2016 fray, Ben Carson was the chief beneficiary of this phenomenon, drawing rave reviews from the activist right as he compared America under Barack Obama to Hitler’s Germany.

And so while Rick Perry makes the argument that Trump is a tumor within his party, conservatives on TV and (more importantly) talk radio are making the case that Trump captures the conservative spirit better than the other candidates in the race.

Laura Ingraham made the case for Mr. Trump during her radio show on Tuesday, calling on Republicans to do some soul searching about why he was resonating with voters and outpacing established politicians in the polls despite his McCain comments.

“How is it that the field is so susceptible to being, at least for the moment, Trumped?” Ms. Ingraham asked, lamenting that Republicans were doing themselves a disservice by ganging up on Mr. Trump.

Callers like Dave from Indiana were unfazed by the dust-up with Mr. McCain, seeing it as more proof that Mr. Trump is ready to battle for his beliefs and ideas. “The simple fact of the matter is that he fights,” he said. “That’s why he’s worth supporting.”

So by all means denounce Trump – if anyone deserves it, it’s him. But it’s not accurate to portray Trump as a malignant force corrupting the Republican Party and the conservative movement. He’s simply taking advantage of a corruption that has existed for some time.