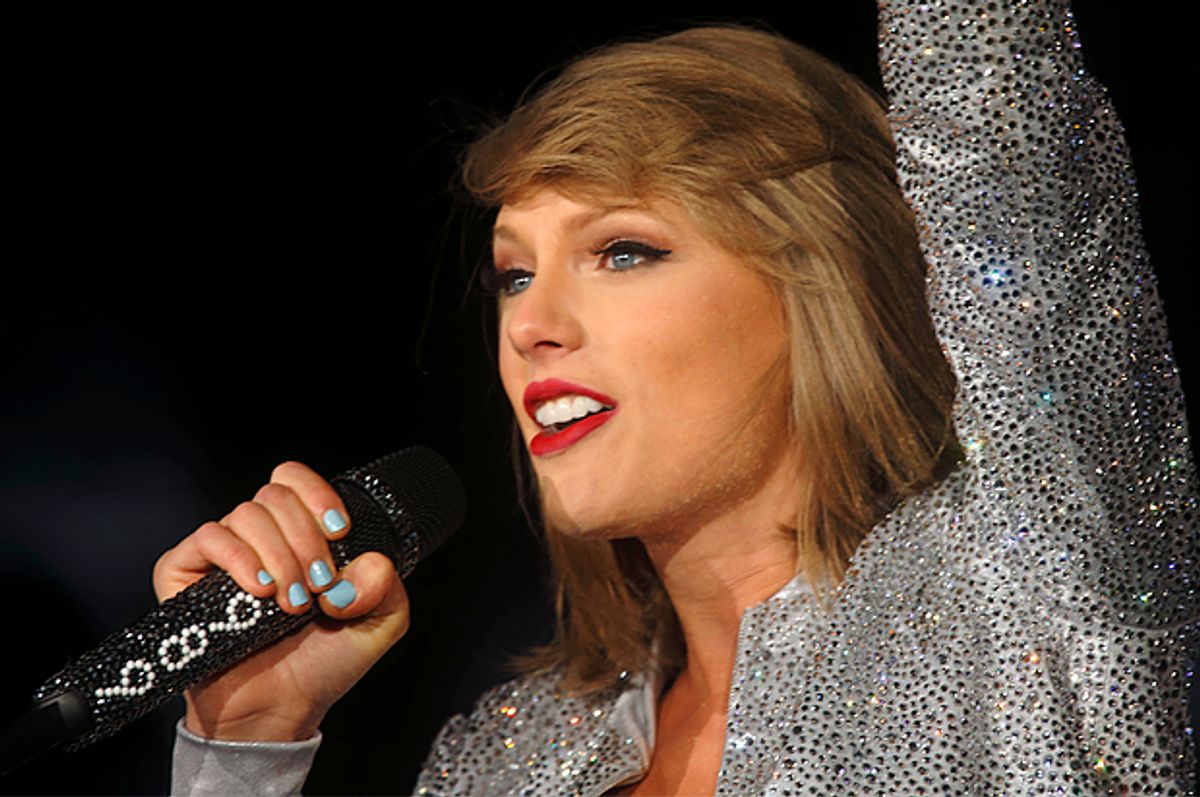 Yesterday, Nicki Minaj criticized the VMAs for failing to recognize her groundbreaking booty-twerking anthem "Anaconda" for video of the year, pointing to the industry's habit of silencing the achievements of women of color. “When the ‘other’ girls drop a video that breaks records and impacts culture they get that nomination,” she tweeted. “If your video celebrates women with very slim bodies, you will be nominated for vid of the year.”

Taylor Swift -- who wracked up a video of the year nomination for her cameo-filled revenge anthem "Bad Blood" -- took Nicki's remarks as a personal jab, responding, "It's unlike you to pit women against each other. Maybe one of the men took your slot." An awkward back-and-forth ensued, with Nicki pointing out that she wasn't referring to Swift at all but imploring her to "speak on this" (Vulture has a more in-depth account of the scuffle).

Cultural critics were quick to point out the tone-deafness of Swift's response, which shut down Minaj's legitimate frustrations over racial bias and cloaked her dismissal in the guise of feminism (you can read a great takedown from Salon's  own Erin Keane here). Swift should have known better than to have get involved, but then again, we should also know better than to look to Taylor Swift as a progressive icon. While Swift has re-positioned herself as a legitimate feminist role model in the past year, her record on progressive issues has historically been muddled at best, downright embarrassing at worst. Here are five examples:

In 2008, Swift released a song called "Picture to Burn," which included the line, “Go and tell your friends that I'm obsessive and crazy, that's fine, I’l tell mine you’re gay.” Swift later changed the offending bit to “you won’t mind if I say.” To be fair, Swift has made a lot of headway on progressive issues in recent years, with her recent track “Welcome to New York” showing an evolved stance on LGBT issues in her lyrics: “and you can want who you want, boys and boys and girls and girls."

Swift has embraced feminism/female solidarity/the 24-inch waists of many a Victoria’s Secret model in recent years, but she wasn’t always an outspoken feminist. Asked by the Daily Beast back in 2012 whether she considers herself a feminist, Swift responded "I don't really think about things as guys versus girls. I never have. I was raised by parents who brought me up to think if you work as hard as guys, you can go far in life.”

Once again, you have to give her credit for evolving; in a recent Maxim interview, she explained how her stance has changed, saying:

"Honestly, I didn’t have an accurate definition of feminism when I was younger. I didn’t quite see all the ways that feminism is vital to growing up in the world we live in. I think that when I used to say, “Oh, feminism’s not really on my radar,” it was because when I was just seen as a kid, I wasn’t as threatening. I didn’t see myself being held back until I was a woman. Or the double standards in headlines, the double standards in the way stories are told, the double standards in the way things are perceived. A man writing about his feelings from a vulnerable place is brave; a woman writing about her feelings from a vulnerable place is oversharing or whining. Misogyny is ingrained in people from the time they are born. So to me, feminism is probably the most important movement that you could embrace, because it’s just basically another word for equality."

Still, even post-feminist-turnaround Taylor Swift 2.0 has made some questionable choices, with many deeming her Katy Swift revenge anthem "Bad Blood" and its cameo-filled video to be more of an intimidating show of strength than a display of feminist solidarity. As Puja Patel writes at The Concourse, "The troubling, underlying takeaway from this video is that Swift wants her fans to know that she’s the most important of all the important kids and that she’s become somewhat untouchable as a result. And that’s the worst kind of way to tout your championing of women (and celebrity hashtag-feminism)—to wrap it up in a blanket of cool and use it as a weapon!"

As her public statements on feminism have evolved, so too have her song lyrics, which used to contain a whole kaboodle of retrograde ideas about dating and sexual autonomy. For instance, her song “Fifteen” about her best friend losing her virginity, proclaimed “Abigail gave everything she had to a boy" (really Taylor, everything?). There’s also her regular reliance on the ol’ Madonna/Whore complex, like in “Better Than Revenge,” when she slut-shames the girl who stole her boyfriend by singing "she's an actress, but she's better known for the things that she does on the mattress,” and “You Belong With Me,” where Swift pits herself — the sneaker-wearing, t-shirt wearing good girl -- against her nemesis, who wears high heels and short skirts (the visual juxtaposition, nicely annotated by Autostraddle, really speaks for itself here).

After a segment of Swift’s “Shake it Off” video featured the star crawling between the legs of a bunch of women twerking in short shorts, backlash erupted, with rapper Earl Sweatshirt deeming the video “inherently offensive and ultimately harmful.” The video further fanned the flames of the ongoing debate about white stars appropriating black culture (of which Katy Perry, Iggy Azalea and Miley Cyrus have all been accused), and certainly can’t have been far from Nicki Minaj’s mind when she called out racial double standards in the industry yesterday.

Blithely smiling next to a swastika

After Swift was photographed alongside a guy with a swastika on his shirt back in 2009 (at Katy Perry’s birthday party, no less), Swift’s reps explained "Taylor took pictures with about 100 people that night ... she doesn't know who this guy is and she didn't realize what was on his shirt.” Ugh, so many questions here: Why did Katy Perry invite this swastika-wearing dude to her birthday? How does Taylor Swift not know what a swastika looks like? What is the name of the racially harmonious, anti-semitism-free planet populated by leggy, bellybutton-less blondes and cats with perfectly folded earlobes that Taylor Swift was raised on? And can I go to there?