Don't call it a "feud": If you're on Team Taylor or Team Nicki, you're missing the point 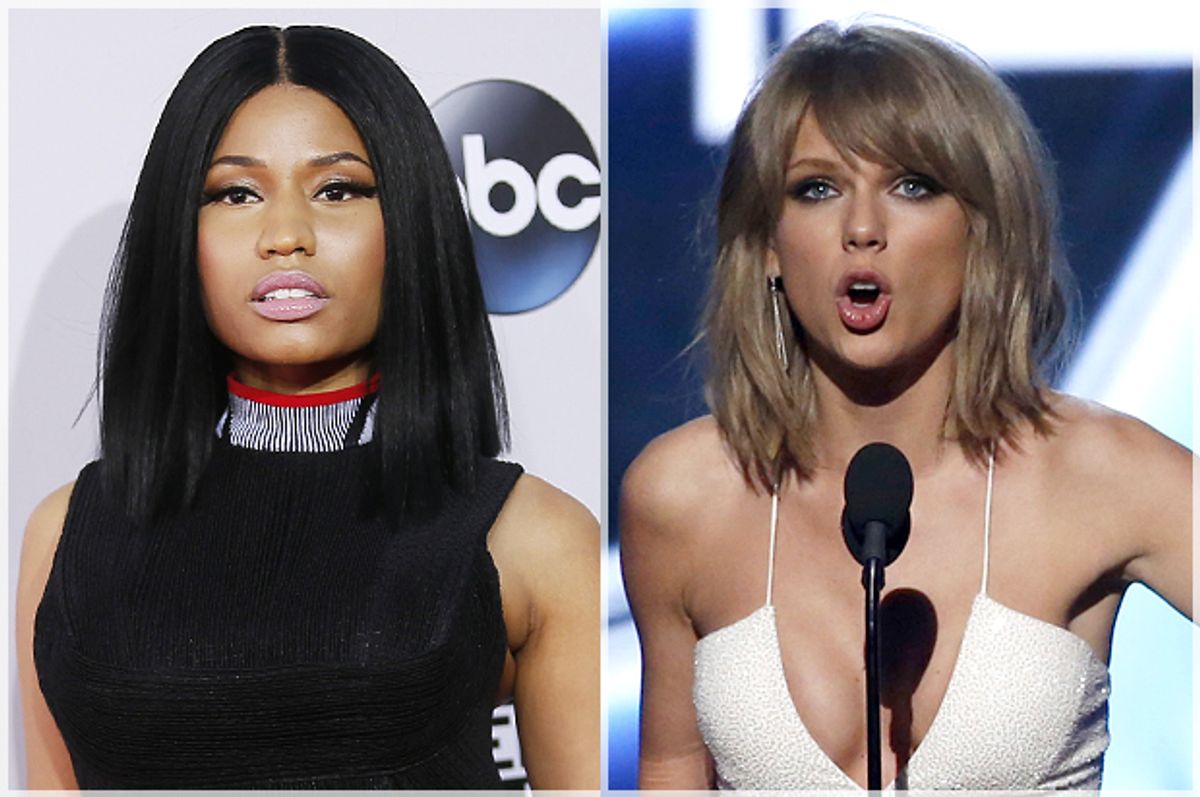 To read some of the headlines and coverage about this week’s Tweets between Nicki Minaj and Taylor Swift about the MTV Video Music Awards, you’d think the main issue here wasn’t Minaj’s claim that racism was the reason her video for “Anaconda” wasn’t nominated for Video of the Year, but a plain old-fashioned catfight between the two women. In other words, it was purely personal, not political, or about anything larger than the two women.

That reading has made it incredibly easy to simply insert Katy Perry and her rocky history with Swift into the story, further diverting attention from Minaj’s points. In other words, Minaj’s 8 Tweets about the nomination are being pretty much swept away by her lone response to Swift’s claim that she was pitting women against each other, which, if you need a reminder, said this: “Huh? U must not be reading my tweets. Didn't say a word about u. I love u just as much. But u should speak on this. @taylorswift13”

Here are a few examples of how that has now been turned into a “feud:”

Contrast those with this headline from BuzzFeed UK, where no one is called names, but a straightforward statement is made (one that, it should be noted, Sheeran has denied): “Ed Sheeran Said Nicki Minaj’s VMAs Race Argument Is “Redundant.”” That’s a far cry from many of the Minaj/Swift headlines, which capitalized on the supposed rivalry between the two, ignoring the fact that Minaj wasn’t, in fact, calling out Swift, but MTV. That’s not to say that every piece on the topic has gone with the “feud” angle, but enough have to make it noteworthy.

Playing up the idea of two women hating each other makes it easy for that to become the story, while ignoring what started it all. As Alexandra Samuels argued at The Daily Dot, “The exchange between Swift and Minaj could’ve been framed as an intellectual conversation between industry peers about how racism and sexism intersect. But it was simply regarded as a “feud” for cheap clicks and retweets. That very reaction proves Minaj’s point—black female artists don’t get the respect they deserve, and white women are almost always presumed better by comparison.”

When we take what could have been a productive discussion about the valid points Minaj raised, about how much skin color and size affect how a performer’s videos are treated, into a she said/she said, focused solely on the supposed ire between the two women, we do everyone a disservice. To reiterate, notice that even though Taylor Swift has been rightly called out for making Minaj’s Tweets personal, there wasn’t actually personal attacks between the two. Minaj responded that she wasn’t, in fact, doing what Swift accused her of, but talking about structural issues, ones that go beyond the music industry. Really, the story should have ended there, but perhaps because of the nature of social media, or the responses their brief exchange drew, this has blown up in a way a close reading would show that neither party intended.

As Minaj rightly argued on her Instagram account: “Nothing to do with any of the women, but everything to do with a system that doesn't credit black women for their contributions to pop culture as freely/quickly as they reward others. We are huge trendsetters, not second class citizens that get thrown crumbs. This isn't anger. This is #information.”

The feud narrative plays into a long-standing view that women disagreeing with each other automatically means “catfight,” rather than “two people who don’t necessarily see eye to eye.” It’s one thing when it’s an actual argument, but this wasn’t. This was two famous, powerful women disagreeing in a very public forum, but neither one called the other names; in fact, as Minaj rightly stated, they both went out of their way to say they “love” each other.

As Amy O’Dell points out at Cosmopolitan, “Women being mean to one another is not the problem; it's just become the Internet's de facto distraction from having a real conversation about things that are actually troubling in the world. Nor does women being nice to one another define feminism or guarantee its future.” While on the one hand, perhaps Minaj’s points are getting more attention; there’s even been the suggestion that MTV will play this up during the awards show. An insider told HollywoodLife.com, “People at MTV are already putting together ideas to present to Taylor and Nicki.  They have thought of them performing together, presenting an award together or doing a skit for the show.” It should be noted that HollywoodLife is one of the outlets that’s been hyping the “shocking MTV VMA feud” angle, in a broadcast that asked viewers to share whether they’re “Team Taylor” or “Team Nicki.” On the other hand, especially when Katy Perry has entered the mix, it becomes increasingly easy to forget about the genuine questions Minaj raised.

The biggest problem with assuming this is an interpersonal beef between the two stars is that then the “solution” can seem simple—get the two to kiss and make up. This is not about the Minaj and Swift needing to “make amends,” as one Tweeter suggested, because theirs was more of a misunderstanding than a fight in the first place.

This isn’t about Taylor wanting to “put Nicki in her place,” as one article claimed. Swift was wrong, myopic and narcissistic, and utterly misunderstood the context of Minaj’s tweets. That seems pretty clear, but she this wasn’t a fight between the two, and to call it one is far more of an insult to Minaj’s meaning than anything Swift has done. Now it’s become almost a celebrity free-for-all about who’s rallying around which star, as if that is the most important issue at play. Let’s remember: it’s not.