The strange new world of MSNBC: Anatomy of a cable-news identity crisis

In a historically gruesome ratings slump, the network is calling in reinforcements. Brace yourselves 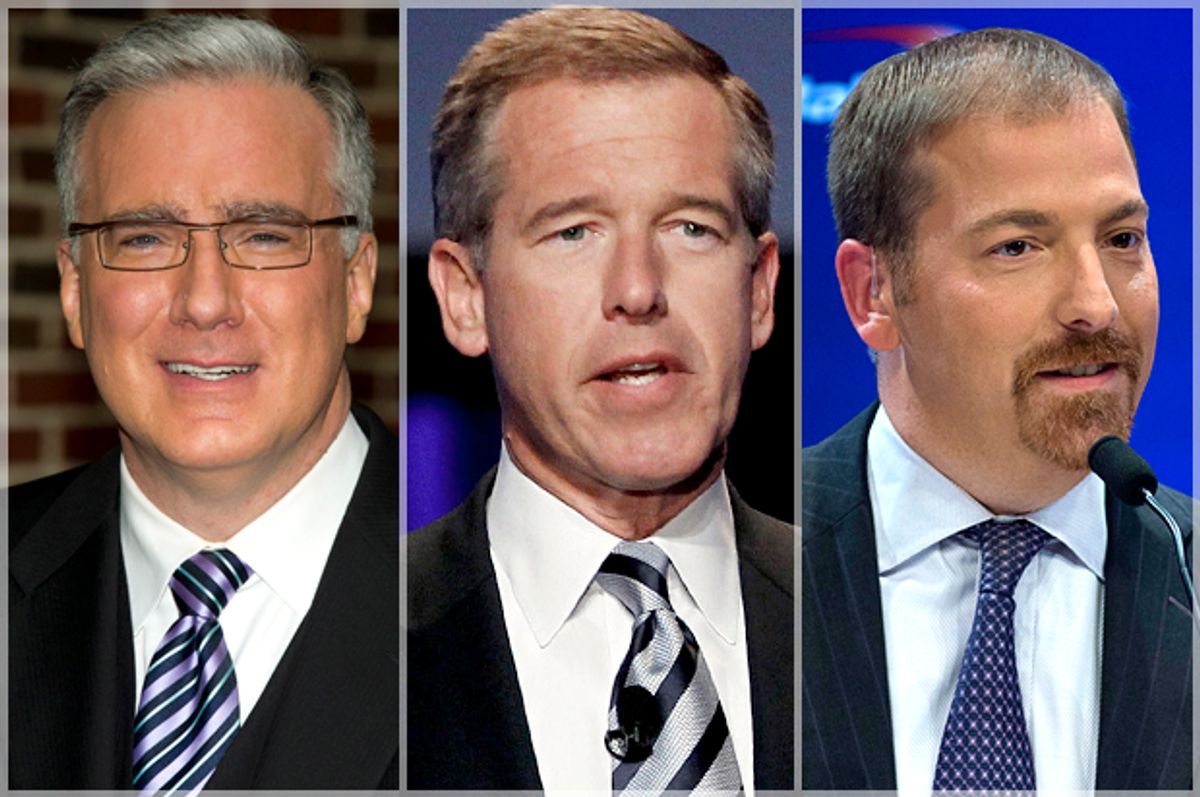 Chuck Todd must sometimes feel like the Dr. Frankenstein of NBC News. It seems like just yesterday that the goateed wonder was handed the rotting carcass of "Meet the Press" and told to raise it from the dead. Now, Todd is being tasked with a second resurrection—this time, of MSNBC, which is going through a rather hellish stretch.

There are big changes afoot at the cable news channel, and Todd is apparently the centerpiece of those changes. Politico's Mike Allen reported on Thursday that Todd will be returning to MSNBC to host a weekday politics show "as part of a massive schedule makeover" engineered by NBC News Chairman Andrew Lack and MSNBC President Phil Griffin.

This morning, Mediaite fleshed out what some of that fire sale will look like. It would seem that MSNBC is doing away with most of its daytime programming. If you were a fan of shows like "The Cycle," "Now With Alex Wagner" or "The Ed Show," get ready to say goodbye.

Of course, MSNBC's big problem is that there are quite a bit fewer fans of those shows than it would prefer to have. To put it plainly, barely anyone is tuning in during huge chunks of the day, especially in the crucial A25-54 demo, which is the only one the network really cares about. In the last quarter, MSNBC was down by double digits in every key ratings category.

Time for a rethink, then. It will hardly be the first one for MSNBC. The network is the Madonna of the airwaves, reinventing itself repeatedly. The network started way back in 1996 as a joint venture between Microsoft and NBC, and aired everything from a nightly news hour with Brian Williams (who's now expected to return) to—and I am totally telling you the truth now—a technology show hosted by Soledad O'Brien and a computer-animated skater-nerd-dude named Dev.

MSNBC muddled along like that for a while, taking a post-9/11 detour into conservatism. This is when Phil Donahue was fired for being too anti-war and far-right radio host Michael Savage was briefly given his own show.

Then, Keith Olbermann and, even more importantly, Rachel Maddow came along, and with them came ratings success and a completely new identity as TV's home for liberals. In doing so, it consciously turned away from hard news—Griffin even told the New York Times that his channel was "not the place" for breaking news—and instead dubbed itself "The Place For Politics."

That would all be fine—if only people were watching. But they're not anymore, at least for a large portion of the day.

There are lots of things you could point to as explanations for MSNBC's meltdown. It hasn't established the kind of primal, emotional connection that Fox News has with its fanatically loyal following, which sees that network as a core part of its identity and which stays with it no matter what's going on or who is in power. Moreover, events have not been kind to "The Place For Politics." Politics—at least in the Washington sense—have been frozen in place for years, and the Obama euphoria that sustained MSNBC at its peak has long since passed. Meanwhile, it sometimes seems as if there's more breaking news happening than at any other time in history, and when breaking news happens, people flee MSNBC in droves.

But you would think that MSNBC might have been able to harness the energy of the explosion of black activism and the increasingly muscular social liberalism of the last year. Equally troubling to Lack and Griffin must be the channel's seeming inability to gain traction even as the Republican presidential primary descends into farce and Hillary Clinton sails towards a nomination.

Then there's the hosts themselves. A string of daytime anchors, like Ronan Farrow and Joy Reid, has been tried and found wanting. Chris Hayes is a likable and intelligent person who has never come close to challenging the king of cable, Bill O'Reilly, in his time slot. Lawrence O'Donnell and Ed Schultz have long since become tired caricatures of themselves.

Faced with all of this, Lack and Griffin are tearing everything up and starting—mostly—from scratch. Hayes has had a target on his back for months. Al Sharpton could also be yanked. It's even been rumored that, in what could count as one of the greatest "hell freezing over" moments in TV news history, Keith Olbermann could come back. (Count me as a skeptic on that one, but he's certainly available.)

Still, reverting to hard news in the daytime carries risks of its own. After all, part of the reason that MSNBC moved from news to opinion in the first place is because the Internet revolution it championed at its birth turned out to be far better at breaking news than cable TV could hope to be. CNN, which used to be the perennial basket case of the cable news landscape, has righted itself somewhat by replacing huge chunks of its news hours with reality shows—sorry, that's "unscripted series"—and documentaries.

So it's far from certain that throwing Chuck Todd and co. back on the air will stanch the bleeding at MSNBC. Presumably the top brass think that, since nothing is working right now, there's nothing to lose.