"You're fundamentally wrong on civics": Rachel Maddow schools Rick Santorum on the Constitution 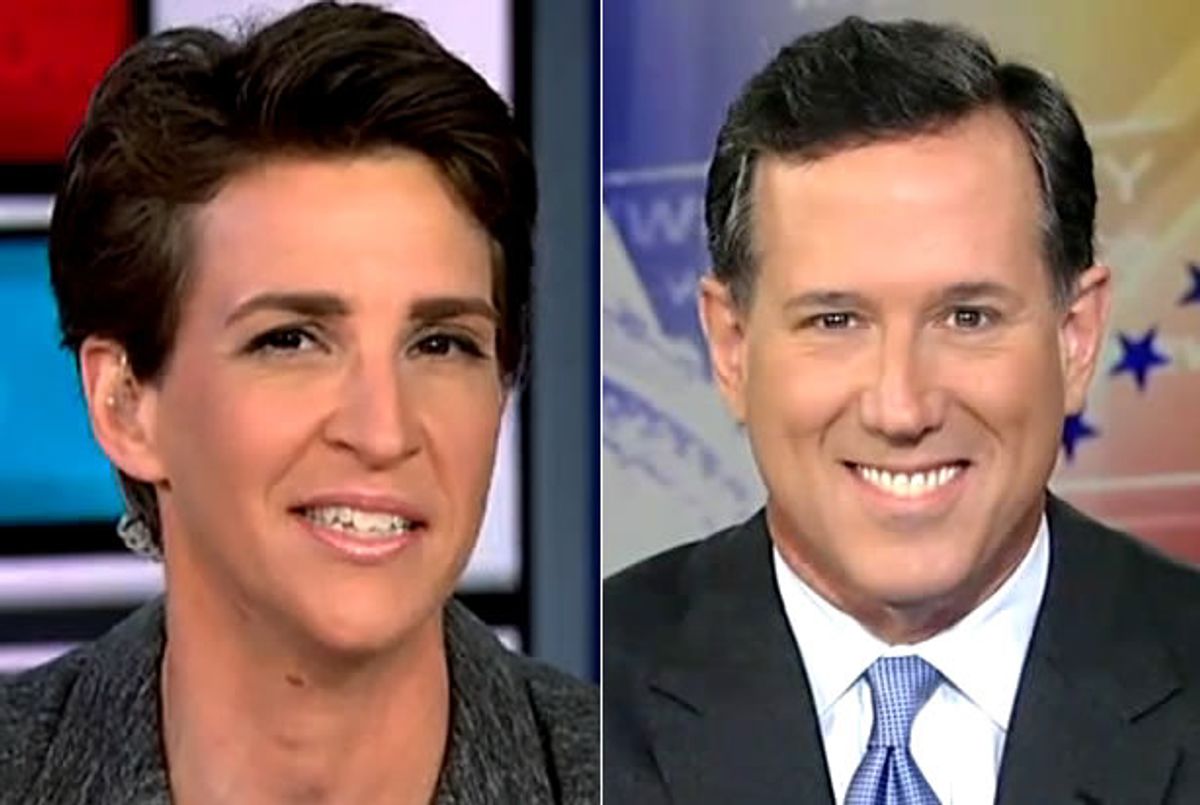 On Wednesday night's episode of "The Rachel Maddow Show," former Pennsylvania Senator Rick Santorum sat down with Rachel Maddow to discuss same-sex marriage and its impact on America, and though the conversation began cordially -- Maddow complimented him on his ability to articulate conservative positions, Santorum complimented her for not resorting to personal attacks -- it quickly became heated as they debated the finer points of constitutional law.

Santorum told Maddow that the Supreme Court overstepped its authority with its ruling in Obergefell v. Hodges, saying that the Court "is not the superior branch of government." He added that Congress could pass a law banning same-sex marriage.

"You're fundamentally wrong on civics," Maddow replied. "If there's a question as to the constitutionality of a law, it gets adjudicated. And the second syllable of that word means it gets decided in the judiciary -- the Supreme Court decides whether or not a law is constitutional."

He continued to insist that Congress could pass a law, so Maddow asked him bluntly, "do you believe Congress could just pass a national ban on same-sex marriage and would it become law?"

"Of course," he replied. "The Congress could pass anything it wants to pass. The Supreme Court could strike it down again."

"You want them to pass a moot bill that would just be struck down?" she asked.

"It wouldn't be moot," Santorum explained, because the composition of the Court could have changed since it made the current same-sex marriage ruling, or justices could have misgivings about having "misread the tea leaves that are going on in America right now."

Failing to make anyway further headway in this conversation, Maddow turned to more general issues. "Do you believe people choose to be gay?" she asked.

"I've never answered that question because I don't really know the answer to it," he said. "But I suspect that there's all sorts of reasons that people end up the way they are."

She also challenged him on his most controversial statement, "the man-on-dog thing," which he denied having said. "Actually, if you read the quote, and I challenge you to do it, the reporter actually put the word 'gay' in there," he said. "I never said that."

"What I said was, 'if people have the right to consensual activity, then they have the right to and I listed all these different things,'" he continued, "and I’m just saying, that the court opened up a Pandora's box."

"I’m saying is that people will make arguments for consensual activity," he replied. "That's what I said."

"Then why did you say the word 'dog'?" she asked. He fumbled around for an answer, before finally admitting that he wished he had never said what he just spent five minutes denying he ever had.