Obama's Jon Stewart problem: What "The Daily Show" and Colbert should have taught him about Fox News

He appeared seven times. If he'd watched it seven years ago he'd have understood Fox and had a different presidency 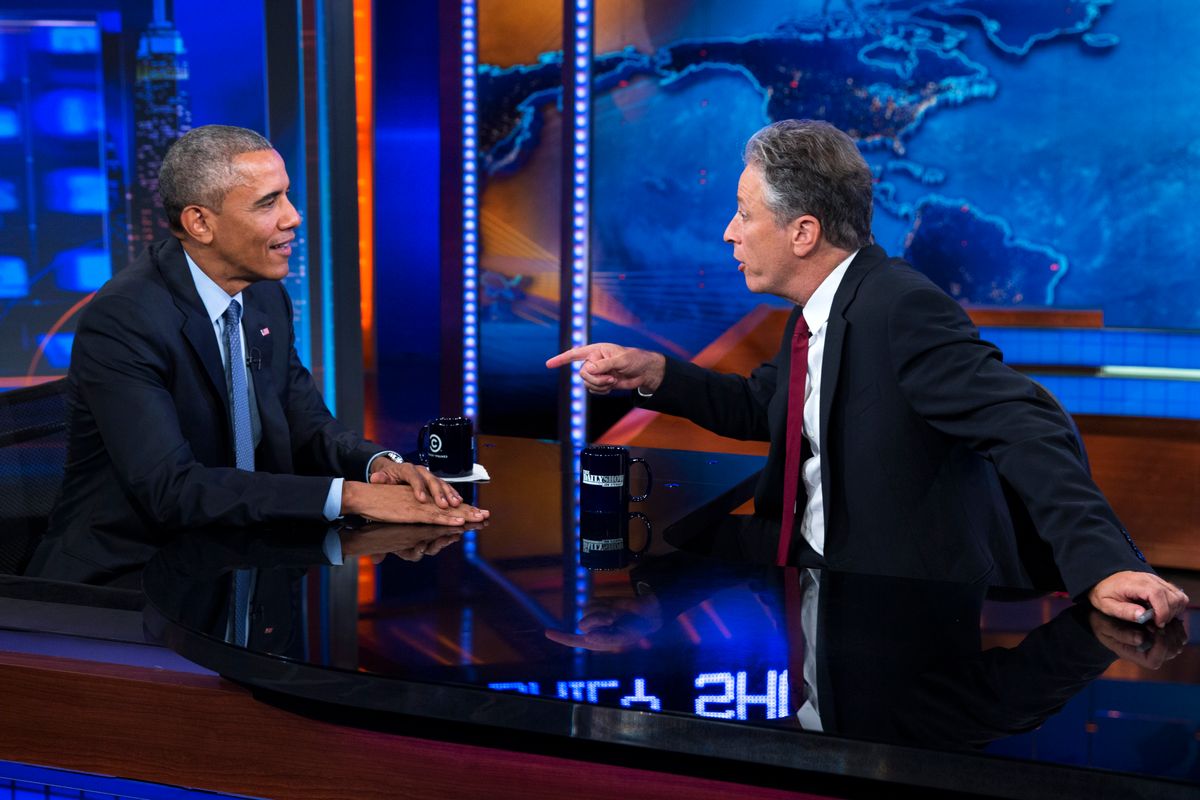 Much is being made of President Obama’s candid interview with Jon Stewart on one of the final episodes of his "Daily Show" tenure. It’s the end of an era for Obama too: He appeared as a guest seven times over the years.

While the revelations of the interview are interesting—Stewart continuing to press Obama on what he still has left to do, Obama chuckling that the GOP must love Trump because he “makes them look less crazy” – the last interview brings up one compelling question: What if Obama had actually watched the show more? Would he have learned more about the Republican mind? Would he have had a better grasp on the political challenges facing our nation, and his presidency?

Some will say that the president had better things to do with his time than watch a show on Comedy Central. Stewart, who loves to call himself just a comedian, might be one of them. That might make sense—except for the fact that his was no ordinary comedy show.

Stewart, like his colleague Stephen Colbert, had insight into U.S. politics Obama never seemed to understand.  “The Daily Show” and “The Colbert Report” were one of the main sources of truth telling about U.S. politics and the nature of the Republican Party before and during the Obama presidency. Their hosts were more trusted than most reporters, and their viewers were more knowledgeable about current events than those of cable news.

But most important, audience knowledge came from satire.  Stewart and Colbert not only exposed fallacies, flaws in logic, and misrepresentations spun by politicians and the media, but they also encouraged critical thinking.  They didn’t just report that Fox News lied: They gave viewers a glimpse into the twisted thinking, hubris, disdain for large segments of society, and closed-mindedness that forms the common, core mind-set of Fox viewers.

Long before Obama launched his presidential campaign, Colbert and Stewart were well aware that extremist Republicans who regularly consume Fox News live in an alternate reality world, where facts “come from the gut” and where it makes sense to blame misfortune on the misfortunate.  Most important, Stewart and Colbert were aware that Fox News Republicans are immune to the force of reason. In fact, as interview after interview revealed on both shows, they simply live in a fantasy world.

Now it may seem to be an over-generalization to suggest that Fox News Republicans create their own reality absent both facts and reason, but we have significant evidence that this is indeed a social epidemic. Chris Mooney cites polls, scientific data and other evidence of what he calls the “Fox News effect”—“explaining how this station has brought about a hurricane-like intensification of factual error, misinformation and unsupportable but ideologically charged beliefs on the conservative side of the aisle.”

Stewart knew Fox News viewers were overwhelmingly misinformed.  Back in 2011 he spoke with Fox News host Chris Wallace on media bias. Stewart commented: “The most consistently misinformed? Fox, Fox viewers, consistently, every poll.” The problem with misinformed viewers is that they can’t be reasoned with because they already hold false beliefs.  As research by Brendan Nyhan and Jason Reifler explains, there is a vast difference between an uninformed public and a misinformed one. An uninformed public is ignorant and can be educated; a misinformed one is delusional—and that’s far more dangerous.

But it’s worse. Party affiliation today is more like religious belief than reasoned civic interest. And this is increasingly true on both sides of the aisle. When Republican leaders make outrageous comments, such as the infamous Trump comments about Mexican immigrants as racists, hardly any party leaders critique him.  Then when Trump goes off on John McCain for being captured, they all chime in, because defending troops is part of the party line. Democrats skirt issues, use talking points, and work the media too, a fact that Stewart brought up in his interview with Obama and that he previously raised with other Democratic guests of the show.

But it would be fair to say that in the era of the “Fox News effect” and Tea Party politics we are witnessing a mainstreaming of extreme conservative views that are regularly divorced from fact. Knowing and understanding that reality is key for any politician hoping to advance a progressive agenda.  Certainly viewers of Stewart and Colbert were regularly exposed to that fundamental truth of contemporary U.S. society.

The only glimpse Obama gave us that he understood was when he referenced the Stewart/Colbert Rally to Restore Sanity from 2010 during a small group discussion:

"Jon Stewart, you know, the host of 'The Daily Show,' apparently he's going to host a rally called something like Americans in favor of a return to sanity, or something like that. And his point was 70 percent of the people – it doesn’t matter what political affiliation –70 percent of folks are just like you. They go about their business. They work hard every day. They’re looking after their families. They don’t go around calling people names. They don’t make stuff up.”

The problem, though, is that the 30 percent is really loud. And some of them have a disproportionate amount of power and influence in the U.S. system.

Obama has yet to find a way to openly address this growing problem.  He explained to Stewart that one key problem was the difficulty of having a common conversation over something other than the Super Bowl, but he failed to talk about why such a conversation might be a challenge.  This from the man who spent years dealing with incessant calls for his birth certificate. You can’t have a common conversation in this country if only part of it believes in reality.

Obama made it clear that he knew that Stewart was “leaving an important job.”  He even joked that he would not let him step down: “I’m issuing a new executive order that Jon Stewart cannot leave the show.” Just as Obama issued “the decree” on one of Colbert’s final episodes, the president playfully exercised executive power.

He was a great last guest.  But imagine if he had been an actual viewer.