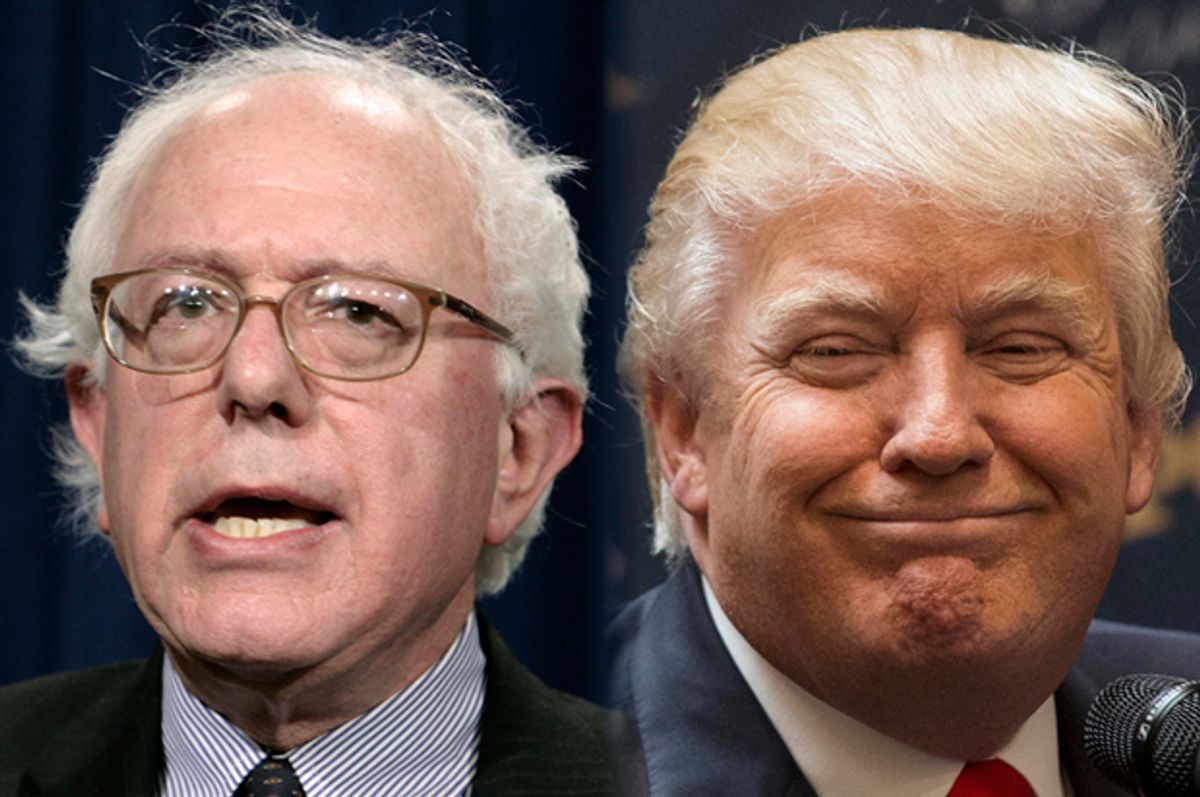 Donald Trump and Bernie Sanders are not the same. At all. Sanders is not the Trump of the left, and vice versa. I feel uncomfortable even joining them in the same sentence. But the two campaigns’ shocking early successes do reflect the same growing helplessness and anger at a Washington many increasingly feel to be distant, unresponsive, dynastic and unconcerned with regular citizens’ lives. We're finding that if you’re a truth-to-power speaker, there’s a ready-made following in each party. At least, Trump’s freewheeling, shoot-from-the-hip disdain for GOP leaders (and Democrats when he gets around to it) looks like speaking truth to power to followers; and Sanders is stubbornly reminding his party’s leadership about its mistakes. They’re both tapping into the same bipartisan well of unhappiness with our government. Trust in government is at its lowest sustained trough since Pew started collecting that data in 1958, and Trump and Sanders represent a radical choice in each party, each man an outsider against establishment favorites named Clinton and Bush.

Neither Trump nor Sanders even belongs to the party for whose nomination he runs. Trump said he identified “more as Democrat” in 2004, declined to affiliate with the party in 2012, and up until the 2012 election had given “significantly more money to Democrats.” Sanders is proudly an Independent. He describes himself as a “democratic socialist” and boasted  in April that he is “outside of the two-party system, defeating Democrats and Republicans.”

So neither feels the need then to play ball according to party rules. They weren’t reared in their parties. Trump has gone on a rampage against GOP establishment figures like John McCain and Lindsey Graham recently, which has been verboten and in breach of Reagan’s “Eleventh Commandment” that “thou shalt not speak ill of any fellow Republican.” But the recent ad hominem and dirty internecine attacks of the sort hitherto reserved for Democratic opponents actually boosted Trump’s poll numbers and sent him firmly into the frontrunner position.

Bernie Sanders is the anti-Trump and committed to not personally attack Hillary Clinton. He prides himself on his career-long avoidance of such tactics. “I’ve never run a negative ad in my life,” he told The Nation’s John Nichols earlier this month. ”I’m supposed to be telling the people that my opponents are the worst people in the world and I’m great,” he said. “That’s crap; I don’t believe that for a second…” But his leftist critique constitutes a gigantic subtweet against the Clintons, whose centrism has defined the direction of the party since the early '90s, if not the late '80s. He doesn’t have to name the Clintons to be attacking virtually their entire political project.

Sanders often boasts that he’s “the longest serving independent in the history of the U.S. Congress,” and in 2006 he became the first socialist ever elected to the U.S. Senate. He’s running as a Democrat only because that’s the only lane available to make a meaningful run at the White House in a political duopoly.

Both are true outsiders. If nominated, Trump would be the first Republican candidate never to have served in elective office since Eisenhower, who did have a little gig as Supreme Allied Commander in WWII but no elective position. Republican nominee Wendell Willkie in 1940 is the last to have not served in government before his run. Sanders, of course, would be the first socialist president and complete the dream of Eugene V. Debs, the early 20th century socialist presidential candidate who garnered nearly a million votes in 1920.

In recent decades, there have been a few outsider-like candidates who have done well in primaries, but not actual outsiders like Trump and Sanders. Republican Pat Buchanan in 1996 was something of a well-performing wild card, but he was a party man, serving in both the Nixon and Reagan administrations. Democrat Howard Dean was labeled an “outsider” in 2004 and enjoyed some unlikely success early in the primaries. But Dean wasn’t actually an outsider. The former Vermont governor went on to chair the Democratic National Committee, the organization “responsible for governing the Democratic Party.” So the most insider position there is, basically. Jesse Jackson’s run in 1988 is probably the closest modern-era comparison to this election’s two outsiders, but Jackson, it turned out, represented the last gasp of the liberal wing of the Democratic Party for two decades, not the resurgence that Sanders’ campaign represents.

The 1988 primaries do share some similarities with this election’s surprising early showings by Sanders and Trump. Jackson’s more radical, outsider campaign did, like Sanders’, have a conservative counterpart in televangelist Pat Robertson, who could be thought of as the Trump. The two outsiders won 12 state primaries between them.

But in 1988 there wasn’t the same populist anger that’s marked the last 6 or 7 years. The Tea Party and Occupy Wall Street, whatever your opinion of the two movements, were manifestations of a deep distrust of Washington that transcended party. The spark that ignited what would become the Tea Party occurred under a Republican president: the rejection of President Bush’s Wall Street bailout in 2008, a Republican-led “stunning defiance of President Bush and Congressional leaders of both parties.” Occupy was born under Obama in 2011 and presented a progressive challenge to the Democratic establishment. Both movements initiated a new period of intra-party conflict in each of Washington’s two political houses.

The electorate of both parties is, as a result, accustomed to internecine fighting in a way that’s been absent. No longer is it simply the other party and its leadership to blame for our ills but voters’ own party leadership. The last several elections have seen “almost unprecedented” political carnage on the Republican side by Tea Party insurgents, and Senator Elizabeth Warren and Sanders form the beginnings of a progressive antagonist wing of the Democratic Party.

It’s a perfect storm. With nearly every measure of trust and approval of Washington showing historic levels of disdain with the establishment, the two parties proffer a Bush and a Clinton as the most likely nominees. Bush and Clinton’s fundraising utterly dominate everyone else in the field, and each party’s base sees machinations and string-pulling. Neither Trump nor Sanders will sit in the Oval Office unless invited by the next president, but it’s time to start paying attention to the anger. Party leaders can dismiss Trump and Sanders, but they shouldn’t dismiss the millions they represent. All a rabble needs is a good rouser. Neither candidate is right for that job, but there is almost certainly someone out there who is, someone with a 2020 vision.