Donald Trump is an actual fascist: What his surging popularity says about the GOP base

The word "fascist" has been abused by the left over the years. But a look at Trump's rhetoric shows scary parallels 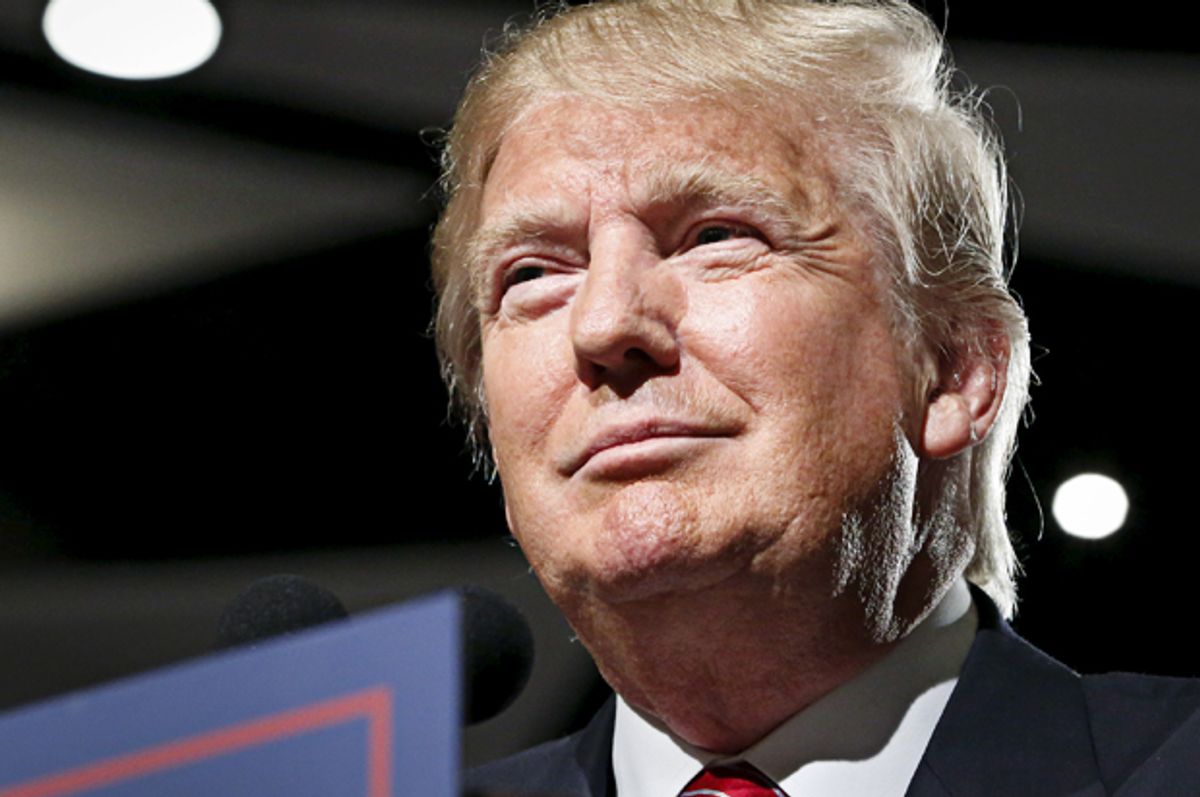 In the political discussion of today, there always comes a risk of being discounted as a crackpot when using a word like “fascist” to describe a political opponent. The word, much like “socialist,” has been so abused since the fall of fascism that it lost its meaning quite some time ago. Comparisons of modern leaders to Hitler tend to be completely void of any substance, and there is even an Internet adage, “Godwin’s law,” that says, “As an online discussion grows longer, the probability of a comparison involving Nazis or Hitler approaches one.”

In a recent article by Jeffrey Tucker, however, it is argued, quite justly in my opinion, that Donald Trump, whether he knows it or not, is a fascist (or is at least acting like one). Much like Mussolini and Hitler, Trump is a demagogue dedicated to riling up the people (particularly conservatives) with race baiting, traditionalism and strongman tough talk -- and, according to polls, it’s working -- for now. Tucker writes:

“Trump has tapped into it, absorbing unto his own political ambitions every conceivable resentment (race, class, sex, religion, economic) and promising a new order of things under his mighty hand.”

No doubt about it, Donald Trump has decided to stir the pot, and, as Tucker says, he seems to be running for a CEO position, rather than president of a nation. Trump discusses Iran and Mexico as if they were competing corporations, and says that, as president, or CEO, he will drive them into the ground, make them file for bankruptcy -- something Trump legitimately knows a thing or two about. Trump, of course, is largely taken as a joke, and most rational commentators assume he is doing this for publicity -- which he is certainly getting.

The thing is, his style -- full of race baiting, xenophobia and belligerent nationalism -- is not unique to Trump; he is simply the most blatant and vocal about it. There’s a reason he’s leading in the GOP polls: the party's base likes what he’s saying. The people are angry about illegal immigrants murdering white women (anyone who has followed Bill O’Reilly over the past week knows what I’m talking about), homosexuals destroying the tradition of marriage, and so on. Much like fascism reacted to modernity and social progress in the early 20th century, right-wingers are reacting angrily to social progress of the new century. (Of course, there has been no economic progress, which is why the left is also angry.)

So is the GOP becoming the new fascist party? That might be an exaggeration, but it does share many similar features, and Trump, with his demagogic style, is simply exposing how very similar the passions of the GOP base are to the passions of fascism of the early 20th century.

The modern GOP is a party of unwavering and dogmatic patriotism mixed with traditionalism and intolerance. The social progression we have been witnessing over the past decade in America, most clearly with the acceptance of the LGBT community, seems to be triggering a reactionary movement on the right. We see this most recently with the religious freedom controversies and the angry protests of the Supreme Court’s gay marriage ruling. Fascism of the early 20th century was also largely a negative reaction to modernity (in a social sense at least; fascists did tend to worship technology). Communism, which was the ultimate evil to fascists, promoted the destruction of traditional institutions such as the family, the bourgeois state and organized religion. In some ways, fascism was the conservative answer to communism -- the defender of tradition.

It was also a very contradictory ideology, as Umberto Eco describes in his essay, “Ur-Fascism:”

“Fascism was a fuzzy totalitarianism, a collage of different philosophical and political ideas, a beehive of contradictions. Can one conceive of a truly totalitarian movement that was able to combine monarchy with revolution, the Royal Army with Mussolini's personal milizia, the grant of privileges to the Church with state education extolling violence, absolute state control with a free market?”

The modern GOP is also somewhat contradictory. Its followers, for example, promote free market ideals and despise welfare for the poor, while exclaiming the worship of Jesus Christ, whose teachings are almost socialistic.

Overall, however, the GOP has a pretty straightforward idea of its platform. Like fascism, tradition is holy -- the tradition of marriage, family values, Christian ideals. Controversy over the confederate flag has also been based largely on tradition -- a tradition that the South cannot give up. Another similarity is its belligerence. After news of the Iran deal agreement came out last week, the GOP faithfuls were outraged that America would actually practice diplomacy with an Islamic country in the Middle East. President Obama responded to criticism from the right by saying,

“I challenge those who are objecting to this agreement to, Number One, read the agreement, explain specifically where they think... and then present an alternative. If the alternative is we should bring Iran to heel through military force, then those critics should say so.”

The GOP alternative would indeed be military force, as it has been many times before. (This is not to say the Democratic party is not also a belligerent force, which it is. But clearly not as outright hawkish as the GOP).

Beyond these values, the GOP tends to preach and practice intolerance, xenophobia, nationalism and anti-democratic values (i.e., voter suppression). In many ways, the GOP is anti-enlightenment, and embraces passion over reason. The dangerous denial of climate change and other scientific facts seems to come out of the corrupt alliance of anti-intellectual traditionalism and corporate influence (i.e., oil and gas).

Now, the fact of the matter is that fascism died in the mid-20th century. The GOP are obviously not fascists, but they share a family resemblance. As stated above, the base have many similar passions -- traditionalism, nationalism, intolerance towards immigrants or minorities. They react with hostility towards the social progress of others and largely believe in a ‘survival of the fittest’ ideology.

Giovanni Gentile, the "philosopher of fascism" and ghostwriter for Mussolini, said of the definition of fascism in the Encyclopedia of Italiana: “Fascism should more appropriately be called corporatism because it is a merger of state and corporate power.” This definition may very well fit the GOP ideology: a kind of corporate fascism, where large corporations have the ultimate power; where the politicians spew a hateful, intolerant ideology based on “traditional” values, on a platform funded by corporate interests, elected by the people to serve those very corporate interests; and deny environmental degradation because it would be unprofitable for the funders to do anything about it, using the anti-intellectual hostility to convince the people that it is nothing more than a left-wing conspiracy.

Donald Trump is no doubt a wealthy buffoon -- but he is a buffoon who understands the underlying passions of the GOP base. Fascist leaders also understood these passions, and knew how to exploit them for political gain. These passions may seem irrational, but they should not be underestimated.