Factory farming is killing the planet: Why the meat industry's future needs to look more like its past 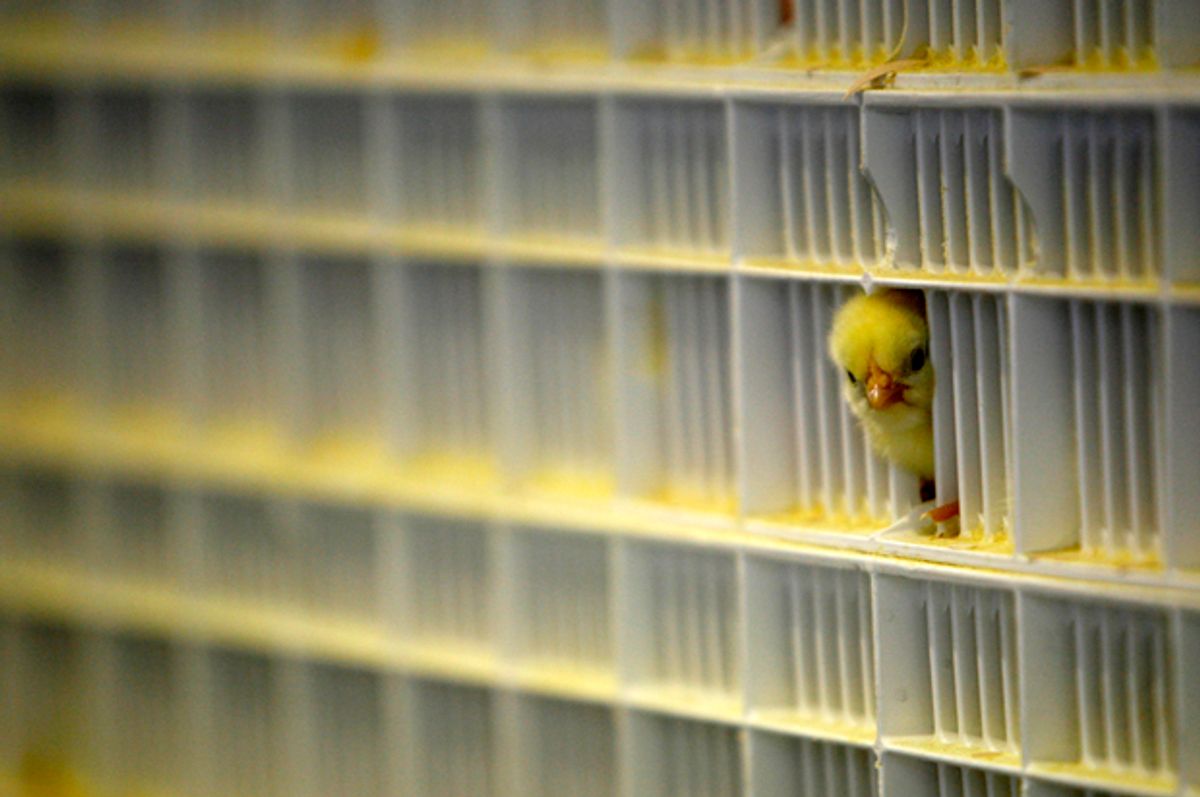 What happens when you go from never thinking about where your meat comes from to visiting 60 farms across three continents?

One thing's for sure: your food will never again look the same.

That was the case for Sonia Faruqi, whose new book, "Project Animal Farm," documents her journey from a self-described "materialistic investment banker" with an imagination informed by "Little House on the Prairie" to eyewitness to the often unsavory realities of modern-day factory farming. She emerged not just with tales of horrific abuse (although there are certainly plenty of those) but with suggestions for how -- with systemic reform and a reconsideration of just how much meat we actually need to be eating -- we can still have our meat and sleep at night, too.

“Farms are the modern '1984,'" Faruqi writes. "Official party lines are disseminated to the public and readily accepted by it. At every meal, people swallow small and large doses of lies." With ag-gag laws trying to making visits to factory farms a thing of the past, Salon spoke with Faruqi about why it's not such a bad thing if the truth causes you to lose your appetite. Our conversation has been lightly edited for clarity.

Before you started out on this project, what was the image you had in your mind of farms and where your meat came from?

The image was mixed. I had viewed organic as pastoral and picturesque. Then I learned that it wasn’t. As for the rest of the industry, other than organic, I had watched a couple of videos online, but I didn’t really know much about it. There was very much a distance. I’d never been to any farm before.

I wanted to ask you about your deconstruction of that organic label: You write about how it can mean vastly different things depending on where you're looking. When we see that label on our food, how much stock can we put in it? Does it really tell us anything?

It does tell us something, but it doesn’t tell us as much as we would hope. For instance the outdoor requirement in the U.S. and Canada is 120 days of the year, which translates to one out of three days of the year when animals are supposed to have outdoor access. That’s sometimes also treated as a maximum. If it’s not organic then the animals would generally have zero days of outdoor access, so this 120 days does make a difference.

Organic is good in areas such as not using antibiotics, chemicals, pesticides and drugs in general. But with animal welfare there does need to be more of a focus. There are some loopholes in it. There’s that loophole with dairy cows: in Canada, for two-thirds of the year they can be chained to stalls and that is still called organic. In the U.S. that loophole was closed a few years ago, which is a good thing.

Organic does have some importance as a differentiator between farms, but it hasn’t fully reached that potential yet. What would need to happen is stronger regulations and stronger inspections to make that happen.

Are there other labels that you found to be very misleading or not living up to their potential? I know "free range" is one that you mentioned.

Yes. The trouble with free range is that it’s hardly defined at all. It has very little meaning. It’s completely open to interpretation. In free range we don’t know how much outdoor access. Organic means 120 days, but for free range there is no number, the quality of outdoor access, from what age the animal has outdoor access -- these important factors are not taken into account. In chapter four you see that I’m at this turkey farm and the fence is broken. That batch of turkeys that I saw would never once step outside. But they would also be described as free range. There are these issues. Fences break, that’s fine. But then in my view the animals should no longer be defined and priced as free range. They are not at all.

How does the situation we have in the U.S. compare to what you saw going on in the developing world?

Throughout the book I run to a lot of places: the U.S., Mexico, Canada, Belize, Indonesia, Malaysia, Singapore and the United Arab Emirates. Eight very different countries. Indonesia and Belize were both fascinating. Belize is a small country where most of the farming, almost all of it, is done by Mennonite missionaries. I would describe that farming as small pastoral. These are small pastoral farms where most of the time the animals are outdoors. You constantly see cows grazing in grass fields. It’s the sort of system that existed in the U.S. and Canada and other countries about a half to one century ago, and which is very much outdated today.

Indonesia is a country that is very much in transition. It’s where the traditional farming is being replaced by the more industrial methods. Indonesia’s neighbor Malaysia, for instance, has completely changed its methods of farming from traditional and pastoral to extremely industrial. That has happened largely, or at least partially, because of fast food chains coming into the country. I found that fast food does play a role in how countries farm. As soon as fast food companies like KFC and McDonald's come to other countries they bring with them a whole mindset and a whole method of certain breeds and processes, like antibiotics and artificial insemination, that they just transport over pretty much exactly the same.

So the short answer is different countries are in different states. Some are staying pastoral because they want to. Others are becoming extremely industrial at a very fast and concerning speed and they view it as a sort of development. It’s viewed as the same thing as getting a bigger car, getting a bigger house. You are creating more factory farms, you are eating more meat as well.

There’s been a big push from fast food companies in the U.S. to rethink the way they produce their food and their meat. Do you see the potential for them to lead that kind of change in the way we raise meat, because they have so much purchasing power, in the same way that they created our current status quo?

I think that while these commitments are helpful and do offer a step in the right direction, sometimes they are reactive. They are reacting to some campaign started by some person or some organization or they are reacting in general to the public perception of fast food. Most people today in the U.S. and Canada know that fast food isn’t really good for them or the world. They are reacting to that as well. It’s tough to know how much of that is genuine versus more reactionary. But either way these steps are good. They are removing antibiotics and offering free range eggs and things. But there’s a long way to go in this line of change.

This example you saw of a pastoral farm, you call it “outdated,” but it's still something you think the world can move back towards?

Right. So in "Project Animal Farm" I divide farms into four kinds. There’s small pastoral, which I lived at in Belize. I lived with a Mennonite missionary family of women. They had a beautiful farm of a small herd of cows and small flocks of hens. They would sell every weekend at the farmers market. Living there and seeing how they work and how the pastures are managed and how the animals all have names, that was very eye-opening to me. The strong relationship between the people and the animals and the land.

Then there’s small industrial, which doesn’t really make any sense because you don’t have economies of scale. It’s industrial, but it’s not like you are necessarily reducing costs by being industrial.

Then there’s large industrial, which is more than 95 percent of the farms in the U.S. and Canada, which are factory farms. It’s essentially a large industrial operation.

Then I come up with a fourth part of this, which I believe is the solution to most of the humane and sustainability problems we are seeing. That’s large pastoral. In the book I’m not recommending that people go to the past. We move to the future while keeping the past in mind. I’ve been to a couple of these farms in the U.S. and Canada. It’s a large farm and the animals are fully outdoors. It’s pastoral, but it has economies of scale and the low costs that producers and consumers want.

It's a little closer to what someone who has never been to a farm might picture, it sounds like.

Yes, I think so. It’s a very different experience when you go to a large industrial versus a large pastoral farm. It’s completely different. The sensory feelings, which you are seeing and smelling, the conditions of the animals, the conditions of the place itself. It’s something that has not been suggested before. I’m the first person to suggest it in the book. The economy today is so global and large and scale really does matter. I think that scale and ethics don’t have to be in opposition with each other. We can have both.

Even with the world's rising demand for meat?

Yes, even with that demand. But one of the other points is that we need to reduce our meat consumption. That’s very important in all of this: (per capita) meat consumption today is about 170 pounds of meat per year in the U.S. That’s not including fish, eggs or milk. If we include all of these it becomes around 300 or so pounds a year. It’s extremely unsustainable. It’s unprecedented, such an extreme demand for meat being supplied on a daily basis. It’s inhumane, it’s unsustainable, and it’s also unnecessary.

There’s one other thing that you call for at the end of the book: increasing gender diversity in farms. Why is that such an important component of reform?

I got that idea at the Mennonite women’s farm in Belize. In this family there were sons, but they didn’t want to work on the farm. So it was very much a women-run farm. It was extremely different from all the other places, because most of the other places I visited were managed and owned by men. Animal agriculture today is very much a male-dominated industry at both worker levels and senior levels. At senior levels, one out of every 15 to 20 executives is going to be a woman. I wrote a long article in The Atlantic a couple of years ago; some of that argument is also in the book. Essentially when it comes to animals and food, men and women are shown scientifically to have different thoughts and opinions. Women are more likely to favor legislation for animals. Women eat less meat. Women eat less fast food. Women pay more attention to food safety. Women are more likely to buy organic. There’s all this statistical data, not just in the U.S., but also in Europe and other countries that does show a difference between men and women and attitudes towards food and animals. Gender diversity is something that’s good in any field. Any field that’s male-dominated we’ve seen that it should have more women, whether we are talking about science, law, the police force. In agriculture it’s perhaps more, or at least as much, as in these areas because the attitudes and opinions toward animals and food issues do vary by gender.