My terrifying Kilimanjaro climb: How I expanded my limits, but almost lost my mind

I knew I was susceptible to altitude sickness. So what made me try to ascend this 20,000-foot summit? 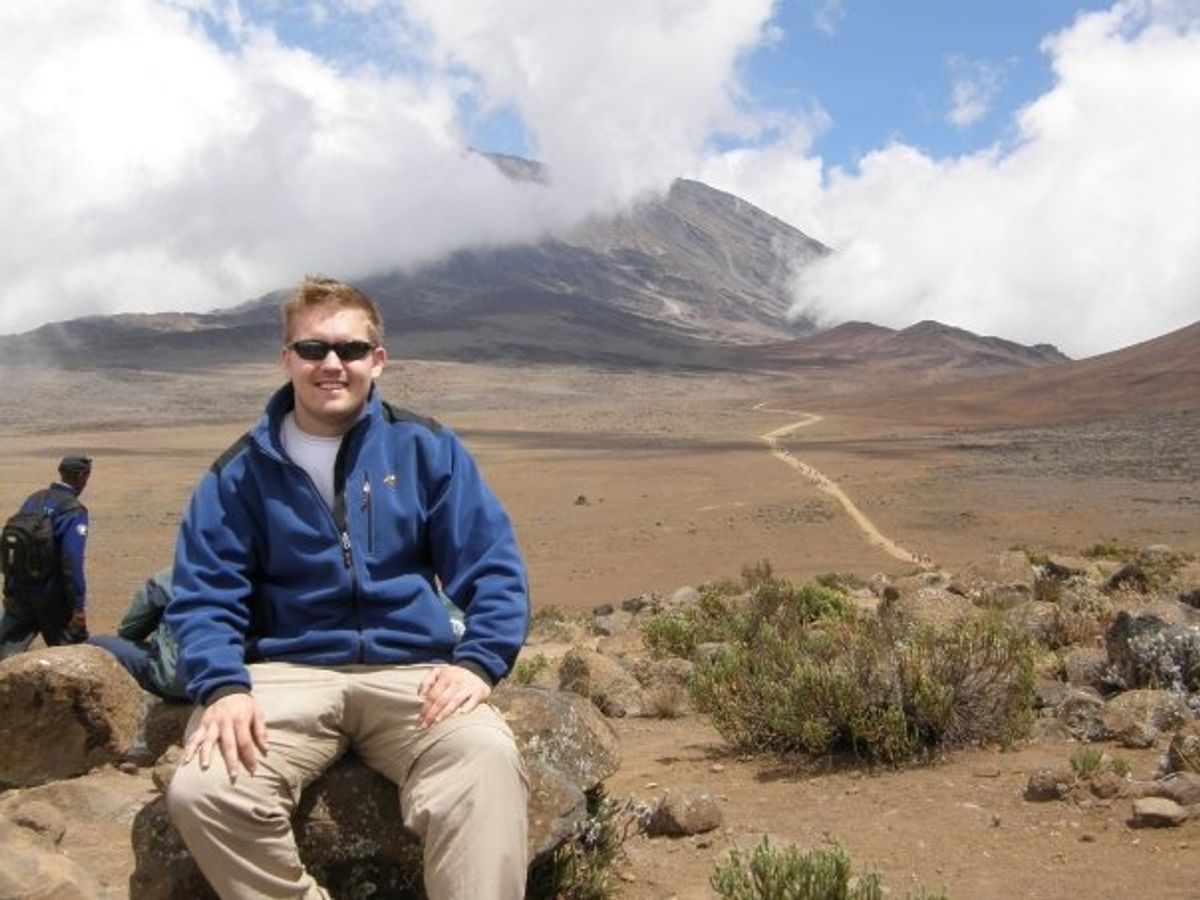 Hours before our attempt to summit Mount Kilimanjaro, I slid into a sleeping bag in our hut at 15,000 feet and tried to nap. In what seemed like minutes, I awoke out of breath, gasping. In the bunk bed below, my friend slept soundly. He described himself as a couch potato. I’d recently run a marathon. Yet, he was the one comfortable at altitude while my head felt like it was pinned between the pavement and the wheel of a semi-trailer. It was the most wicked of hangovers without a remedy.

Even before I bought a plane ticket to East Africa, I knew I was susceptible to altitude sickness. A trip to Colorado years ago made that painfully clear. Yet I had journeyed to Tanzania with visions of a summit sunrise on Africa’s highest peak. I convinced myself I’d be fine. Now, trying to sleep before our attempt to summit, my body was telling me just how delusional I’d been. Ambition had blinded me to the truth. I was vulnerable, and there was no way to avoid it.

At midnight, our guide woke us from a restless slumber and porters prepared food. We were urged to eat, but the thought was as appealing as downing a candy bar after a pint of ice cream. I strapped a headlamp to my forehead and gazed up at the last trail we’d ascend, a series of switchbacks culminating at the peak, nearly 20,000 feet above the savannah of Tanzania.

As I clicked on my lamp, I searched my past for precedents of uncommon endurance and courage, hoping the memories of football games, rugby matches, triathlons and marathons might steel my resolve and help me overcome the inevitable pain. But no memory snapped me out of my oxygen-deprived stupor. Our guide beckoned us to the trailhead, and I knew nothing but turning back would unscrew the vise squeezing my brain. In such rarefied air, illusions seemed to provide little immunity. My headache would persist, most likely worsen.

On the border of Kenya and Tanzania, Mount Kilimanjaro rises to 19,340 majestic feet. We had climbed the Marangu route, the least technical trail up “Kili,” which featured stops over six days at huts with bunk beds, sponge mattresses and pillows. The first day of our climb began in the rain forest at the Marangu gate at 6,046 feet. That morning we hiked through high grasslands and sprawling vegetation and then slept at Mandara hut at 8,858 feet. The second day we trekked to Horombo hut at 12,205 feet. Higher altitude, thinner air. With the decreased air pressure, less oxygen enters your lungs and therefore your bloodstream.

I wasn’t in any noticeable pain at 10,000 feet—the altitude where symptoms of Acute Mountain Sickness (AMS) typically emerge—but I was breathing faster and more heavily. To adjust to the thin air, our guide had built an acclimatization day into our itinerary, which included ascending to the Mawenzi hut at 14,160 feet, where we spent half-a-day relaxing, and then returning to Horombo hut for the night. It’s a classic trick mountaineers have used for centuries. “Climb high, sleep low,” means you reach a maximum altitude and then return to a lower height to sleep. The jolt stimulates short-term physiological adaptions, such as an increase in respiration as well as a faster and more forcefully pumping heart. However, six days at high altitude doesn’t allow for long-term adaptations, a process that can take weeks.

On the fourth day, we left Horombo hut and headed to Kibo hut. It was the last stop before the summit. At this point, I was a prisoner to the altitude, the thin air a constant reminder that I was a stranger in a strange land. I had no appetite. I was always thirsty. I felt light-headed, intoxicated. I was dog-tired and dizzy. Tylenol didn’t put a dent in the headache, and lying down only made the situation worse. I dry-heaved often, and always felt on the verge of vomiting. Terrain on which I could probably do a handstand at sea level became a perilous tightrope walk. Of course, we had taken precautions. We ate a diet high in carbohydrates, which is known to enhance altitude tolerance. We took a prescription drug called acetazolamide to prevent acute mountain sickness. But it had no effect other than to make my toes and fingers tingle.

At the last hut on Kilimanjaro, we weren't in the infamous “Death Zone”—the point at 25,000 feet upon which your body begins to  consume itself to produce energy—it was more like the bend-your-arm-behind-your-back-and-say-uncle zone. With altitude sickness, fluid begins to accumulate in the lungs, a condition known as pulmonary edema. A far graver condition can follow called cerebral edema, which can induce a coma and death. The only treatment is to descend.

Before we left for Uhuru peak, I asked our guide why we were leaving at midnight. He said it was best we not be able to see what we were climbing. Indeed, even from our limited point of view the trail, composed of grey ash and loose stones, looked nightmarish. With each arduous step forward I slid back two. Longing for comfort, for oxygen, I wished time away. I tried mental tricks. I dreamed of cold beers and Sunday football. I counted my steps, dedicated strides to friends and family. None of them helped. Behind me, my friend occasionally braced me as I lost my footing and staggered.

As we trudged upward through the frigid air, we passed other hikers also stricken by altitude sickness. The scenes were apocalyptic, people dry-heaving and holding their heads in their hands. They looked the way a fish does when tossed onto the floor of a boat—stunned, breathless, ready to die. I recalled the first stories of altitude sickness in the text, "Ch'ien Han Shu," a historical account of China from 206 BC to 25 AD. “Again on passing the Great Headache Mountain, the Little Headache Mountain and the Red Land and the Fever Slope, men's bodies become feverish, they lose color and are attacked with headaches and vomiting,” was how early climbers described the route between China and Afghanistan.

After six torturous hours, we reached the rim of Uhuru's crater. As if by voodoo magic, the sun poked through the clouds. Radiant streaks of red and orange glistened off toothed glaciers, warming the air and climbers’ hearts. I was relieved to be standing at Africa’s highest point, my eyes flitting across milky clouds. I found myself teary-eyed and dreamy, and wondering about my decision to climb the big mountain. I knew I likely would suffer. I came anyway. I felt relieved that I hadn’t hurt myself. Our guide had noticed the symptoms of altitude sickness; it was written all over my face. Twice he had asked me if I wanted to turn back, and twice I had rejected the notion.

We still had to descend, the most dangerous part of climbing any mountain. We took a different route down than the hellish route up, and it proved heavenly. The first section of the trail was a long slope of warm sand and rock fragments, which I sprinted through, sloshing my legs. Breathing came more freely.

The adventure made me think that achievers are a peculiar, sometimes dishonest bunch, mostly to themselves. Not admitting our vulnerabilities can be a strength. Perhaps a foolish one, but a strength nonetheless. It allows us to transform ourselves, to move beyond our perceived boundaries. Mountains, therefore, help us face reality when we have willingly suppressed it. Rather than banish truth, they force us to embrace it, make peace with it. Because no matter how hard we try, the truth makes itself known.