Being female is a wound that never heals: How Ani Bezzerides emerged as the real hero of "True Detective" 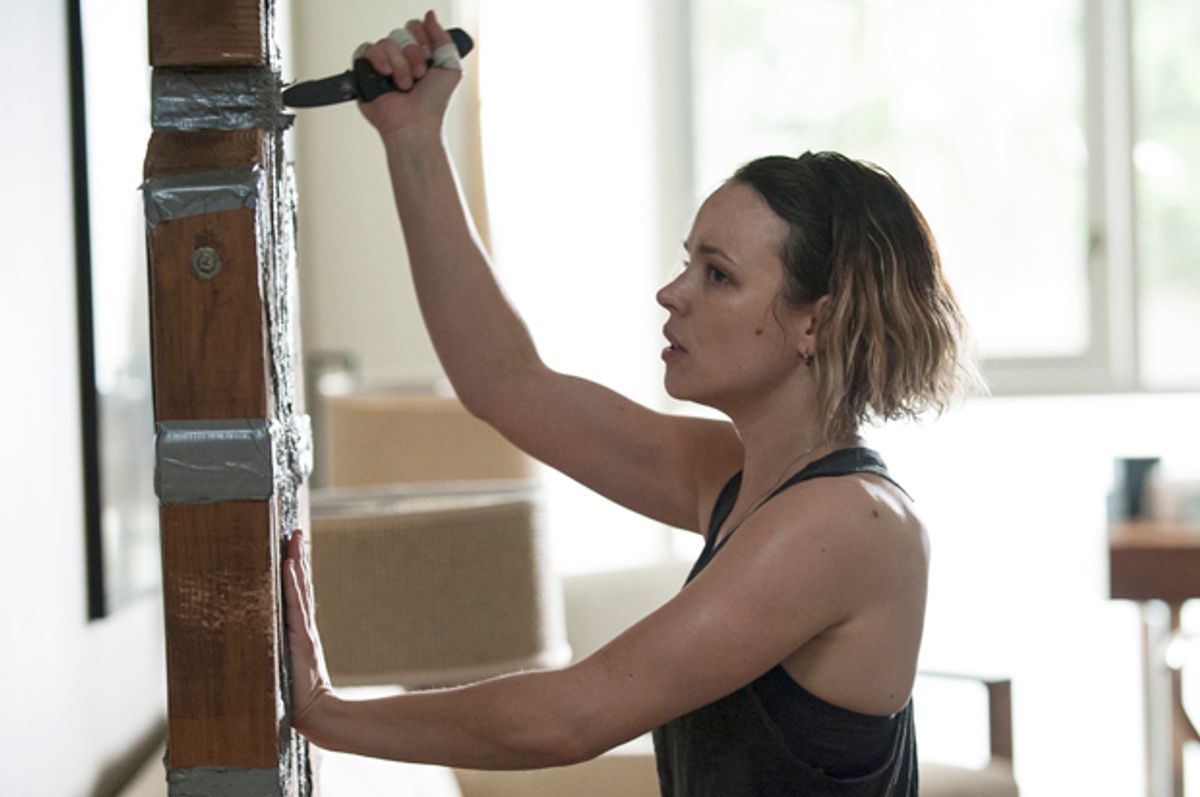 “True Detective” Season 2 may not be much of a success, compared to its predecessor. This season’s story is spoken about metatextually rather than with the engaged engrossment of rapt viewers—every episode is analyzed ruthlessly, but little enjoyed. The possible reasons for why this season isn’t as good as last season are numerous and well-discussed: sophomore slump, the loss of Cary Fukunaga’s creative vision, less talented actors, a far less enchanted setting.

But there is a way this season is brilliant, and that is with Rachel McAdams’ Ani Bezzerides. Vince Vaughn’s character, Frank, seems to be the one that creator and showrunner Nic Pizzolatto imbued with all of the circular dialogue and thwarted poesy of last season’s breakout character Rust Cohle, played by Matthew McConaughey. But where Vaughn can’t quite render the convoluted lines given to his character with any kind of grace, McAdams has stepped up to offer unexpected texture to her part, just as McConaughey did with Rust. I haven’t given up hope on “True Detective” just yet, because I think that through Ani, this season is doing something brilliant. Ani is thwarted, impotent, raging, like all of “True Detective’s" heroes—but she’s raging on behalf of all women as much as her own trauma. In a show saturated with masculinity and bogged down by antiheroes, Ani is the hero of the hour.

When her casting was first announced, the character of Ani appeared to be a sad sop tossed to critics of the show who observed the first season’s lack of compelling female characters. Ani is almost a parody of a “strong female character”—a tough cop who toughly toughs out tough situations with toughness. She has little discernible femininity (aside from an inexplicable dye job that is managed so unrealistically that it’s obvious a man wrote the show; how have her roots not grown out after two months?). As Alan Sepinwall observed in his review of the first few episodes, on one hand, it’s great that there’s a female character expressing her identity however she wants to, but on the other hand, it’s kind of troubling if the only female character a male auteur can come up with is just like his male characters, but with boobs. Ani is as damaged and emotionally incompetent and incoherently moralistic and commitment-phobic as her male counterpart, Ray (Colin Farrell); aside from her affection for e-cigarettes and Ray’s distinct inability to keep anything together in the first few episodes, there’s almost nothing to tell them apart.

That changes with the knives. After a brief, silent scene that shows Ani strapping on her weaponry in the police locker room, Ray casually asks her about them. “The fundamental difference between the sexes is that one of them can kill the other with their bare hands. Man of any size lays hands on me, he’s going to bleed out in under a minute.” Ani does not use the term “feminism”; that’s introduced by Ray, who quips, “Well, just so you know, I support feminism, mostly by having body image issues.” Ani cracks a barely perceptible smile.

It’s one of Ray’s more charming moments, but it’s incongruous with what came before. Ray is making a little joke; Ani is outlining the crisis of literally half of humankind. Women are always at the mercy of men, in any situation, in every civilization; it’s only the strength of numbers, culture and empathy that combat them. If those fail—and they often do—women are raped, murdered, beaten, enslaved, almost exclusively at the hands of men. Ani may not be terribly “feminine,” according to our social definition of the word, but in terms of the fear and anger that is part of her lived reality, she is as female as any woman who has lived in the world. This is the horrible inequality baked into our world, one that must be stumblingly and painfully taught to every successive generation of girls. Except in the slimmest of alternate scenarios, you will always be the weaker one, the more vulnerable one. Unless, perhaps, you carry a lot of knives.

The word “vagina” means “sheath.” It comes, like so much, from Latin, except that the Romans didn’t use it to refer to any part of human anatomy. “Vagina” was a scabbard, or a husk; the female sexual organs were instead the vulva or the pudenda (a word indicating, “thing to be ashamed of”). In the 1680s, medical texts began referring to the birth canal as the “vagina,” and so it is still called today. “Penis,” meanwhile, comes from the Latin for “tail,” but the Romans started using it to mean the other thing often enough that we can trace “penis” to Cicero. Considering that “vagina” limits the female sex organs to merely a receptacle for the penis—and, indeed, does not include the clitoris—“vagina” is a usage that is the subject of some debate among feminist intellectuals. The word “cunt”—which has existed since at least 1230, but only began being used as a derogatory term in the 1920s—has been suggested as a substitute (if only because the denizens of the British Isles use it constantly) and has been repurposed in fascinating ways by various female music artists in the U.S. and writers like Inga Muscio.

But it is still the most profane word in our language. (And one directed at Ani in the third episode of “True Detective.”) The options are to be a receptacle, embody something profane, or be reduced to an animal (“pussy”). Perhaps the only honest English term for female sex organs is “gash”; being female is a wound that never heals.

It is true this season as it was last season that “True Detective” hiccups and falters around femininity. Alanna Schubach at Jacobin sums up a lot of the show’s mixed messaging around women’s bodies and livelihoods as muddled writing, and especially this season, that sounds right to me. The most frustrating strain is this subplot around a ring of prostitutes, called not women but “girls” by the bickering police. A few of them have been given names and voices, but there’s a strange lack of framing and dialogue around them, as if rich men requiring prostitutes is just another casual fact of the world, like wallpaper requiring glue and cars requiring gasoline. In the pulpy, noir-ish world that “True Detective” is pulling from, women were either “pure” or “fallen.” In the world “True Detective” is actually in, it’s a little more complicated—some women are pressed into sexual slavery, but some, like Ani’s sister Athena, choose some version of it in order to make the broken system briefly work for them.

In Sunday’s episode “Church in Ruins,” this season will finally confront this subplot; Ani will go undercover into Frank’s club, posing as one of these girls because she is a girl herself. To be sure, there’s an interpretation of this that is frustrating—must every woman in the show adopt the guise of a whore in order to pass muster? But my reaction was entirely one of excitement. This is the romance of “True Detective’s" first season, which pushed its mundane characters into situations where they had to grapple with the meaning of their own existence. Ani will go undercover as a sheath armed with knives; in a world where women can be bought, sold, traded and rented, she can make any man who lays hands on her bleed out in under a minute.

I don’t know if Ani will succeed at being the story’s hero (and by extension, our own hero). It’s a risky mission, and even if she were to survive, how many people could she actually save? Just because she wants to be hero doesn’t mean she will be one. Ray, Frank and Paul might reject her as their warrior; the fans might, come to think of it.

But it is so satisfying to see a character in an uber-male world stating the facts, for once, about what it means to be female. That walking in the world as a woman is quite different from walking in it as a man, whether that’s down the block to the bodega or hitchhiking to Peru; that being a woman in the world of crime is far riskier than being a man in the same place. Fiction is populated with “strong female characters” doing badass things—“Agent Carter’s" Peggy, “The Lord of the Rings’” Eowyn, “The Matrix’s" Trinity—but few stories take the time to acknowledge the fact underneath the story; being a female hero is quite different from being a male one. The threats are different; the attacks come from different angles. And the way you fight back might have to be another way entirely.

Maybe that’s the final thing that’s notable about Ani. Where other women might opt for non-physical talents in order to feel secure, she goes (literally and figuratively) for the jugular; she is insistent on finding the source of her own fear and rooting it out. She has the hangups of someone who has been through a lot of trauma, and the murmurings about her childhood on the commune underscore that. The show has had little time for her demons, though. It’s focused on Ray’s, Paul’s and even Frank’s more. But you get the sense that’s because Ani has too much to do.

Ani’s namesake Antigone was the daughter of incest, between her father Oedipus and his mother, Jocasta, who was, of course, also her mother. In the Sophocles play, though, she is preoccupied less with this and more with what she perceives to be her filial and familial duty: properly burying her brother, Polynices. The forward motion of the plot has no time for Antigone’s soul-searching about her own trauma, if she has any; she’s instead called to action, and dies trying to do what she thinks is right.

Still, she dies a hero.