Pope Francis is not a feminist: Why Catholicism's liberal icon falls far short on women's issues

The Argentinian pontiff has earned plaudits from the left. Don't be fooled by the hype 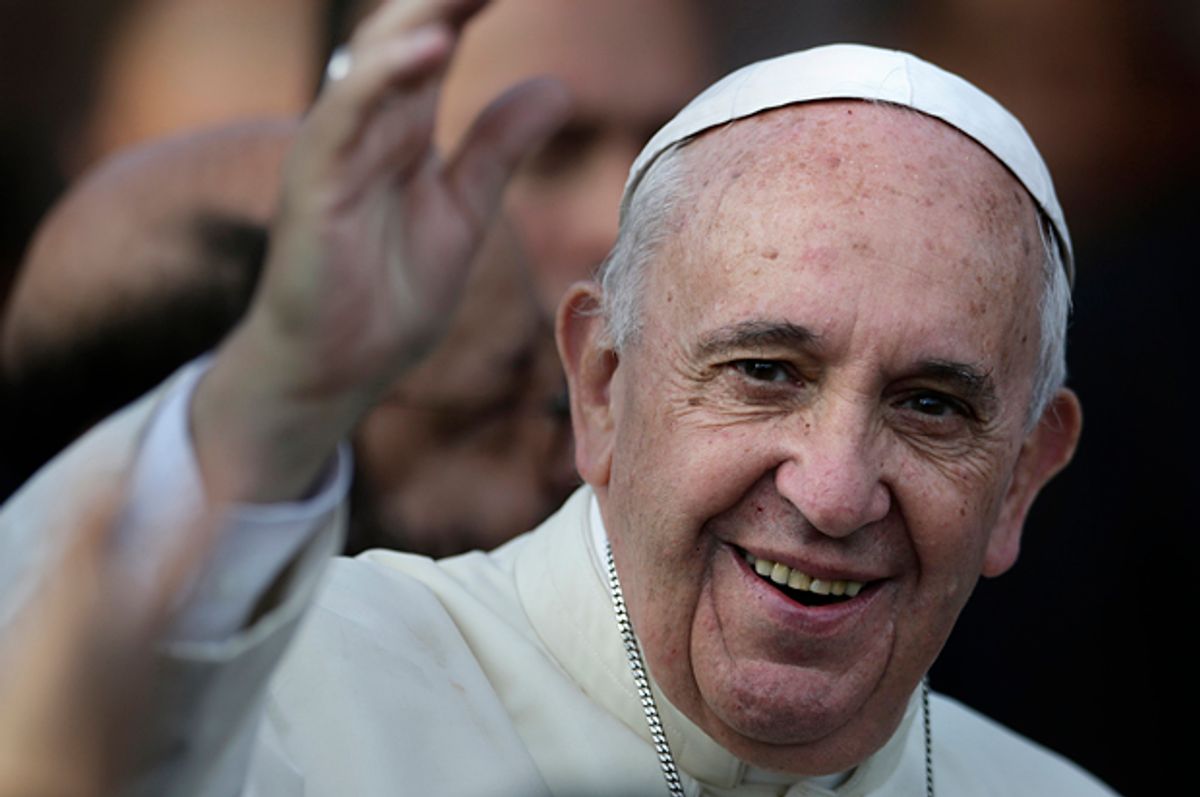 Though Francis's popularity among conservatives has nosedived of late, his ratings among liberals remain sky-high. Liberal journalists seem the most enamored of all. For the past two years, they’ve produced a steady stream of gushing tributes to Francis, praising him as “visionary,” a “flaming liberal”  and even “radical.”  Just last week, Naomi Klein wrote a glowing encomium to Francis for his encyclical on climate change--without once mentioning that one of the most powerful tools for reducing our carbon footprint is birth control, which Francis opposes. Also the last week, the New Republic’s Elizabeth Stoker Bruenig penned yet another valentine to the man, this time praising “Francis’s feminism.”

Wait—what? Pope Francis, feminist? In what sense is Francis—a man who presides over one of the most deeply patriarchal institutions in human history, which bans women from positions of authority and restricts them to subservient roles; who preaches a doctrine of “separate spheres” for women that reads like a musty Victorian-era relic; and whose unwavering support of Catholic doctrine on abortion and birth control is responsible for the death and suffering of countless women across the globe—a feminist? To label Francis a “feminist” is downright Orwellian. It twists the meaning of the word beyond all recognition.

There’s plenty wrong with the piece, including its hilariously awkward subhead: “He’s no Amy Schumer, but that’s okay.” (Ah, if only he were!) Let’s start with a subject that Bruenig, who identifies as a feminist and a woman of the left, should care about: poor women. Bruenig misleadingly claims that the ideas about family planning Francis expresses in his climate change encyclical are consistent with feminism. Yet neither that nor any other Vatican document supports key feminist goals such as a woman-centered, rights-based approach to contraception. Bruenig also recycles the Catholic canard that making birth control freely available to those who want it is a form of oppressive “population control.”

But as the World Health Organization (WHO) has reported, an estimated 225 million women in developing countries would like to prevent pregnancy but are not using birth control, for reasons that include lack of access and religious prohibitions against contraceptive use. WHO and other organizations have found that in developing countries, lack of contraceptive access is associated with significantly elevated rates of AIDS/HIV, as well as some 290,000 pregnancy-related deaths each year. Bruenig’s data-free piece does not engage with this tragic reality.

Bruenig also lauds Francis for his statements condemning capitalism and global poverty and championing economic justice. I agree that Francis’ comments on these subjects have been moving and powerful, and may even end up doing real good. Yet Bruenig seems unaware that one of the keys to reducing global poverty and promoting economic development is strengthening women’s agency—including their reproductive agency.

A vast literature exists on this subject, including work by Nobel Prize-winning economist Amartya Sen. Expanded reproductive freedom for women is associated with significantly reduced poverty, in part because it enables women to pursue education and paid employment. Additionally, children from smaller families stay in school longer. As Adele Stan wrote, if Francis “really wanted to help the poor, he’d be a feminist.” Claiming you want to end poverty but failing to support reproductive rights makes about as much sense as claiming you support low-income workers while opposing the minimum wage.

Bruenig pits the controversy over Francis as being between traditionalist Catholics on the one hand, and “secular, liberal feminists” on the other. Left out of this pat formulation is a rather large and important group: Catholic feminists. Bruenig treats them as if they don’t exist. In doing so, she erases a rich, vibrant tradition that includes theologians like Sister Elizabeth Johnson, public intellectuals like Mary Gordon, organizations like Catholics for Choice, and the Catholic feminists who write for important publications such as Religion Dispatches and the National Catholic Reporter.

Most inexplicably of all, Bruenig dismisses the growing number of Catholics who dissent from official teachings and are working for change within the Church. According to an international survey of the world’s Catholics, large majorities of the faithful oppose Church teachings on divorce, abortion and birth control, and half support allowing priests to marry. In the U.S., significant majorities also support women priests and same-sex marriage. In the Catholic Church both in the U.S. and around the world, strict traditionalists are a distinct minority.

No one expects Francis to single-handedly reverse long-standing Church teachings overnight. Even so, there are a number of smaller steps Francis could take; Angela Bonavoglia mentions some of them here. To her list I would add opening up official Church dialogues on subjects like contraception, abortion and women’s ordination. Sadly, no such dialogues currently exist, and Francis had made it clear that the “door is closed” on women’s ordination. As for birth control, Francis has advised women not to breed “like rabbits.”

Bruenig and other traditionalists insist that Francis has little power to change anything. On the contrary, Church doctrine is hardly set in stone. The Church did not officially declare abortion to be murder until 1869 (previously, early term abortions were considered a venial, not mortal, sin). In the '60s, the ban on birth control was very nearly overturned by an official Vatican committee—until Pope Paul VI chose to reject their findings. Even the key Catholic doctrine of Mary’s Immaculate Conception did not become official dogma until the 19th century.

What is perhaps most peculiar about Bruenig’s piece is her static, essentialist, ahistorical notion of the Catholic Church. Catholic converts like Bruenig (and also Ross Douthat) often write as if the Church is little more than a set of authoritarian teachings handed down from on high. But cradle Catholics intuitively know otherwise.

The Church is not its hierarchy. Rather, the Catholic Church, as Vatican II defined it, is “the people of God.” In other words, it is the parishioners who fill the pews every Sunday; who staff the parish council, organize the bake sales, and pass the collection plate; who serve as lectors, Sunday school teachers and eucharistic ministers; and who are baptized, married and buried under the auspices of “the one holy apostolic Catholic church.” Those people, and particularly the female half of those people, are becoming increasingly restive over the Church’s brutal, reactionary teachings about women’s bodies and souls—dogma that has cost untold millions of women their lives.

It’s long past time for Francis to start listening to his Church—and for his fans on the left to stop defending the indefensible.