The religious have gone insane: The separation of church and state -- and Scalia from his mind 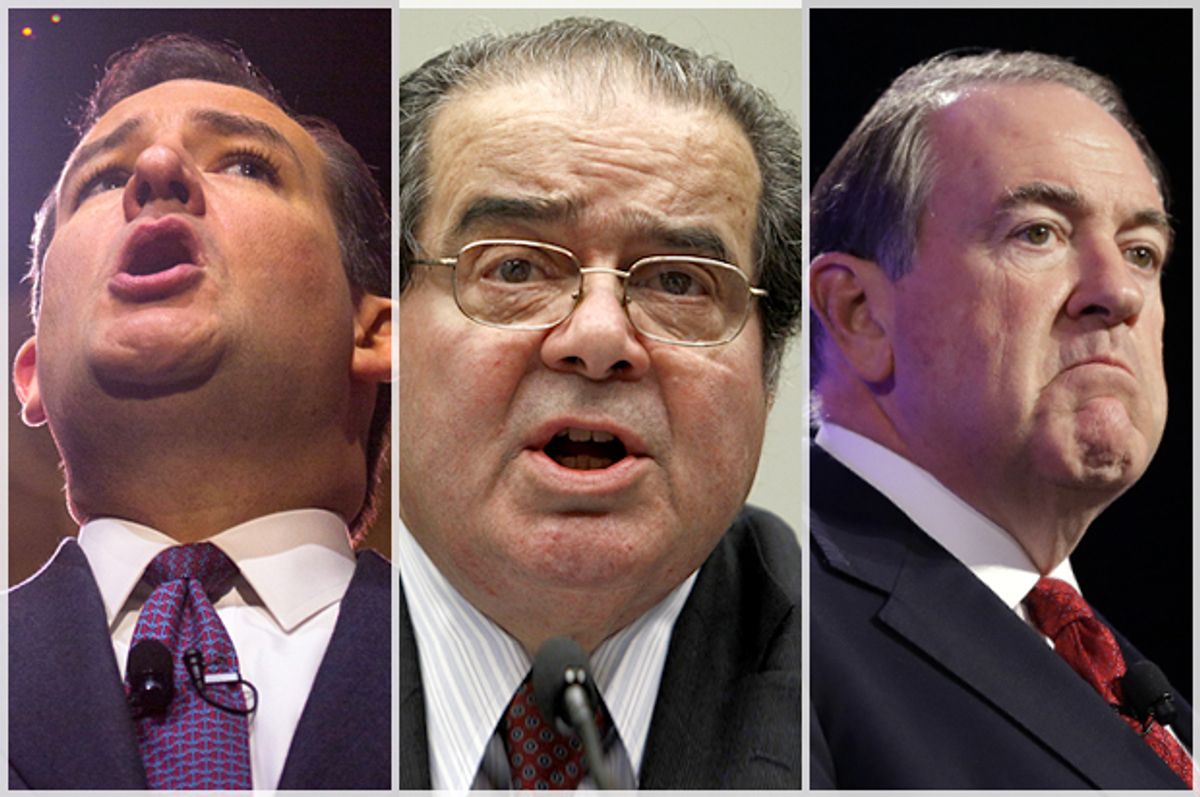 The headline on the News Nerd was almost too good to be true: “American Psychological Association to Classify Belief in God As a Mental Illness.”  A study, the story beneath it read, had led the APA to conclude that “a strong and passionate belief in a deity or higher power, to the point where it impairs one’s ability to make conscientious decisions about common sense matters, will now be classified as a mental illness.”  Faith’s recurrent lethality was adduced: “Every year thousands of people die after refusing life-saving treatment on religious grounds.”  Jehovah’s Witnesses, for example, said the article, refuse lifesaving transfusions (on account of biblical prohibitions against the drinking of blood).

Most gratifyingly, for a rationalist, the author quoted a certain Dr. Lillian Andrews, who opined that, “Religious belief and the angry God phenomenon has caused chaos, destruction, death, and wars for centuries.  The time for evolving into a modern society and classifying these archaic beliefs as a mental disorder has been long overdue.”

Finally, I thought, the educated elite is beginning to awaken to the threat that accepting, without evidence, the truth of comprehensive propositions about our cosmos (that is, religion, in all its inglorious  permutations), poses to the mental health of our society!

A “strong and passionate belief” in a (nonexistent) God does our world immeasurable harm: look no further than ISIS or al-Qaida.  In fact, look no further than the damage religion causes to progressive causes of every sort (and thus to our psychological well-being) in the United States, from women’s reproductive rights to same-sex marriage to teaching science in schools to depriving federal coffers of $82.5 billion a year (in tax exemptions).  Consider the enrichment of all sorts of faith-charlatans who thrive off the gullibility of millions of Americans.  Recall the sick “purity movements” that allow meddlesome parents to ruin the lives of their daughters.

I could go on.  In any case, it was to be expected that sooner or later psychologists would catch on to the quasi-psychotic elements (including detachment from reality, belief in spirits, hearing “the voice of the Lord, and so on) inherent in religion.

But no!  I was wrong!  The fine-print disclaimer at the foot of the News Nerd’s page ruthlessly dispelled my elation: The story, like the others the site publishes, was “for entertainment purposes only,” and “purely satirical.”  In other words, a spoof.  The hour was not nigh; psychologists were not yet ready to diagnose firm belief in God as what it is: an unhealthy delusion.  Men in white jumpsuits won’t be forcing the faithful into straightjackets any time soon.

(Yet would that it were so!  Imagine, so many Supreme Court justices and Republican politicians, from Antonin Scalia to Mike Huckabee and Rick Santorum, disqualified in one fell swoop on mental health grounds from holding public office!)

In fact, religion, so potentially dangerous that the Founding Fathers established a “wall of separation” to keep it clear of our affairs of state, continues to enjoy an entirely unmerited imprimatur of respectability.  Yet the satire in the News Nerd’s piece derives its efficacy from an obvious truth: belief in a deity motivates people to behave in all sorts of ways -- some childish and pathetic, others harmful, a few outright criminal -- most of which, to the nonbeliever at least, mimic symptoms of an all-encompassing mental illness, if of widely varying severity.

Why childish?  A majority of adults in one of the most developed countries on Earth believe, in all seriousness, that an invisible, inaudible, undetectable “father” exercises parental supervision over them, protecting them from evil (except when he doesn’t), and, for the mere price of surrendering their faculty of reason and behaving in ways spelled out in various magic books, will ensure their postmortem survival.  Wishful thinking characterizes childhood, yes, but, where the religious are concerned, not only.  That is childish.

True, belief, say the polls, is waning, but that it persists at all, given the advances of science in the past couple of centuries, and especially since Darwin published “The Origin of Species” in 1859, does nothing if not lead a rationalist to despair.  Americans, by and large, cling to their religion (and, yes, their guns).  To have all the resources to begin reliably fathoming the mysteries of the universe, and yet to cast them aside for slavish fidelity to primitive fables (most of which deserve no more “reverence” than tales from the Brothers Grimm) that no one past the age of six or seven should believe . . .   well, such is the very definition of pathetic.

Harmful?  Let’s leave aside the mass-market megachurch “God of Love” finding little or no textual support in the Old or New Testament, and take the terrifying deity as the sacred canon depicts Him.  One Bible verse alone (Nahum 1:2) describes Him as vengeful, jealous, wrathful, and furious. Or let’s take His supposedly more clement son, who orders us (says Matthew 25:41) cast into everlasting hellfire for trivial transgressions.  Who benefits from the misconception that a permanent, inescapable, unimpeachable tyrant oversees our thoughts and deeds, including those of a most intimate nature?  The life- and society-damaging neuroses generated by this crazed delusion afflict many of those around us.  That is harmful.

But the harm is greater than that.  All in all, the most pernicious constellation of rubbish misbeliefs forming the core of the Abrahamic faiths concerns women, blamed for sin itself (the “original sin”), and the Fall of all mankind.  Every mainstream misogynistic superstition stems from the rotten old myth of Genesis: woman as made not in God’s image, but from one of Adam’s spare parts, and thus inferior to man.  Woman as temptress, woman as unreliable, woman as “unclean.”  The rest of the Old and New Testaments inculcate an array of injurious ideas: that women depreciate after their initial sexual encounter, and serve only to bear children and satisfy the lust of their mates.  That they must submit to their husbands “as unto the Lord,” keep silent in church, cover their (shameful) bodies and heads, and never have authority over men.  It goes without saying that none of this fosters mental health.

Religion as child abuse has, of course, always formed the mainstay of faith.  A desire to indoctrinate the unsuspecting young in faith’s dark, lurid dogmas before science, reason, and the enlightening joys of secularism take over and help them mature into healthy adults has for decades motivated a controversial homeschooling movement afflicting some 2.5 million children in the United States.  (This is an overwhelmingly American movement.  Even in Europe’s more religious southern countries, the stultifying phenomenon is almost unheard-of.)  The damage, in the form of depression, scarred psyches, lost childhoods, ignorance, and even death is increasingly well-known (see, for example, here for an excellent overview); and there is now even an association helping its victims recover.

Homeschooling amounts to allowing the faith-deranged to infect their young with their disorder.  But it covers only the academic year.  Summertime, some of those same faith-deranged foist the God delusion on their defenseless children via a noxious plethora of “Bible camps.”  For a shocking look inside this perverted institution, check out the masterly (if enraging) 2006 documentary “Jesus Camp,” which you can watch here.  (Many thanks to Femen in France leader Inna Shevchenko for recommending this.)

“Jesus Camp” shows children at the gruesomely named North Dakota camp “Kids on Fire” suffering through a miasma of brainwashing involving the abusive instillation of fear, self-loathing, and guilt, an incitement to al-Qaida-style martyrdom for the sake of Christ, and, as if all that weren’t bad enough, even a cameo by the disgraced George W. Bush-confidant and evangelical pastor Ted Haggard.  The searing documentary exercised a salutary effect on the “Kids on Fire” camp, which is to say, it led to its demise.  Unfortunately, there are plenty of others like it.

Criminal behavior springing from religious motives accounts for the increasingly bloody, tragic conflicts spreading across the globe.  The macabre atrocities of ISIS and Boko Haram hardly require description here.  Suffice it to say that religion is the chief motivator of terrorism the world over.  Apologists can rant themselves red in the face trying to ascribe such crimes to anything but faith, but the truth is, any Islamic fundamentalist can claim, with irrefutable textual justification, to be acting in accordance with “holy writ.”

Terrorism aside, though, faith’s role in the death of its own votaries could well serve as sufficient evidence for classifying strongly-held religious convictions as symptomatic of a possibly homicidal mens rea (criminal intent).  Here the courts have proved complicit, aided by our prevailing custom of exculpating religion and deferring to the religious.  Examples abound, but few are more disturbing than those offered by the oxymoronically named cult of Christian Science, which denies the existence of physical ailments (and so discourages medical care) and preaches prayer as a panacea.  To wit: in 1967, little Lisa Sheridan of Cape Cod, Massachusetts, fell ill with pneumonia.  Her Christian Science parents did what all good Christian Scientists do when their child sickens horrifically: nothing at all (except pray).  Lisa’s subsequent death brought about her parents’ conviction on manslaughter charges.

Fed up with being prosecuted for killing their own children, Christian Scientists militated, with some success, for the de-criminalization of their faith-actuated child abuse.  “My religion made me do it” is now a line of defense that may well exonerate felonious parents from charges relating to their offspring’s demise.  (For a shocking, even heartbreaking exploration of this issue and much more, check out Jerry Coyne’s “Faith vs. Fact: Why Science and Religion are Incompatible”, which could be a primer for all rationalists wishing to argue the case for nonbelief.)  Many other, mostly Christian fundamentalist, sects likewise reject science and risk the lives of their adherents.

Yet all is not lost!  If the News Nerd’s APA story was a hoax, professionals are, nonetheless, taking note of the danger it was parodying.  A San-Franciscan human development consultant named Dr. Marlene Winell, herself a survivor of a Pentecostal upbringing, has bruited the idea of “religious trauma syndrome” and established its symptoms as “anxiety . . . depression, cognitive difficulties, and problems with social functioning.”  Kathleen Taylor, an Oxford neuroscientist, has proposed treating religious fundamentalism itself as a “mental disturbance.”

The cure, in my view?  Talk therapy, otherwise known as free speech, focusing relentlessly on religion and its multitudinous, multiplying ills, to be administered by us to the faith-deranged.  Treatment might begin in language they can readily understand.  The best, most succinct notion to be transmitted to the patients: “The deepest sin against the human mind is to believe things without evidence.”  The nineteenth-century British biologist Thomas H. Huxley, “Darwin’s Bulldog,” said that.

It’s up to us.  For the sake of humanity’s future, for the sake of our children, rationalists need to be unabashedly “bulldoggish.”

The time has arrived to bark, and even to bite.