Because black lives shouldn't only matter after they've been taken 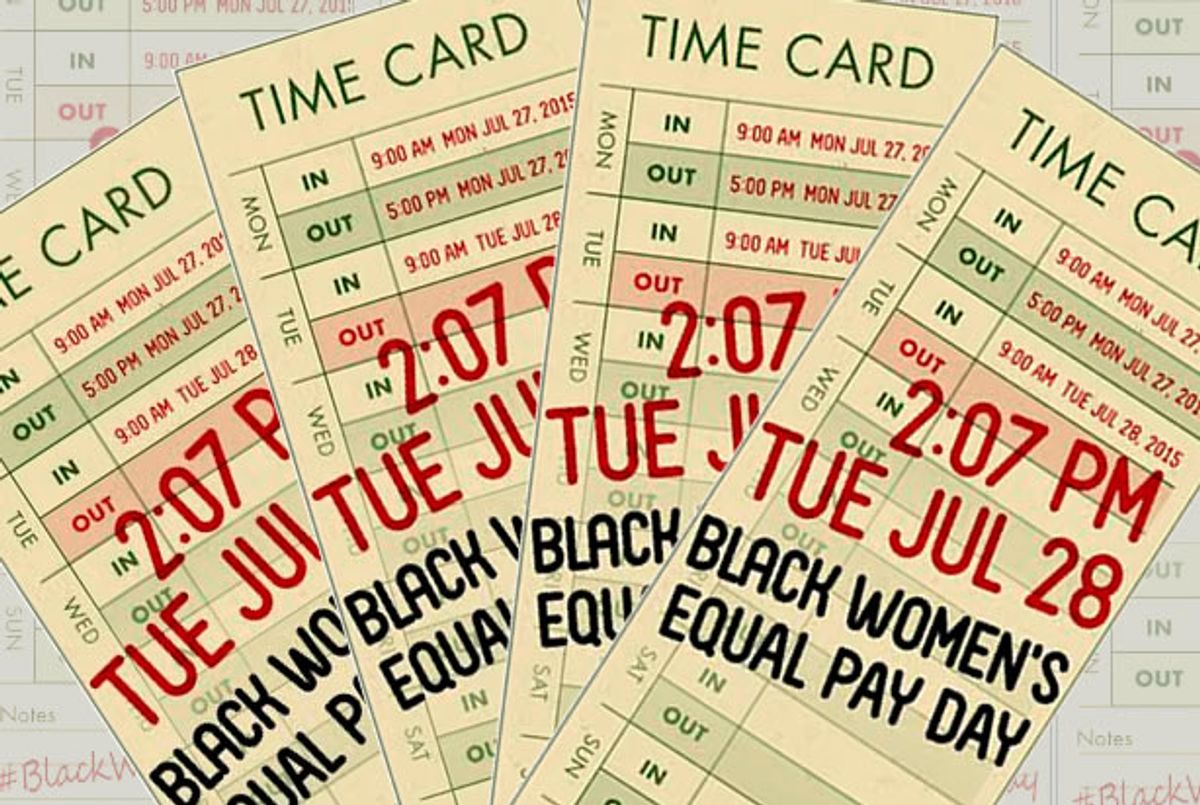 An Atlanta group is leading a national coalition of progressive organizations in urging employees to symbolically clock out of work at 2:07 p.m. on Tuesday, July 28th in order to help bring attention to the wage gap faced by black women in the workplace.

Both the time and the date of the clock out are significant, according to Atlanta Women for Equality (AWE) Executive Director Lisa Anderson. Black women only make $0.64 for every dollar earned by white men, and 2:07 p.m. is approximately 64 percent of an average workday -- which is when a black woman could leave work if she were paid the same as her white peers. For a black woman to earn the same income as her white male counterparts in 2014, she would need to work an extra 208 into 2015 -- or July 28, 2015, which just happens to be tomorrow.

The wage gap between black women and white men demonstrates why both Hillary Clinton and Bernie Sanders have sought to link the issues of racial injustice and economic inequity in the past week -- both have a significant impact on black lives, which shouldn't only matter after they've been taken. As Clinton said, "Black Lives Matter" shouldn't be "just a slogan, it should be a guiding principle."

AWE hopes to further that principle by asking participants to download a printable time card and post a picture of themselves holding it on social media. The idea is generate conversations about the wage gap both on AWE's Facebook, Pinterest, and Instagram accounts and social media at large using the hashtags #BlackWomenEqualPay and #ClockOut4EqualPay.

AWE's executive director, Lisa Anderson, said in an email to Salon that she became interested in the issues of wage inequality and employment discrimination after learning how vulnerable workers in the Atlanta area are in discrimination cases. According the Atlanta law firm Barrett and Farahany, 80 percent of cases brought under Title VII of the Civil Rights Act of 1964 in the city are thrown out judges -- meaning that the plaintiffs never have the chance to take their case before juries, which are much more likely to side with employees over employers.

Because the majority of those filing Title VII discrimination claims are poor, they typically lack the funds to acquire adequate representation in the first place. AWE was founded to assist in cases like this, Anderson told Salon via email, and Black Women's Equality Pay Day is a part of that effort.

"I never used to believe in lawsuits," Anderson wrote, "but I learned the hard way just how rampant gender discrimination of all forms is in our workplaces and schools, how difficult it is to make institutions to stop sexual misconduct, how swift and devastating retaliation can be, and how much of a mess your life can be when you suddenly wake up to a wicked case of PTSD, an administrative obstacle course, and a gazillion other resulting difficulties you never imagined could happen."

However, she added, "I also learned what an extraordinarily empowering impact legal aid can have on the lives of people like me, why suits for monetary damages are sometimes an effective way to protect others from sexual violation, and why legal action is one of the most crucial parts of the larger fight for women’s rights."