And, as if this show isn't confusing enough, the detectives have a new lead: chasing down 2 orphans of the LA riots 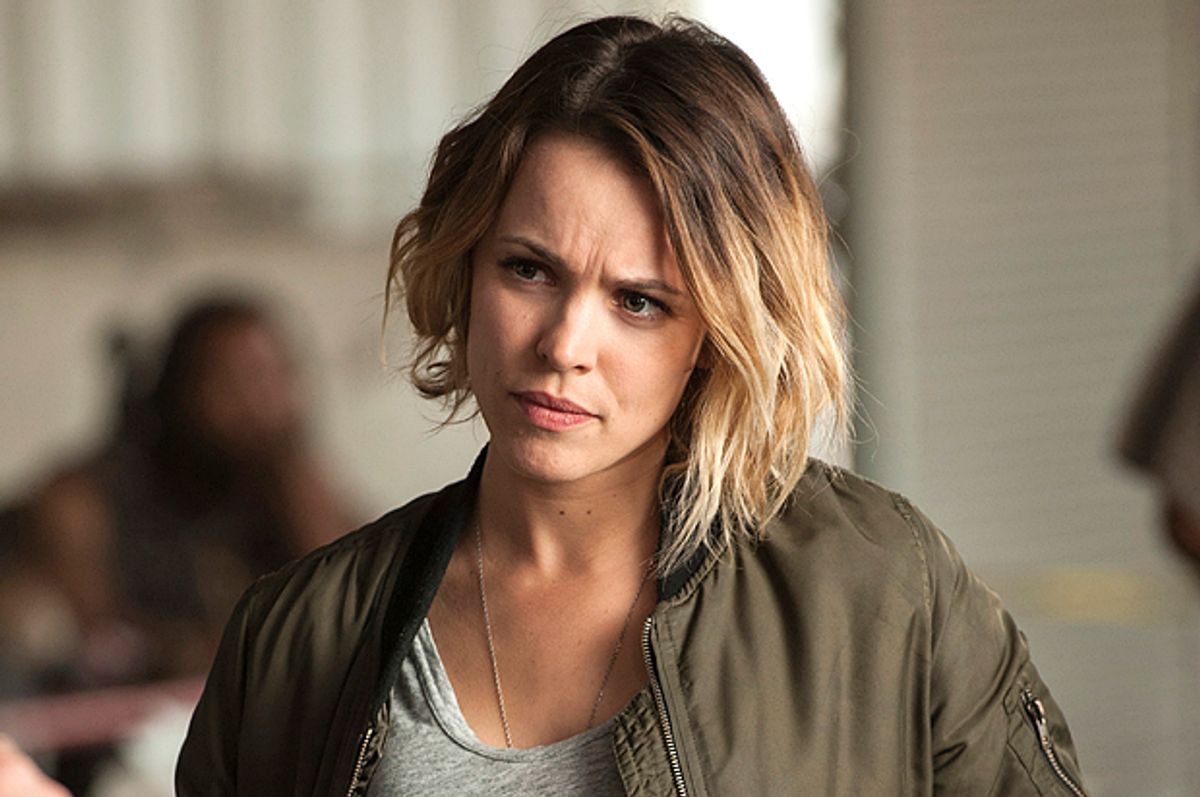 “Church in Ruins” is an episode of “True Detective” that made me wonder how many times we’re supposed to watch an episode in order to understand what the hell is going on. Pajiba’s Dustin Rowles has a post called “Who the Hell Is Stan" on ‘True Detective’” that well encapsulates my point: A character we saw for just a few short flashes is killed and lengthily mourned, to the viewing audience’s incredible confusion. In this episode, Frank and Jordan go to Stan’s widow’s house to pay their respects and hand over some cash; Frank tells a boy he’s golden, or has gold in him, or some other laudatory bullshit. Paul meets with an ex-cop about two children who might have been connected to the diamonds but were definitely connected to the L.A. riots. There’s a chair covered with blood in a cabin in the woods. Frank is looking for a woman for some reason, and ends up getting her killed by a gang that shakes him down in the process. You are a better viewer than I if you could keep all those threads straight; if you were able to understand, in one pass, why we were watching everything “True Detective” was throwing at us.

This is an episode of “True Detective” that felt the most like it drew a coherent story arc, which in some ways made the ending quite satisfying. It went for a big finish—going into the mission, and then having it end with a black, speeding car racing through a dark canyon, our heroes under the cover of shadow, and successful, to boot. An electric guitar riff starts up and accompanies them as they fishtail a hard left and Ray switches the headlights back on. It’s triumphant. It’s sexy. It would not be out of place in the final panel of an issue of a comic book. The scene even takes place in an American car, making the moment evoke some kind of hybrid between a “Fast and Furious” film and a western.

And yet it felt so stupidly silly. For all the nuance and complexity that the show aspires to, or pretends to aspire to, the nuances in this episode either hit the viewer like a train, they’re so obvious, or whizz right by, because they swing and miss so damn hard. Maybe you don’t know why Paul’s got a photo of two kids and he’s showing it to a retired cop, but if there was any doubt whatsoever about why Ani’s got so much trauma, we’ve got a few flashbacks, the look of sick horror on her face, and oh yeah, very enthusiastic scoring in the background that wants to make extremely clear to you just how pained you are supposed to feel.

And even Ani’s drugging seems to borrow from every silly misconception of how drugs work. Maybe the woman next to Ani who told her the spray was molly (a pure form of MDMA, also known as ecstasy) was mistaken. But in that case, the other women at that house were on a really different drug than Ani, because they all seem to be having a great time, which would line up more with molly than something more sedative, like GHB. Annoyingly, Ani’s trip is visually and experientially both really unlike what ecstasy does (according to the National Institute on Drug Abuse: “It produces feelings of increased energy, euphoria, emotional warmth and empathy toward others, and distortions in sensory and time perception”) and also incredibly boring; oh, you’re going to depict an altered state with blurry vision and a flashback? How entirely original! We live in a world where “Mad Men” depicted LSD with incredible clarity of vision and “Breaking Bad” explored heroin’s effects with cinematic gymnastics. We expect better. Never mind that Ani forcing herself to vomit would not rid herself of a drug that was sprayed into her mouth, and would have therefore made it to her bloodstream through her saliva, bypassing the stomach entirely. I know that “True Detective” is fiction, but come on; this is HBO in an era of some of the best television ever made. Surely you can fact-check.

I think that somehow the show just can’t see it—beyond Ani, the sole female character it has pledged to make human. Athena is barely a character, Ray’s ex-wife is alternately shrill and withholding, and Jordan barely gets in a line per episode. Ani’s fear is real, but no one else’s is; her story makes sense, but no one else’s does. And honestly? It doesn’t make that much sense. She goes undercover as a human transponder, so she can get Paul and Ray to the house. There maybe could have been a few other ways to do that, logistically.

It is satisfying that this episode finally took the season in a direction. But I don’t like the direction. Nothing is pushing hard enough against the constraints of this world, whether that’s characters’ values, beliefs or livelihoods. I’m even having trouble locating the wrongdoing—collusion, I suppose, but buried under a whole lot of sex that is potentially transgressive only because prostitution is illegal. I don’t know what the rest of this season will bring, but after a few episodes of filler and a few of promise, “Church in Ruins” is disappointingly sloppy.