Why Bernie Sanders should be the 1 percent's candidate (yes, really)

If America's ultra-rich know what's good for them, they'll start getting behind Sanders' progressive reforms 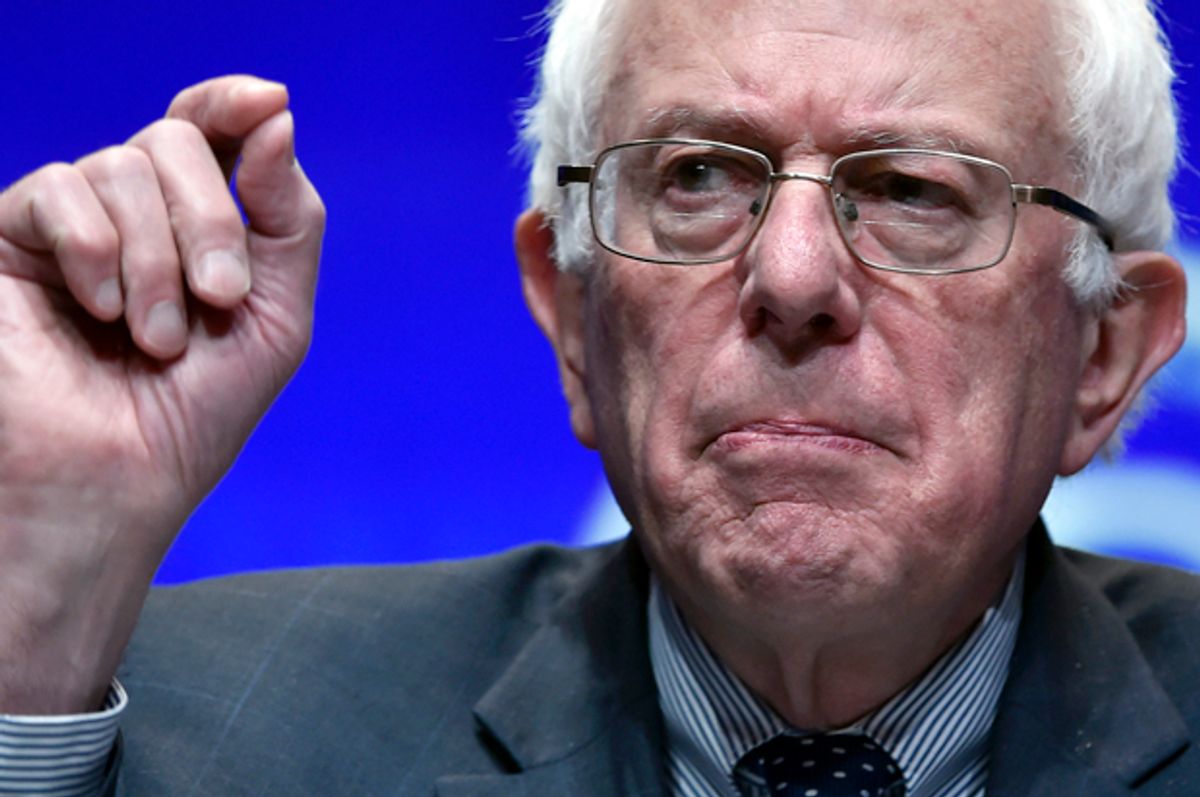 If you are a regular viewer of Fox News, you may think of Bernie Sanders as some kind of radical socialist who wants to bring down the entire capitalist system -- a modern day Lenin or Trotsky. The truth, of course, is that Sanders is neither a socialist nor a radical, or even an anti-capitalist. In the historical scheme of things, Sanders is actually a moderate (based on his policy proposals, at least). And, if they were smart, one percenters may very well want to consider voting for him, if they hope to avoid a truly radical movement in the future.

What do I mean by a truly radical movement? Basically, a movement where the people realize that American democracy is more of an illusion than a reality, and that the political apparatus is heavily rigged to favor the ruling class. A movement where people conclude that filing petitions, writing letters, and attempting to lobby politicians, when up against a global corporation, is largely futile, and that an election between two corporatists just isn't good enough.

Now, this could be far off or not so far off -- writer Chris Hedges believes it is closer than many suspect (although he thinks it could as easily be reactionary as progressive) -- but history does show us that as inequalities increase, class antagonisms increase, and eventually, the status quo crumbles. The modern welfare state was largely founded on mediating these class tensions and preserving the status quo. In fact, the idea of Social Security was not originally introduced by radical leftists, but the staunchly conservative Chancellor of Germany, Otto Von Bismarck, under the German monarchy. Bismarck founded social insurance to “keep the German economy operating at maximum efficiency, and to stave-off calls for more radical socialist alternatives,” according to the Social Security website. Of course, Bismarck was called a socialist for his pragmatism, and responded to the hyperbole with indifference: “Call it socialism or whatever you like. It is the same to me.”

President Franklin Roosevelt similarly introduced New Deal reforms to prevent more radical alternatives from gaining steam, or to "save capitalism from itself." As Roosevelt said in a private letter in the early 1930s:

“No question in my mind that it is time for the country to become fairly radical for at least one generation. History shows us that where this occurs, occasionally, nations are saved from revolutions.”

New Deal reform was fairly radical, but nowhere near the radicalism that the country needed. The financial regulation and social programs were introduced to limit wealth inequalities and economic instability -- two inherent features of capitalism. And indeed, from the New Deal until the last few decades of the 20th century, inequality was reduced and economic crises were limited and controlled through a combination of fiscal and monetary policies.

As the new century approached, however, much of the reform that had been introduced to mediate class tensions was thrown out. The “new economy” of the 21st century didn’t need those regulations and the old welfare programs were thought to induce laziness and fraud (thanks largely to racial propaganda). The Clinton administration helped bury many of the remaining New Deal reforms, further deregulating the financial industry and "reforming" welfare.

The “new economy” was a myth. Capitalism is capitalism, and today, with inequality at pre-Great Depression highs, along with economic instability, the pragmatic move would be to once again become “fairly radical.” Some believe it is time to become truly radical, but that is not what Bernie Sanders is about. Sanders, much like FDR, is a liberal who believes that the government should support all classes, not just the one percent. That is progressive, but not the stuff of revolutions. And, if you need further proof that Sanders is no radical, the fact that he said he will support the Democratic candidate, if he does not get the nod himself, shows that he is ultimately a moderate, working within the party system.

I am not bashing Sanders, who is a voice of reason in a desert of unreason. He is fighting for a more democratic government that actually represents the people. Whether this is achievable in the current political system (which is inherently undemocratic) is doubtful, but to have a fighter like Sanders waking up the people is a very good thing. And what I'm saying is that the extremely wealthy, call them political elites, should not oppose trying to limit inequalities, and instead open up the political system to the people. This would be that pragmatic thing to do. Letting inequality continue to skyrocket is a dangerous route to take. This is one thing that libertarians never seem to understand -- that class tensions are unavoidable, and that an unfettered free market will lead to them, magnify them, over time turn them into something untenable. Try telling a population of poor and hungry people that they should be grateful for their freedom. The freedom to starve is no freedom at all.

Bernie Sanders calls himself a “Democratic Socialist,” but don't let the appearance of the word "socialist" fool you. He advocates policies similar to the governments of Scandinavia, which are not all that more radical than the ideas that flourished during the New Deal. High progressive taxation, a regulated economy, support of labor movements and worker co-ops (which, as I have previously written, could lead to a more radical movement), universal healthcare, etc. These are common sense ideas that would limit the inequalities that have ravaged America.

In the 1 percent's case, supporting policies like universal healthcare is more pragmatic than anything else. If they want to preserve the current political system, which we must assume they do, then reform seems to be a necessary step. Now, would the 1 percent support Sanders for president in 2016? Probably not. The threat of radicalism in America does not seem to be significant enough at the moment. But that could change. If a mass movement, or as Sanders has said, a “political revolution” continues to form, there will be little choice but to support real reform of the American political system. And this is why Sanders’ early success is important. The odds are stacked against him, but the fact that he is attracting huge crowds across America does show that the people are ready for something other than the corporatist status quo. Sanders is just one person, and ultimately it will take the masses to change the corrupt political system of America. How radical should the solutions be? This is up to debate, but what is not is that real change requires more than just an election.