“What I’m going to do to you is going to be f**king disgusting": This could be how Donald Trump ends (UPDATED)

In 1989, a book alleged, Ivana Trump accused her husband of rape. The story might have died but for new thuggery 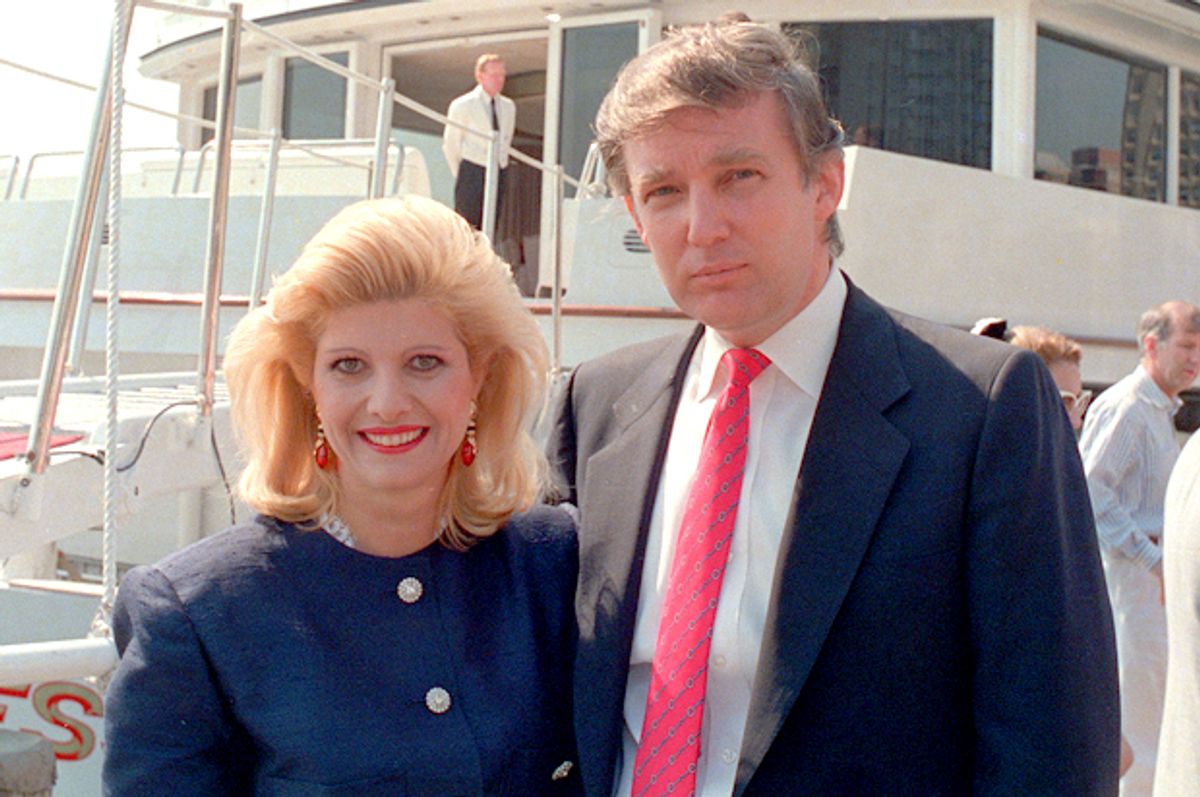 Donald Trump’s lawyer, to use a favorite Trumpism, seems to be kind of a dummy.

As The Daily Beast went to press on a story about a forgotten 1993 biography of Trump, which alleged that his wife Ivana once accused him of brutality and rape, Trump lawyer Michael Cohen let loose a string of such hysterical threats that they might have come from Trump himself.

“You’re talking about the front-runner for the GOP, presidential candidate, as well as private individual who never raped anybody," Cohen told the reporters. "And, of course, understand that by the very definition, you can’t rape your spouse.”

“It is true,” Cohen insisted. “You cannot rape your spouse. And there’s very clear case law.”

Of course, as Cohen presumably knows now, there’s very clear case law that says you can be charged with raping your spouse. The marital rape exception was struck down in New York in 1984, 31 years ago, and five years before Trump’s alleged assault on his then-wife.

But that wasn’t the worst of it.

“I will make sure that you and I meet one day while we’re in the courthouse,” Cohen threatened writers Tim Mak and Brandy Zadrozny, if they reported on the 1993 book “Lost Tycoon: The Many Lives of Donald J. Trump," by Harry Hurt III. “And I will take you for every penny you still don’t have. And I will come after your Daily Beast and everybody else that you possibly know. So I’m warning you, tread very fucking lightly, because what I’m going to do to you is going to be fucking disgusting. You understand me?”

“You write a story that has Mr. Trump’s name in it, with the word ‘rape,’ and I’m going to mess your life up…for as long as you’re on this frickin’ planet…you’re going to have judgments against you, so much money, you’ll never know how to get out from underneath it.”

Once again, just the way some Republicans half-joke that Trump is a plant to make their party look its worst, I found myself thinking Cohen must be a plant to make Trump look his worst. But there’s no evidence of that. Cohen is a Trump loyalist, stepping out today to defend Mike Huckabee for claiming that President Obama’s Iran deal will march Israeli Jews “to the door of the oven.”

"I think what [Huckabee is] really trying to say is we're in a bad place," Cohen told CNN’s Chris Cuomo, noting that he lost family in the Holocaust.

"He's okay with these words? Israelis to the doors of the oven?" Cuomo asked, incredulously.

So Cohen is solid with Trump. But what he did Monday night is make sure that a 22-year-old book, that was chock full of admittedly creepy tidbits chewed over by New York media more than 20 years ago, will be resurrected for Trump’s 2016 presidential run.

A run in which he has become the Republican frontrunner, according to several polls, by the way.

So here are some of the icky details, as laid out by The Daily Beast and drawn from "Lost Tycoon." In 1989, the book reports, Trump had a scalp reduction surgery to remove a bald spot that was performed by his then-wife’s plastic surgeon. Trump, in great pain, was not impressed.

“Your fucking doctor has ruined me!” Trump reportedly told Ivana. Then he came at her in a “violent assault,” the book alleges, pulling out fistfuls of hair from her scalp to recreate the pain he felt during surgery. Then, by all definitions of rape I’m familiar with, he raped her. (I’m leaving out gory details.)

“Ivana is terrified…It is a violent assault,” author Harry Hurt III writes. “According to versions she repeats to some of her closest confidantes, ‘he raped me.’” She made the charge during their divorce proceedings in the early 1990s.

Trump denied the allegations – including the charge that he had scalp reduction surgery. Trademark Trump, he hit the author with insults.

“It’s obviously false,” Trump said about the book’s charges in 1993, as reported by Newsday. “It’s incorrect and done by a guy without much talent…He is a guy that is an unattractive guy who is a vindictive and jealous person.”

It is true that Ivana Trump, perhaps under pressure from her powerful husband, later released a statement clarifying her charges. “During a deposition given by me in connection with my matrimonial case, I stated that my husband had raped me,” her statement read. “[O]n one occasion during 1989, Mr. Trump and I had marital relations in which he behaved very differently toward me than he had during our marriage. As a woman, I felt violated, as the love and tenderness, which he normally exhibited towards me, was absent. I referred to this as a ‘rape,’ but I do not want my words to be interpreted in a literal or criminal sense.”

"Lost Tycoon" included a “Notice to the Reader” which said Ivana’s statement “does not contradict or invalidate any information contained in this book.”

Trump, of course, launched his presidential run by claiming Mexico was sending illegal immigrants who were rapists. So his team is understandably sensitive about claims that his wife once charged him with raping her.

But Trump’s trusty lawyer Cohen made another try to keep the Daily Beast away from the book – he claimed Ivana Trump’s “use of the word rape” only meant “she didn’t feel emotionally satisfied.”

Then he threatened to “ruin” one of the reporter’s lives if the story advanced the rape claim.

It’s customary here to reassure the reader that Donald Trump won’t be the 2016 presidential nominee, let alone our president. And I do believe that. On the other hand, I’m someone who predicted, correctly, that his ugly slurs against John McCain wouldn’t hurt him with a GOP base that hates immigrants and thinks McCain is a sellout RINO. I don’t write off Trump the way many mainstream reporters do.

But I think this story will hurt Trump. The graphic rape details (reportedly known in New York media circles but not nationally) plus his lawyer’s faux-macho threats gave this tale heft. There are Republicans who are genuinely desperate to find a way to derail Trump (after years of building him up and enjoying his birther filth when directed at President Obama.) This gives them a new line of attack.

Still, though I was right about the McCain attack not hurting Trump, I could be wrong about this story taking a toll. It’s always risky to predict the GOP will reject a candidate as too hateful. It hasn’t happened in a long time, and it may not happen in this case either.

Update, 11:20 a.m.: After this piece went live, Trump lawyer Michael Cohen apologized for his remarks to the Daily Beast in a statement provided to CNN.

"As an attorney, husband and father there are many injustices that offend me but nothing more than charges of rape or racism. They hit me at my core. Rarely am I surprised by the press, but the gall of this particular reporter to make such a reprehensible and false allegation against Mr. Trump truly stunned me. In my moment of shock and anger, I made an inarticulate comment - which I do not believe -- and which I apologize for entirely," Cohen said in the statement.

In a separate statement, Ivana Trump claimed that the Daily Beast's report "is totally without merit," based on remarks she made "at a time of very high tension." She added that she believed her ex-husband "would make an incredible president."