"Brokeback Mountain" cast and crew remember Heath Ledger: "One of the greatest actors that has ever been"

Ang Lee, Jake Gyllenhaal, Anne Hathaway and others speak to Out magazine on the film's tenth anniversary 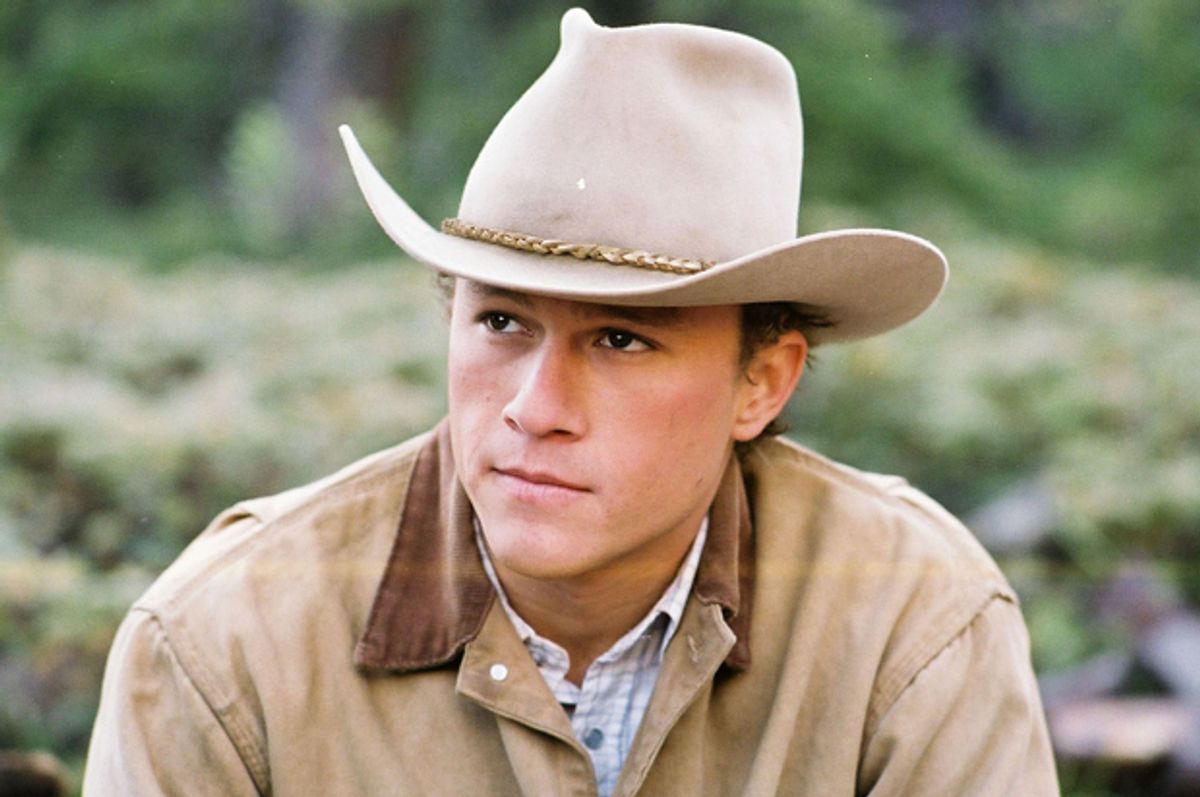 On the tenth anniversary of Ang Lee's pathbreaking gay love story “Brokeback Mountain,” the cast and crew talked to Out magazine about the making of the historic film, as well as sharing memories of the late Heath Ledger, who passed away in 2008.

Everyone recalls Ledger's intense devotion and commitment to the project, with his costar Jake Gyllenhaal explaining that Ledger was unhappy about how the film’s most iconic line — “I wish I knew how to quit you” -- from one if its most wrenching scenes became a popular meme after the film came out.

“He was extraordinarily serious about the political issues surrounding the movie when it came out,” Gyllenhaal explained. “A lot of times people would want to have fun and joke about it, and he was vehement about being serious, to the point where he didn’t really want to hear about anything that was being made fun of.”

On another instance, Ang Lee remembers Ledger getting very upset one day when Gyllenhaal tried to improvise and deviate from some of his lines. "Heath just got really upset—really upset, like his whole progress was disrupted. Jake is more of an improv actor—try this, try that—but Heath’s preparation was really deep. He kept his teeth clenched and his face scrunched up for about two months—he didn’t let go.”

Anne Hathaway recalls the scene where Ennis visits Jack’s parents house as the moment she realized what a brilliant actor he was. "Heath had decided that at some point Ennis had been in an accident and had a limp,” she recalls. "It was so subtle, and it looked like he’d had this limp for about four years, and I just remember looking at Heath in that moment, and thinking, That is one of the greatest actors that has ever been."

The group also reflected on Michelle Williams and Heath Ledger’s relationship, which bloomed during the shoot. Gyllenhaal describes shooting the film as an extremely intimate bonding experience; for the first month of shooting, they lived together in trailers by a river, and became almost like a family. " It’s why we are all still close— not just bonded by the success of the film, but bonded by the experience. It was an intimate project in that way,” he explained. "We’d wake up and make breakfast for each other, and hang out. Heath and Michelle fell in love. It was a really special, special time."

The whole oral history is full of similarly sweet reminiscences -- so go read it in full! -- as all of the film's participants reflect tenderly on the film as a seminal moment in their careers, not to mention a watershed moment in the culture at large. Here's Anne Hathaway, remembering a dinner that she, Williams, Gyllenhaal and Ledger had during the shoot:

"The four of us were taken out to this restaurant in Calgary by the producers, and I remember sitting there and looking at beautiful Heath, and Jake, and Michelle, and it hit me that we were all under 25. It’s funny how recent it was, but at the time we were very far away from this burgeoning humanist moment that we’re having now with gay rights. And it felt like a very big and important step—a statement about love, about the need for love, about the consequences of limiting people. And I was just so blown away that these four 25-year-old kids could bring this to life, especially the three of them."