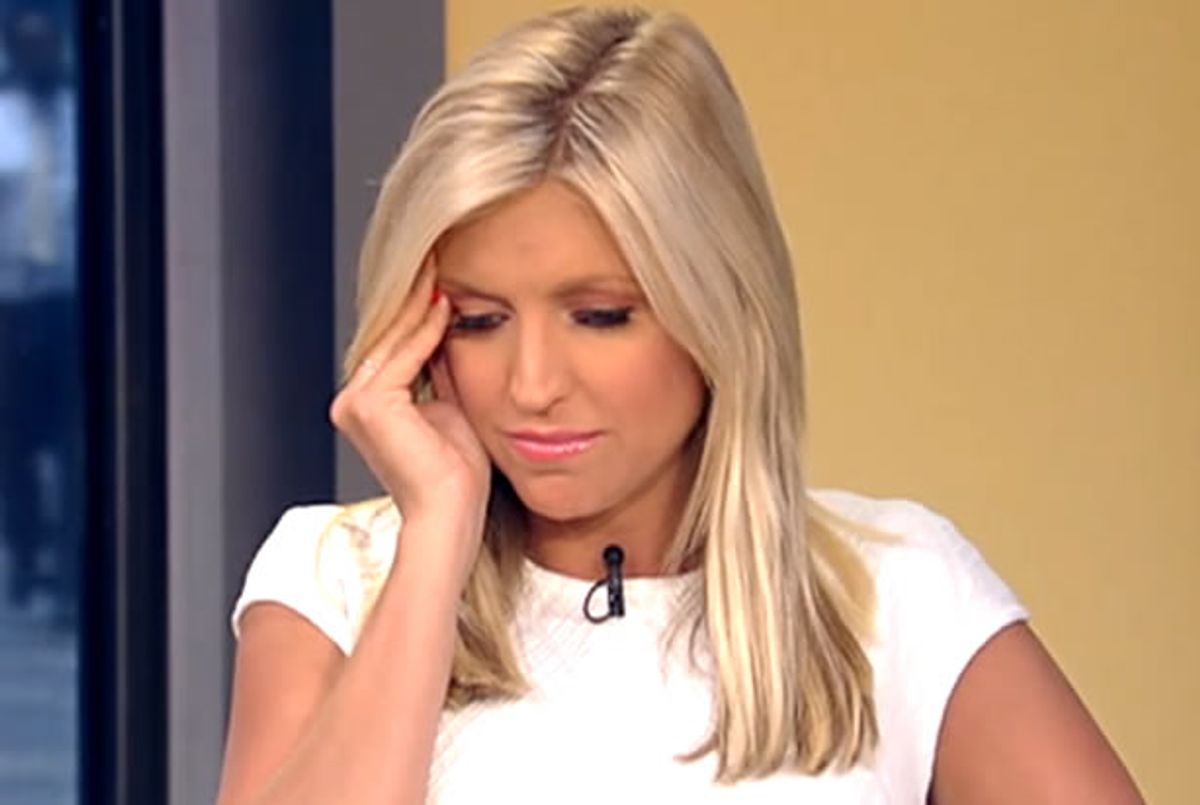 On "Outnumbered" Monday, "the ladies" were discussing Stone County, Missouri Sheriff Doug Rader and his decision to put a banner-like "In God We Trust" bumper sticker on the back of his deputies' police cruisers, but the conversation quickly became too accepting of atheist positions for "Fox & Friends First" host Ainsley Earhardt.

Judge Andrew Napolitano introduced the segment with a clip of Sheriff Rader on Fox News saying that he was "angry" that his department's been singled out for criticism, when "there must be hundreds, thousands of departments" who put giant "In God We Trust" bumper stickers on their patrol cars. "Where's our patriotism?" he asked. "Anytime someone wants to be patriotic and make a symbol these days, they're attacked."

Given that the symbol most people are defending these days isn't just un- so much as anti-patriotic, the nature of the sheriff's complaint feels a bit thin -- except to the majority of the panelists on "Outnumbered," who agree that it's perfectly fine to collapse theistic affirmations into the category of "patriotism" and condemn anyone who doesn't.

"How do you think they purchased those cruisers?" Andrea Tantaros asked. "With Monopoly money?"

"What, God paid for them?" Julie Roginsky replied.

"It says 'In God We Trust' on the money," Tantaros said, as if that fact justified the intrusion of theism into all things economic.

Roginsky replied that she's in the minority on the panel in thinking that "In God We Trust" doesn't belong on currency because it could offend atheists, causing a number of co-hosts to appeal to the bench. "Judge, she's the minority!" at least two of them can be heard repeating.

A fed-up Ainsley Earhardt argued that "the majority of Americans, 77 percent, believe in some sort of God," whereas only "23 percent are atheist or agnostic," which to her mind meant "the majority should win in this case." By way of explanation, she claimed that atheists shouldn't even be offended by the phrase "In God We Trust" because they don't believe in gods.

When Roginsky tried to challenge her, Earhardt yelled, "What about the majority? I'm so tired of protecting the minority! What about the rest of the country?"

Watch the conversation unfold on "Outnumbered" via Media Matters below.