Adam Sandler is finished: Why "Pixels" may be his last gasp of crude misogyny 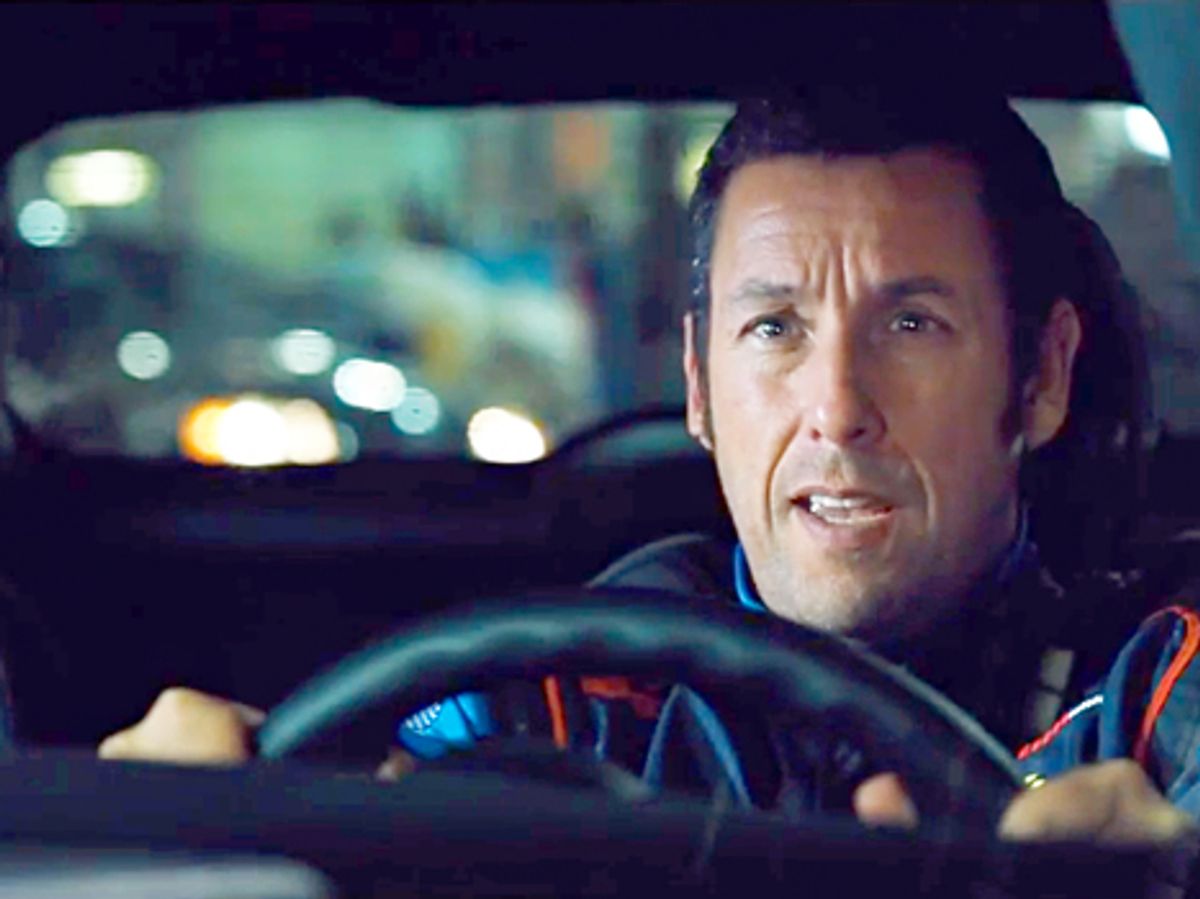 Adam Sandler hates a lot of things—adulthood, aliens, and most of humanity. But his movies have an even bigger issue: the way they treat women.

In June, actress Rose McGowan tweeted a casting call for one of the comedian’s films: “Wardrobe note: Black (or dark) form-fitting tank that shows off cleavage (push-up bras encouraged). And form-fitting leggings or jeans. Nothing white.” And this was just days after a photo from the Hotel Transylvania 2 premiere showed Selena Gomez, who co-stars in the film, dressed to the nines on the red carpet—while Sandler and frequent collaborator Kevin James showed up in baggy shorts.

More from The Daily Dot: "Stephen Hawking and Elon Musk are worried about weapons that think for themselves"

This dichotomy—of sexy girls and the schlubby guys who awkwardly have their arms around them—is everything that’s wrong with his output over the past two decades, and it’s an issue perfectly illustrated by Sandler’s new film, Pixels.

Directed by Chris Columbus (Jumanji), Pixels imagines a world where extraterrestrials find classic video games in a time capsule and misinterpret them as a declaration of war. Sandler, of course, is a former preteen arcade whizkid who has to assemble a team of ragtag nerds (played by James, Josh Gad, and Peter Dinklage) to save the world—just in time to bag hot babes.

Sadly, this isn’t a wisecrack: That really happens. Pixels views women not as humans (or characters with their own arcs) but as prizes awarded to male heroes for acts of valor. While Tony-winner Jane Krakowski barely has two lines as the First Lady to Kevin James’ POTUS (I know, I know), Spring Breakers’ Ashley Benson gets even less to work with as Lady Lisa, a video game character come to humanlike life.

Whereas Weird Science used the man-meets-Frankenstein-woman-of-his-dreams to lightly critique objectification, the aliens let Josh Gad have her as a trophy when the geeks win the war. How does Lady Lisa feel about all this? She feels nothing, because Lady Lisa is all but a literal object.

Lady Lisa never gets a single line, and the screenplay never even settles on whether she’s human or not. In the duo’s Happily Ever After scene, they’re married with children—except that their kids are all baby Q*berts. It’s a cute nod to fans of classic video games but deeply, deeply troubling to everyone else—and kind of disgusting when you think about it.

If Gad had to do something horrible in a past life to end up in this movie, co-star Peter Dinklage’s sins must have been far worse. The Game of Thrones actor plays Eddie (aka “the Fireblaster”), a mullet-clad convict who beat Sandler’s character in a Donkey Kong championship when they were kids. In exchange for joining the war, he has a list of requests, including a) getting out of prison, b) his own island, and c) a threesome with Serena Williams and Martha Stewart. Because a woman’s sexual agency is irrelevant, the pair are only so happy to be two halves of his fantasy sandwich.

Pixels repeatedly shows that all men (even convicts) deserve hot women, and there’s no man more worthy than Adam Sandler himself. He plays Brenner, a low-level tech employee who works for a Geek Squad-esque company. Brenner has whatever the opposite of a “meet cute” moment is with Violet (Michelle Monaghan), whose cheating husband recently asked her for a divorce—and by recently, I mean fifteen minutes before Brenner meets her. While installing her son’s Xbox on a call, he misreads the signals and leans in for a kiss, which is more than a little inappropriate. (Arguably, it also constitutes sexual harassment.)

But, of course, Brenner isn’t the bad guy—she is. He accuses Violet of being a “snob” for not kissing him. Brenner claims that her problem with him is that he’s just a regular guy, instead of a sleazebag who tried to take advantage of a vulnerable single mother whose husband left her (and, I repeat, 15 minutes ago).

However, because it’s an Adam Sandler film, Violet comes to see that Brenner is a charming everyman and a good person, even though that makes no sense for her character. Why does Violet like him? Because Monaghan’s contract says so.

If Michelle Monaghan—a Golden Globe nominee for her work on True Detective—is way, way too good for this, she’s in good company. A slew of A-list and B-list actresses have done their time as “The Girl” in an Adam Sandler film, whose characters are as nondescript as they are virtually interchangeable. Since breaking out with 1995’s Billy Madison, Sandler has bagged Winona Ryder, Fairuza Balk,Marisa Tomei, Joey Lauren Adams, Kate Beckinsale, Katie Holmes, Jessica Biel, Salma Hayek, Jennifer Aniston, Keri Russell, and Drew Barrymore (three times).

This would be a formidable list of eligible women for a star of Brad Pitt, Justin Timberlake, or Johnny Depp’s caliber. After all, the trio were (respectively) married to Aniston, Biel, and Ryder in real life, and next to Sandler’s disheveled, apathetic characters, these women look increasingly like Amazon women beamed in from another planet. In Sandler’s next project, The Do-Over, “The Girl” will be played by Paula Patton.

Who is “The Girl?” On top of being A-list pretty, she’s completely available—and all but unquestioning. If Roger Ebert once described the Adam Sandler character as a “cruel monster,” one who is a “violent sociopath” prone to flying off the handle and beating up everyone around him, “The Girl” is simply there to smile and nod, giving implicit affirmation to his damaged worldview. Katie Holmes spends so much of Jack and Jill smiling that she appears to be in a toothpaste commercial for people with a frontal lobotomy.

This is because, in an Adam Sandler film, he is almost always right, and women exist to validate his very, very bad decisions. After all, if a beautiful woman loves him, can he really be so awful? While a film like Happy Gilmore has quite the cult following for its quotable one-liners (“The price is wrong, b*tch!” will forever be a classic), it’s also deeply troubling as a character study. As Ebert points out, it’s unclear why anyone—the audience included—is supposed to like Happy Gilmore, but that doesn’t stop him from sweeping a comely PR woman with a sensible bob haircut off her feet.

All of this is despite the fact that he spends half the movie attempting to murder his romantic rival (Christopher McDonald). Although a little jealousy can be cute, murderous rage isn’t.

More from The Daily Dot: "Obama thinks he could win a third term for president"

Quick question: Can you name the actress who was cast as said comely PR woman in the film? It’s two-time Emmy winner Julie Bowen! If you got it wrong, don’t worry: She’s completely unimportant to the movie in every way, because “The Girl” could literally be played by anyone. She could be portrayed by a toaster or a jar of toothpicks, and it wouldn’t change the film much, although the sex scenes would be a lot more interesting.

The lesson of an Adam Sandler movie is that even schlubs, losers, and abusive misanthropes deserve a hot girl, preferably a compliant one that doesn’t ask you to change too much. While meeting Joey Lauren Adams’ Layla in Big Daddy helps his character (Sonny Koufax) embrace the joys of maturity and fatherhood, Sonny’s still a raging misogynist—and the movie seems to believe this is adorable and totally OK. Leslie Mann plays his best friend’s girlfriend, Corinne, a former Hooters girl he enjoys slut-shaming. In the movie’s final scene—which takes place at a Hooters—Sonny tells her, “Why don’t you put an old tank-top on for old times’ sake?”

To reiterate the point, Sonny then runs into his cheating ex-girlfriend (Kristy Swanson)—who now works there. She left Sonny for a much older man who had his life together, but it turns out that the distinguished gentleman’s “five-year plan” also devolved into chain restaurant employment; he’s working as the fry cook. Her elderly beau waves to Sandler, and his best friend’s son asks, “Is that the guy with the old balls?” Sandler laughs, “Yeah, I think it is. I bet they’re nice!” That’s how the movie ends—with his evil ex being punished.

While Pixels operates on a similar setting of low-simmering sexism, there’s a big difference between the two films—Big Daddy was a major box-office hit, pulling in $163 million back in 1999 (that would be almost $300 million today). Pixelsflopped with a disappointing $24 million in its first weekend out the gate, making it Sandler’s fifth movie in his last six outings that underperformed to expectations. When adjusting for inflation, Blended made less in its entire run ($46 million) what Big Daddy made in just its opening weekend.

In the past sixteen years, Sandler hasn’t changed—but America clearly has. When I saw Pixels over the weekend, there were few people in the theater, and only one of them laughed. It might be lonely to be the girl in an Adam Sandler film, but it must be even lonelier to be an Adam Sandler fan in 2015.