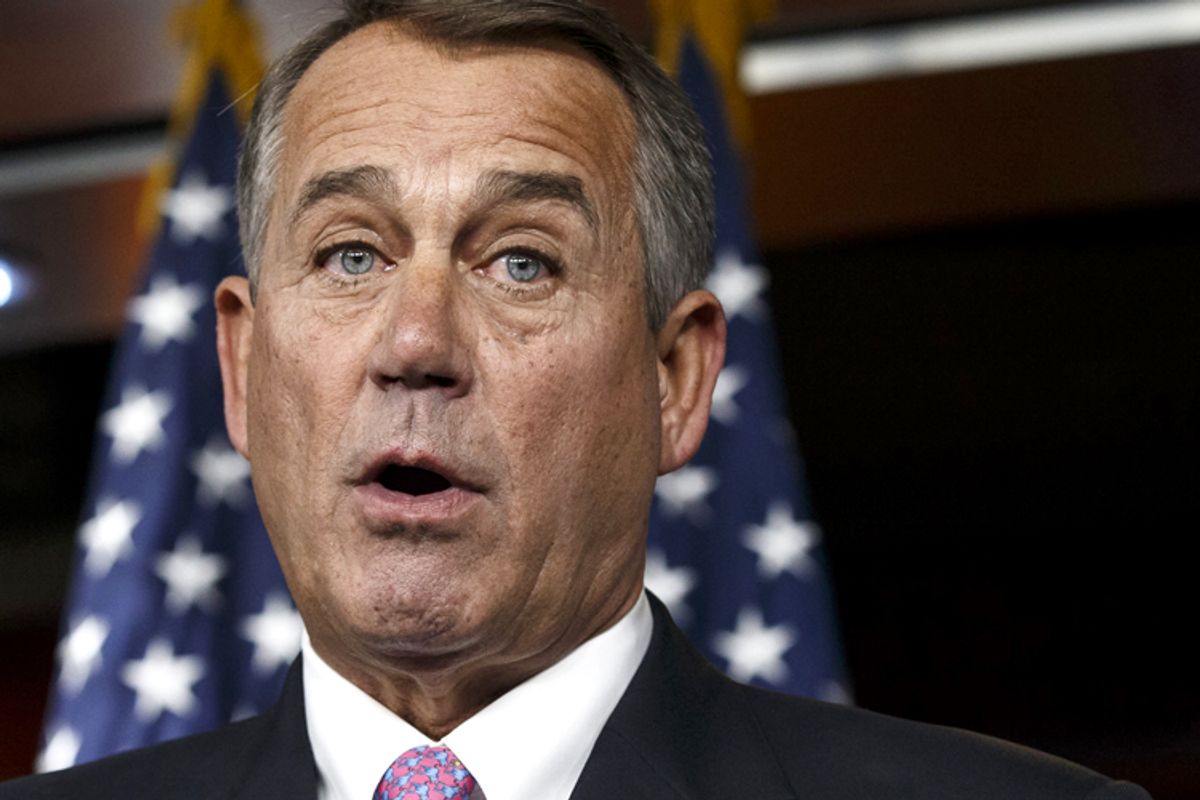 The GOP civil war rages on in Congress. As Republican presidential candidates have been handling each other with kid gloves, it's an entirely different story in the John Boehner-helmed House. The latest: a Republican congressman wants Boehner removed as Speaker of the House.

The Republican saga in the House took a rather melodramatic turn last night, when North Carolina Republican Mark Meadows introduced a motion to strip Boehner of his gavel. Meadows offered a motion "declaring the office of the Speaker of the House of Representatives vacant," charging that Boehner had "through inaction, caused the power of Congress to atrophy."

NBC News described the move as "an almost unheard-of rebellion," but unfortunately for fans of the long-running drama, GOP Civil War, the measure is unlikely to pass and was looks to have been offered more as a symbolic gesture than a literal power move. Nevertheless, Meadows made good on the promise he made back in June when he told Politico that "a change of leadership will start to be talked about in more earnest terms.”

This latest GOP revolt is an effort to bring attention to what Meadows describes as a "punitive" culture of punishment in the House. After Meadows voted against fast-track authority for TPP, Boehner directed House Oversight and Government Reform Committee Chairman Jason Chaffetz to strip Meadows of his seat on the Government Operations subcommittee. Members of the right-wing House Freedom Caucus which Meadows helped found eventually helped Meadows get reinstated but it's clear the conservative is still upset and aiming his outrage at Boehner.

The motion, the first of its kind since 1910, accuses Boehner of having "endeavored to consolidate power and centralize decision-making, bypassing the majority of the 435 Members of Congress and the people they represent," and of using "the power of the office to punish Members who vote according to their conscience instead of the will of the Speaker."

Meadows, one of 25 conservatives to vote against Boehner’s re-election as speaker, has the support of at least some of the more conservative GOP House members who have been itching for a real challenge to Boehner. Fellow North Carolina Republican Walter Jones applauded Meadows for having "the courage to do something about it," complaining that Republican leaders in the House were "not listening to the American people."

For his part, Meadows, a Tea Party Republican elected in 2010 who had previously stopped paying dues to the National Republican Congressional Committee, claims he hopes the motion doesn't actually lead to the eventually ousting of Boehner from the Speakership. “Hopefully it does not have to come,” Meadows insisted.
“It’s really more about trying to have a conversation about making this place work,” Meadows explained to reporters. “Hopefully we’ll have some discussions about that in the days and weeks to come. It’s more about having an inclusive process where you have debate on a regular basis, where you have open dialogue and an exchange of ideas. That’s what this is all about. This body is driven on debate and on the work on committees … and those bills or legislations should be debated based on the merit.”

It's unclear if Boehner will bring the motion for a vote before the House breaks for August recess, although it's unlikely he'd be willing to risk the vote when he could just ignore the entire matter. When these types are (rarely) offered, they are to be voted on within two days but Meadows circumvented the "privileged status," indicating he didn't intend to cause an eruption ahead of the recess.

This House GOP feud comes less than a week after Texas Senator and Republican GOP hopeful Ted Cruz broke Senate decorum when he took to the floor to blast Senate Majority Leader Mitch McConnell as a "liar."