Hate your job, or your life — or both? Find catharsis in the cruel humor of "Review" 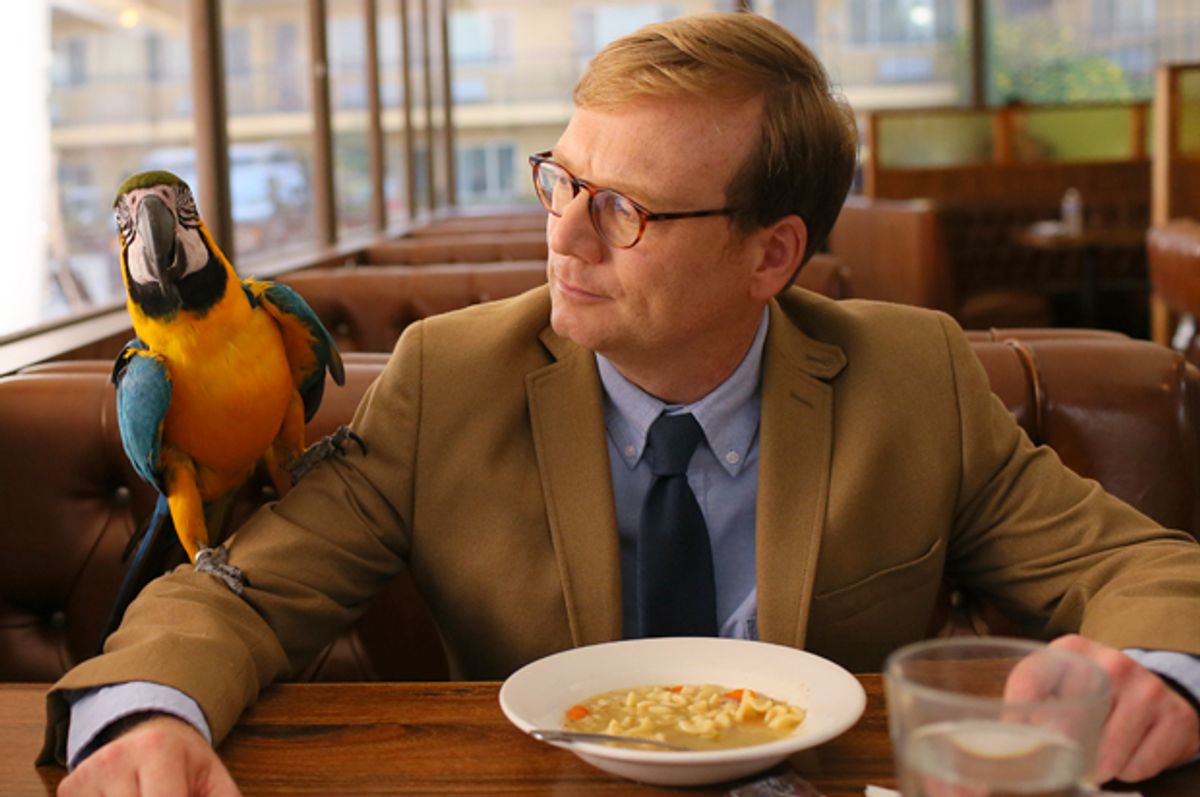 The most crucial episode of “Review” is its third: “Pancakes, Divorce, Pancakes,” in which protagonist Forrest MacNeil must do three things he does not want to: eat 15 pancakes, divorce his wife, and then eat 30 more pancakes. The first few episodes set up the premise of the show—which is a show-within-a-show, sort of. “Review With Forrest MacNeil” is a fictional reality show in which a professional critic reviews not artifacts of pop culture but life itself—from banal challenges like falling down a flight of stairs to morally abhorrent ones, like, you know, racism. Forrest (Andy Daly) approaches his challenges with a certain amount of zeal, manifesting apparent enthusiasm for his mission of discovering whether or not life, “literally all we have,” is in fact “any good.”

It’s the one-two punch of pancakes and divorce that offer him a glimpse of how utterly this assignment is going to destroy his life, both in the ways that matter the least—one day’s breakfast—and those that matter the most to his lifelong happiness. Divorce is just the beginning; Forrest’s largely well-meaning attempts to do his deranged job end up with him killing his wife’s father (in space!) and running naked and ranting into the woods when the show won’t even let him quit.

“Review” is not a nice show. Its brand of humor is cynical, nihilist, and not above being cruel; this is a comedy about the foibles of human existence, so when it lands, it hurts. The show is adapted from “Review With Myles Barlow,” an Australian show, so perhaps unsurprisingly, the show’s humor has a British edge that can skew very dark. Forrest’s life is a meaningless joke; the job he’s shackled to is degrading and pointless; and the life he’s critiquing, barely worth living. And yet what makes Forrest watchable is his bright-eyed innocence, helpfully conveyed by Andy Daly’s wide grin and marked dimples; he’s laughably naïve and ridiculously gormless, trapped in a prison of his own making. But he’s also so well-meaning and optimistic that you can’t help but feel for him. He is almost always immaculately dressed, in a sports jacket look that gives him the air of an absentminded academic. But he faces questions from an anonymous, casual, profane audience, who submit their questions via Twitter, email, and short videos. His response to their requests is somewhere between intellectual curiosity and eager puppy; daffy, adorable, and well-spoken, but ultimately thoughtless.

“Review” asks you not to care about the predicament Forrest has mired himself in, even as it shows you more and more chapters of his struggle. He’s too polite to quit, to decent to plot revenge, too honest to just confess to his wife that he’s only divorcing her for the show. It’s brilliant torture, treading a fine line between humor and horror, mining both Forrest’s optimism and his desire to review life for tragicomedy.

But in that it is, like all humor, examining the human condition, in “Review”’s particular case the show is examining what it means to have a job and have a life. Forrest fails at it, because he’s the perfect employee—self-sacrificing, cheerful, a stickler for the rules, with absolutely no boundary between his personal life and the demands of work. And like a rabid shark, his job jumps the fence and lays waste to whatever it can reach, as the combined forces of his rapacious producers and the detached, possibly trolling commenters join to make his life more and more chaotic.

I admit—as smart as I find “Review,” I can’t always sit through it; the story so ruthlessly destroys Forrest that by season two, he’s just a shell of his former self. The season premieres with Forrest back on the job, having either come to accept his new role in life because the other option, clearly, was insanity. His one crutch now is a veto booth, where he’ll get three chances all season to say no to a challenge. But because Forrest’s life is so bleak, that sliver of hopefulness will likely just serve as even more material for the inevitable, disastrous denouement. “Review” gets a solid rating. Forrest MacNeil’s life? Zero stars.