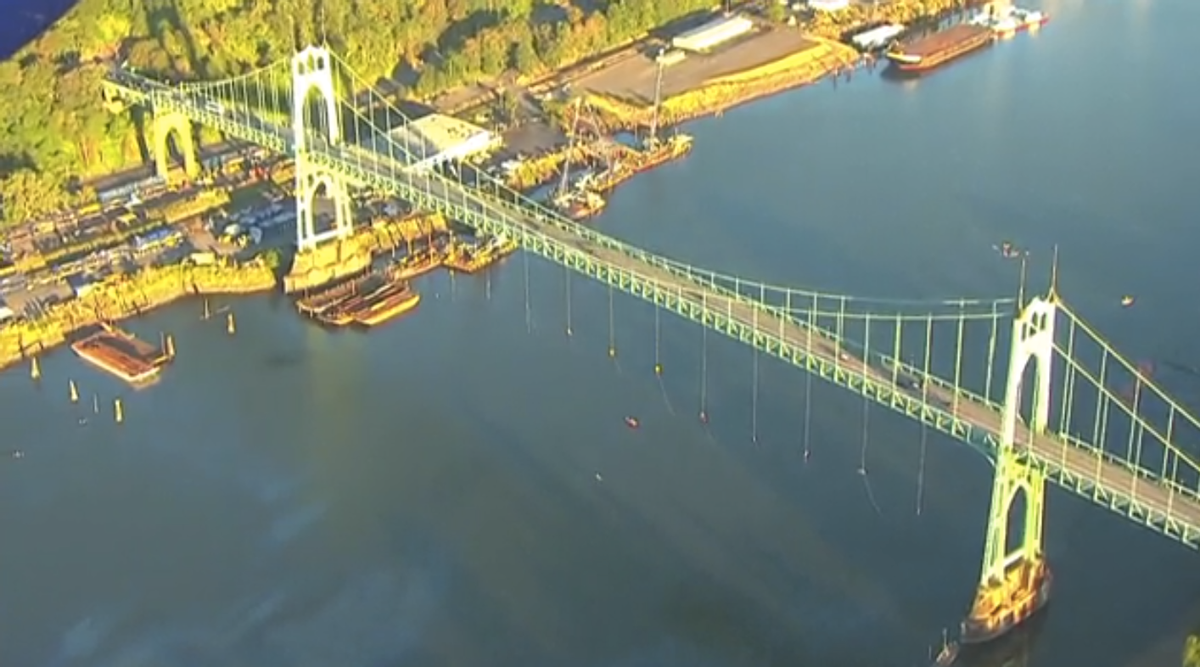 Despite the danger of a local environmental disaster and the looming threat of climate change, Shell is determined to start drilling for oil in the melting Arctic. And as it's spent the summer gearing up for that risky endeavor, protestors have been equally determined to stop it.

There were the six activists who, back in April, boarded a drilling rig as it made its journey from Hawaii to Seattle. There have been the kayaktivists, who formed a floating blockade in an attempt that same rig from leaving the Seattle port. There were the "Raging Grannies" who chained themselves to railroad tracks in an attempt to slow down work.

But now, with the legal hurdles to Shell's Arctic missions all but overcome, protestors have launched a spectacular last-ditch effort to stop the drilling: 13 Greenpeace activists rappelled off a bridge in Portland Tuesday night and are now dangling in the path of the Fennica icebreaker, which had returned to port for repairs -- and without which Shell can't begin.

The images of the scene are stunning:

It's unclear how long the protestors plan to hang in there (sorry), but according to Greenpeace, they brought along enough supplies (including, reportedly, diapers) to last them for days. Thirteen additional climbers are there to assist them, and for now, police say they have no intention of attempting to remove them.

The bigger question is how long the activists would need to stay in place in order to meaningfully interfere with Shell's plans -- which, in these circumstances, might not be very long at all. There's only a small window during which drilling in the Arctic is feasible, and Shell is already running out of time. The company acknowledged as much in a complaint filed against the activists who boarded a rig in April: “Given the extent of Shell’s investment and the short summer drilling window," it read, "each and every day is of vital importance to Shell in its ability to successfully complete the 2015 drilling program.”

“Every second we stop Shell counts," said Annie Leonard, the Executive Director of Greenpeace USA, in a statement supporting the bridge protestors. "The brave climbers here in Portland are now what stand between Shell and Arctic oil."