The world let these monsters get away with it: Bill Cosby, Jimmy Savile & the license to commit hideous crimes

Trying to understand how an abuser like Bill Cosby goes unchecked? The story of Jimmy Savile provides an answer 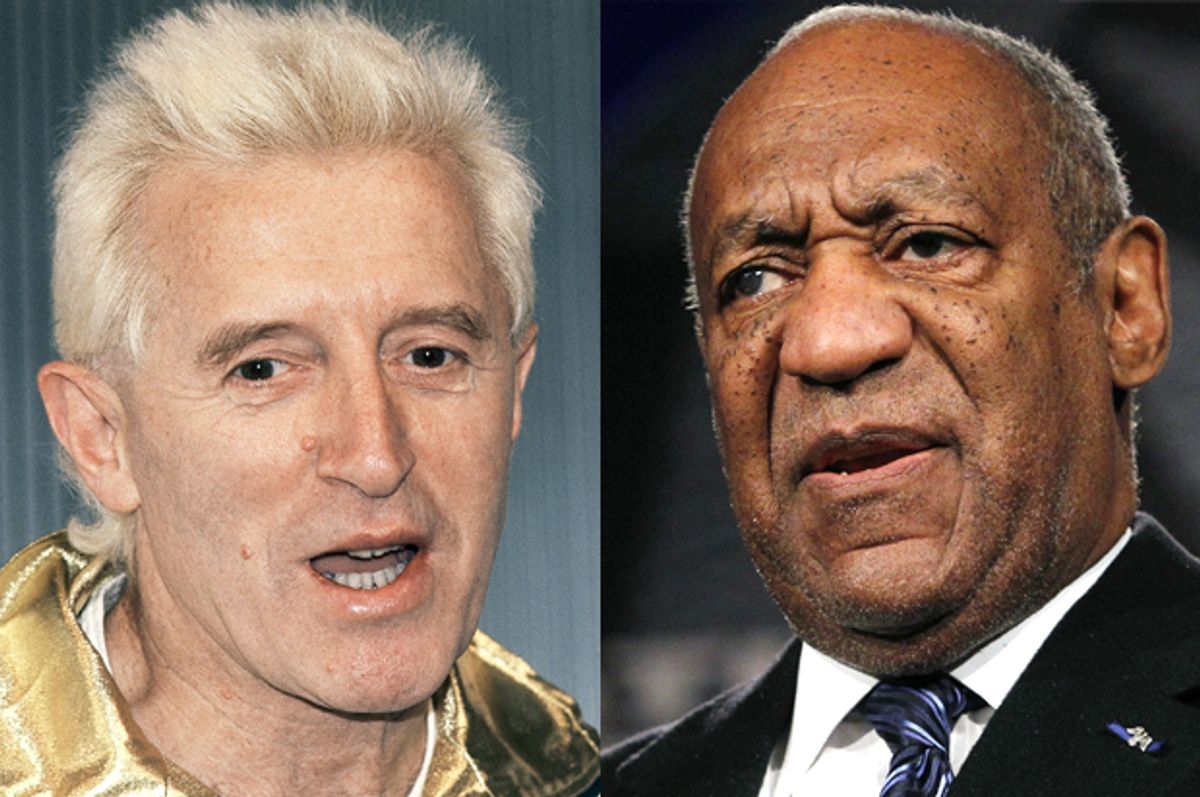 If you want to understand how Bill Cosby was able to get away with his many crimes, you could do worse than to watch this footage from a Cosby appearance on "Larry King Live" in 1991. In the clip, Cosby jokes about "Spanish Fly," the supposed wonder drug that would act as an instant aphrodisiac when you put it in a woman's drink. It's a recurring theme of Cosby's, one that he'd been using in routines since the 1960s. King proves to be an extremely willing audience for these jokes.

Here's some of their back-and-forth (emphasis added):

Cosby: The old story was, if you took a little drop, it was on the head of a—
King: Pin.
Cosby: Pin. And you put it in a drink—
King: That’s right. Drop it in her Coca-Cola–it don’t matter—
Cosby: It doesn’t make any difference. And the girl would drink it—
King: And she’s yours.
Cosby: Hello America!

Two men sitting around and laughing about drugging women. Is there any better symbol of a culture that allowed Bill Cosby to rape dozens of women with impunity? It takes a society that regards women as undeserving of basic dignity or protection to make a Bill Cosby feel safe. And you can be sure that it takes a lot of people knowing exactly what Cosby was doing and looking the other way.

The latest issue of New York magazine features searing, heart-wrenching testimony from 35 different women about what Cosby did to them. It is important not just because it is the most comprehensive single collection of stories about Cosby's monstrosity that we've yet seen, or because it celebrates the monumental power and courageousness of these women. The magazine could also force us to begin moving into what needs to be the next phase of the Cosby story. This phase needs to contain two elements: a broader cultural one and a more directly forensic one. We need to talk about why our society let Bill Cosby do what he did, but we also need to know exactly who helped him do it.

As I read the women's stories, one name kept popping up in my mind: Jimmy Savile. Like Cosby, Savile was a beloved entertainer for decades in Britain. Unlike Cosby, he never married and maintained a public image as an eccentric bachelor. But he nevertheless became a symbol of all that was good about the UK. He had a show called "Jim'll Fix It," where children would write him begging to meet some famous person or grant some other wish and he would make it happen. He raised millions for hospitals and worked with mental patients at one of the country's toughest psychiatric units. He was given a knighthood by the Queen.

It was only after Savile died that the other shoe dropped. It turned out that he was one of the country's most prolific—and horrific—sex offenders. Over a 60-year period, Savile had raped and molested hundreds of people. Most of his victims were underage girls, but he also went after boys, women and men. In 2014, the country's National Health Service disclosed that Savile had used his access to hospitals to assault scores of patients, aged between five and 75. He was even reported to have bragged about violating dead bodies.

Cosby's crimes are perhaps not so flamboyantly ghoulish, but the parallels are unmistakably there. The real reason the two are so alike, though, is not because they were both seemingly benevolent icons who turned out to be predators. It's that they were both able to commit their crimes so openly.

There were enough rumors about Savile's pedophilic tendencies that he was asked about them multiple times in interviews. Just as Cosby joked about drugging women, Savile freely cracked wise about "being feared in every girl's school in this country." Comedians would regularly make winking references to his supposed depravity. And yet, nothing happened while he was alive. The few times people complained, nothing was done.

When Savile died, though, the floodgates opened. One person after another—from policemen to BBC staffers to hospital workers—revealed that "everyone knew" about the kinds of things Savile was doing. Other victims came forward, alleging that Savile was part of a "pedophile ring" at the BBC.

Everything we have learned about Bill Cosby suggests that he was equally compulsive and methodical in his predation. In his now-infamous 2005 deposition, he speaks about how he took care to choose the same kind of woman to prey on over and over again. The women in the New York magazine issue all tell chillingly similar stories about how he assaulted them. I would be stunned if there are not many, many more women who have yet to speak up, and if, just as with Savile, many, many people didn't know exactly what Cosby was doing.

We know, for instance, that on at least one occasion, Cosby allegedly involved an unnamed friend in his crimes. Here's how Joyce Emmons, one of his accusers, told the story to New York:

I do remember waking up in a fog and opening my eyes, and I had no clothes on, and I had clothes on when I took the pill. I had no clothes on, and there was Bill’s friend, totally naked in bed with me. I didn’t share my room with him, so he came in there. I don’t know how, or what happened. I looked at him, and he looked at me, and he started to laugh and smile, and he said, ‘Oh, did you have a good time?’

Does anyone seriously believe that this was the only time one of Cosby's friends joined him? Or that, in a world where Cosby and Larry King could joke on national television about drugging women, Cosby didn't feel like he was perfectly safe? After all, one of his accusers went on TV in 2005 to talk about her experience. She showed her face. She used her name. Nobody cared. In that kind of society, why wouldn't Cosby be totally open about his actions with a wide swath of people?

Now is the time to figure out exactly who those people were. How many people at NBC, home of "The Cosby Show," knew what Cosby was doing? How many in the entertainment world talked among themselves about him? Who walked in on him and did nothing about what they'd seen? Who were the people who helped him find women to target? Who joined in?

It is obvious that we have not even scratched the surface of what Bill Cosby did. But we're even farther away from dealing with these wider questions. That process needs to start immediately, because Cosby is far from the only guilty one here.