Samuel DuBose was pulled over for driving without a license plate. Shortly thereafter, he was shot in the head 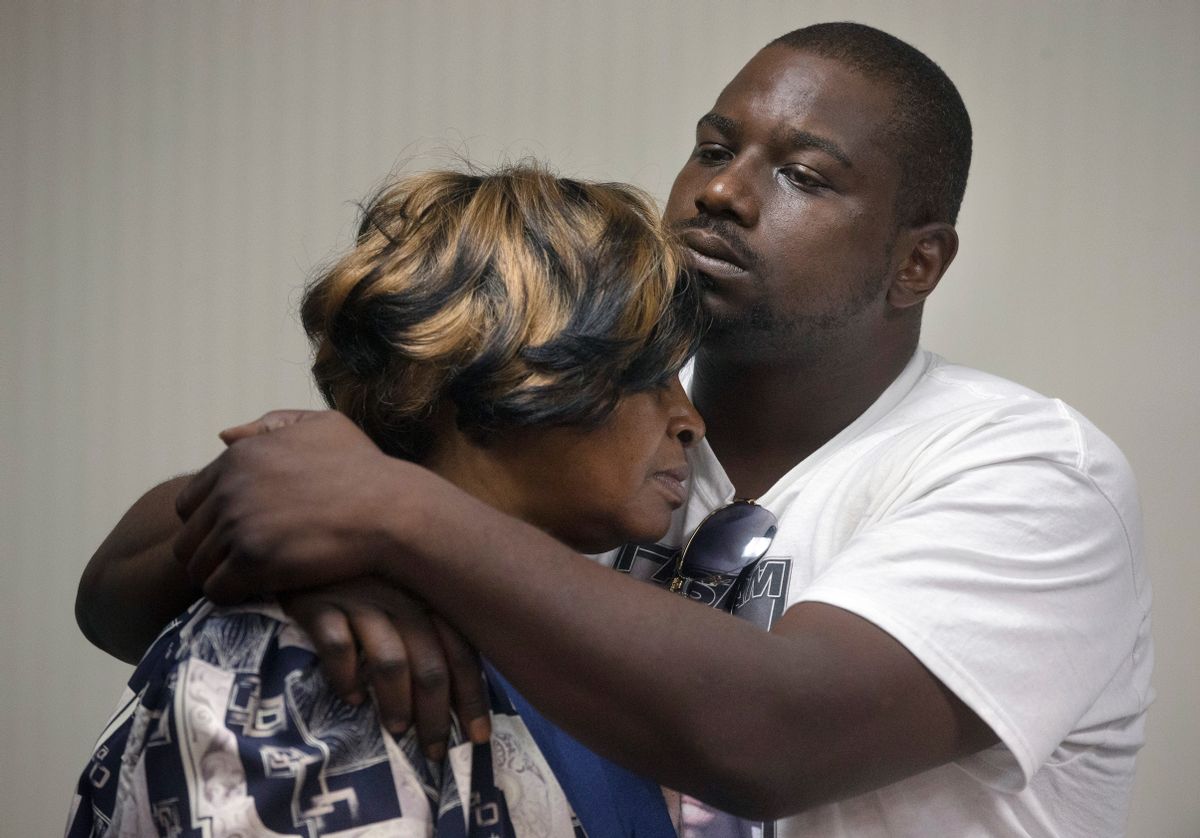 “He should have never been a police officer,” Deters said during a press conference, referring to Ray Tensing’s actions as “the purposeful killing of another person” and saying that such an act of violence “just doesn’t happen in the United States.”

“You will not believe how quickly he pulled the gun and shoots him in the head,” he said.

Tensing, who turned himself in this afternoon, has been charged with murder and involuntary manslaughter. If convicted, he faces 15 years to life in prison. [...]

"I have been doing this for 30 years," Deters said. "This is the most asinine act I have ever seen a police officer make."

Tensing had claimed after the shooting that he was being dragged by the suspect's car and had no choice but to take lethal action, but his own body camera told a very different tale. He had stopped DuBose for a missing front license plate ("a chicken-crap stop," in Deter's words). After a few minutes of calm discussion, during which he asked for DuBose's license, and DuBose said he didn't have it on him and suggested that the officer run his name to verify that he was driving legally, Officer Tensing told him to undo his seatbelt. Then he pulled his weapon and shot him in the head.

The prosecutor said he didn't think Tensing woke up that morning with the intention to kill a black man, but rather lost his temper. (If Tensing did this because he was angry, he has a fuse so short it's surprising he hasn't killed dozens of people already.) Samuel DuBose wasn't even being disrespectful, something that isn't even illegal, much less a capital crime, but nonetheless often results in citizens of all racial and ethnic persuasions being abused, and many African Americans in particular being shot dead. No, in this case, the interaction was so brief and uneventful one can't even point to that as a reason for the officer to shoot DuBose at close range.

It's too soon to know how most police feel about this, but the commentary of various Internet message boards like Police One indicate that some cops are angry at the prosecutor's strong language. (One can't help but wonder if they care this much when the alleged perpetrator isn't a police officer.) One anonymous officer in particular, whose comment has been "liked" by a number of others, is especially unhappy that Prosecutor Deter said this routine traffic stop was "chicken-crap stuff," arguing that Tensing had a perfect right to stop DuBose for not having a front license plate and also had the right to arrest him for failing to have his license on his person. But that's missing the point, of course. What Deter was saying was that there was no good reason to arrest this fellow on such a minor charge and certainly no reason not to just let him drive away, especially if the choice was between that and shooting him in the head at close range.

When asked if the officer should have used a taser instead of a gun, Deter even went so far as to say, "this guy didn't deserve to be tased and he certainly didn't deserve to be shot in the head." That's a very unusual point of view in law enforcement, unfortunately. Most authorities don't think one has to do anything to deserve being tased, because it's non-lethal, so no harm no foul (well, some of the time, anyway.) And there are few in his capacity who would say that an officer should just let someone drive off in that situation. As we saw recently with the footage of the Walter Scott shooting in Charleston, S.C., that seems to fly in the face of some police code which says you can never let a suspect flee and simply catch up with him later. You have to shoot him instead.

Tensing had DuBose's license plate. He could have found him easily. There was no reason to pull his gun when he did, much less shoot him. Indeed, there was no reason for him not to run the man's name in the system and then just give him a warning. He wasn't being belligerent or doing anything suspicious to merit the close scrutiny he received.

Despite the almost instant drawing of the gun and firing, the Police One commenter harbors doubts that the officer didn't, in fact, fear for his life, saying, "If any part of that officer was attached to that motor vehicle -- then he can clearly articulate his life was in fear." He adds,"this officer will pay- - solely based on the current political climate in America. Sad."

Actually, the current political climate in America is finally forcing some authorities to question this belief that being able to "clearly articulate" that you felt your life was in danger in a situation like this automatically means it was a reasonable fear. The tape shows it clearly was not. And if it weren't for that tape, we wouldn't know that, showing clearly that body cams and dash cams are a necessity in law enforcement. But body cams are only part of the solution to this problem. This "fear factor" mindset stems from the same fundamental philosophy that Stand Your Ground and castle doctrine laws come from: If you feel afraid, you have no obligation to retreat if possible; you may legitimately shoot and kill someone.

Former Attorney General Eric Holder made the following comment about this recent legal movement, which is backed by conservative groups like ALEC and the NRA, in the wake of the Trayvon Martin killing:

"There has always been a legal defense for using deadly force if — and the 'if' is important — if no safe retreat is available. But we must examine laws that take this further by eliminating the common sense and age-old requirement that people who feel threatened have a duty to retreat, outside their home, if they can do so safely.

"By allowing — and perhaps encouraging — violent situations to escalate in public — such laws undermine public safety. The list of resulting tragedies is long and, unfortunately, has victimized too many who are innocent.

"It is our collective obligation. We must 'stand our ground' to ensure that our laws reduce violence and take a hard look at laws that contribute to more violence than they prevent."

That logic applies to police as well as civilians. In fact, it applies more to police than civilians, because police are charged with protecting the public, and act in our name.

You'll notice that police commonly take hours to deal with virtually any call --- unless someone is "defying" their order, in which case they will not take even an extra five minutes to try to defuse the situation or allow an unarmed suspect to flee, even knowing that they will be able to catch up with them later. It's not about time pressure or fear for their own lives, it's about disrespect. And it's a particular problem for African Americans, with the racial bias that clearly underlies so many of these stops.

Many cops are skilled and experienced enough to handle these situations peacefully, and other professions which have strategies to deal with potentially violent altercations without escalating them could be tapped for better training. This isn't brain surgery. But the militarization of the police and the combat zone attitude adopted by so many departments makes little use of any skills other than sheer force when what largely makes for effective policing in a free society are psychology, patience, common sense, empathy, confidence and maturity. If these skills were more highly valued, there is little doubt that unarmed citizens with names like Michael Brown, John Crawford, Eric Garner, Tamir Rice, Walter Scott, and many, many more would be alive today. Leaving the gun in the holster would certainly have saved the life of Samuel DuBose.

There are many unanswered questions about this latest killing. But one thing we know for sure: If there had not been any video, the officer's account would have closed the books on this incident immediately. Obviously, that happens with some frequency. Making body cams mandatory will help as it did in the DuBose case. But to truly fix this problem our society must confront the root causes -- racism, police militarization and rampant abuse of authority.