In 2006, Sandler was angry Urban Outfitters wouldn't let him use its restroom and excited to be a new father 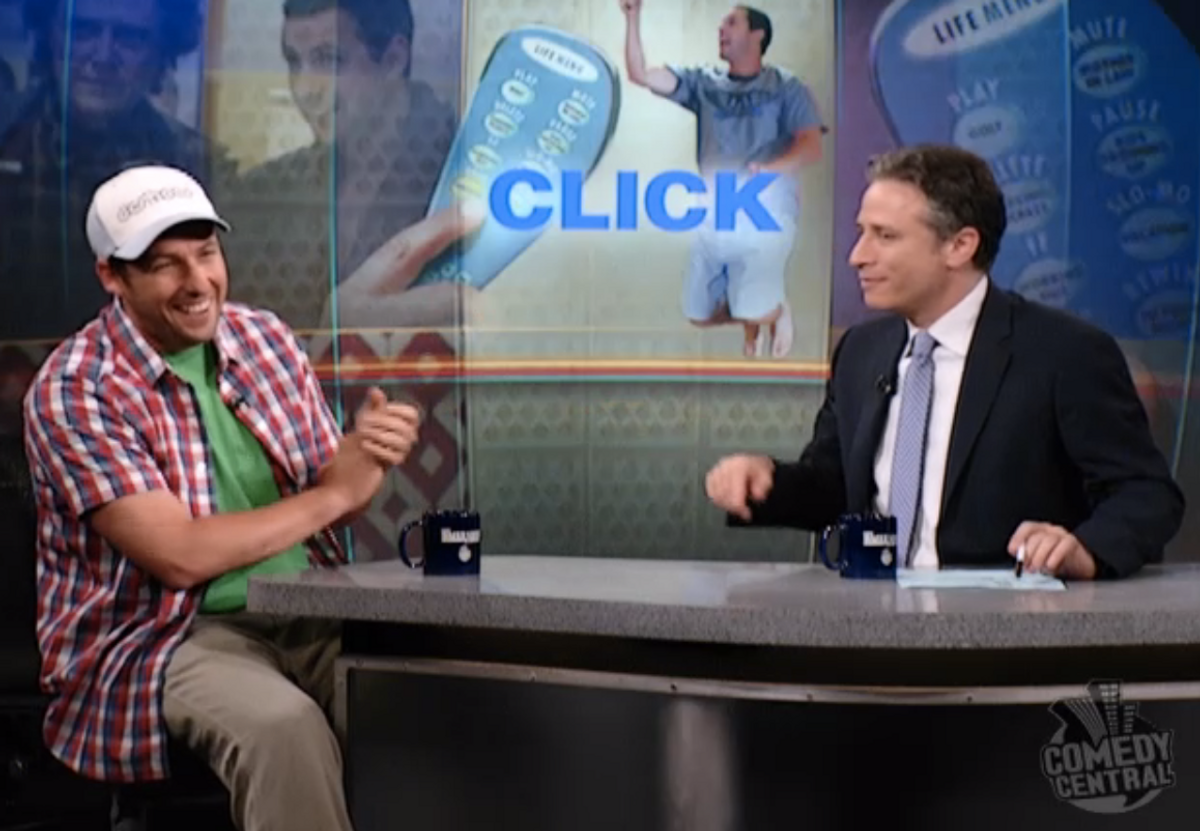 Today, we look back at Adam Sandler's appearance on "The Daily Show" from June 2006:

Do you remember the premise of the 2006 film "Click"? If not, consider yourself profoundly unlucky. It goes something like this: Adam Sandler, who plays Michael Newman, is mad about how much time he's wasting at work. He dreams of being able to "fast-forward" all the humdrum and just cut to the fun stuff. Then, one day, while looking for a universal remote control at Bed Bath & Beyond, he finds himself in the "Beyond" section where a mysterious man (Christopher Walken!) hands him a remote control. But not just any remote control! -- it's one that controls time.

Jon Stewart summed the movie's premise up best in 2006 when he brought Sandler onto his show and said, "Everybody's had this thought when they were high." The difference between Sandler and these people? (No, not the drugs; he was probably high): He had the "wherewithal" and the "tenacity" to make it possible, according to Stewart.

In what will surely go down as the most 2006-ish thing to happen in 2006, Sandler appeared on that same program wearing a green tee and a plaid short-sleeved button-up, which he announced he'd purchased from Urban Outfitters. This was long before Urban Outfitters was selling tapestries that looked "eerily reminiscent" of the Holocaust or "vintage" and faux-bloodstained Kent State Sweatshirts. UO was a destination. And Sandler opened up to Stewart, telling him that he'd attempted to use a New York City location's public restrooms and been denied access.

That begged the question: What were UO employees afraid of? Had they watched "Billy Madison" and worried that Sandler would pee all over the place? Stewart made the keen observation that this was New York, after all. "Most restaurants haven't been cleaned since the '50s," he said.

Today, Sandler is probably wishing he could hit rewind on that remote (ha-ha, call back) to his glory days. A recent Daily Dot piece on Sandler's latest film "Pixels" -- which, at one point, boasted an 18% on Rotten Tomatoes -- declared the comedian officially "finished." It went on to say that his latest followed "another abusive schlub with a hot, compliant wife" and that "America had finally seen enough."