No mourning, no peace: Sam DuBose, Sandra Bland and why Black lives don't matter (yet)

Could public, communal grieving become a new weapon of activism that could effect lasting change? 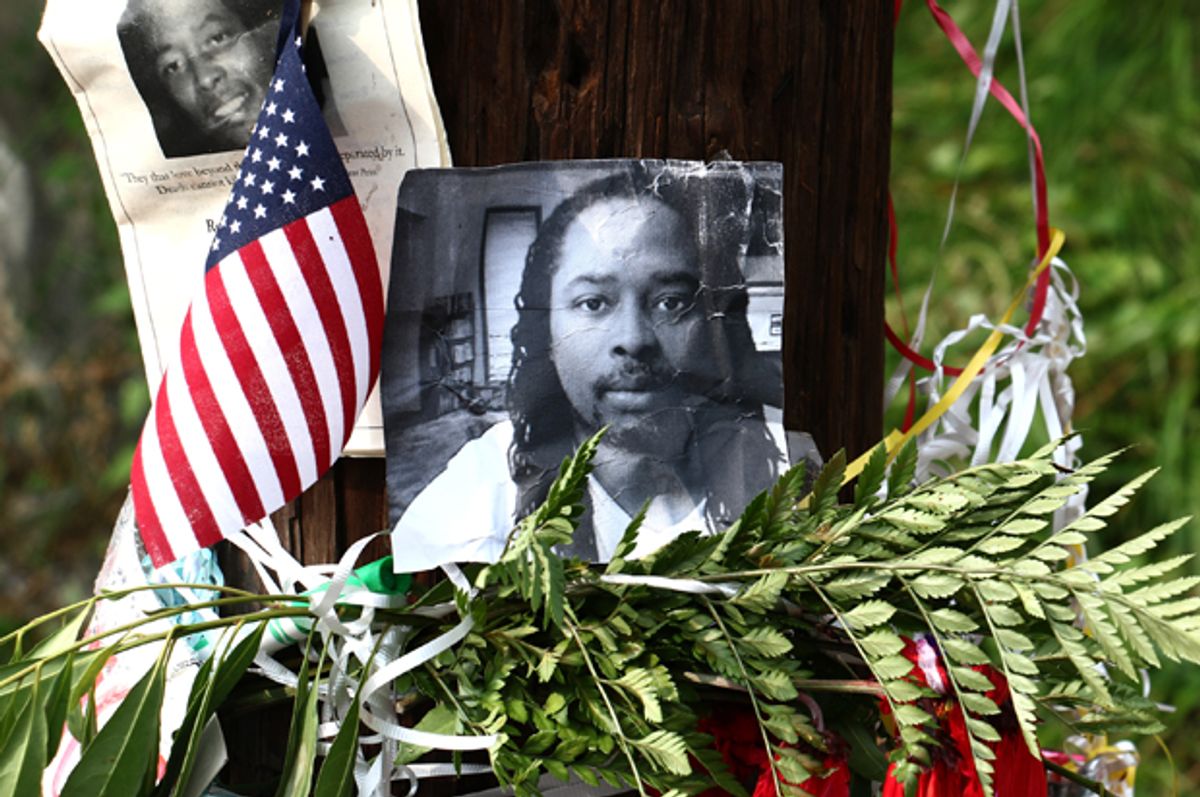 Photos of Samuel DuBose hang on a pole at a memorial, Wednesday July 29, 2015 in Cincinnati, near where he was shot and killed by a University of Cincinnati police officer. (AP/Tom Uhlman)
--

There are many bad things that come along with losing your mother to metastatic breast cancer when you're 15 years old. For me, one of the worst parts was being told by my father, a few weeks after her passing in July 2000, that I would have to start back at school soon—a new school, no less. This was one more part of death, in addition to the part where I had to watch the strongest woman I knew become, physically, little more than flesh and bones; that didn’t make any sense to me. Why wasn't there some kind of rule in place that allowed me to start school later... much later, preferably? Why didn't I have more time to mourn, before I had to get back to the real world?

It’s true that, if it'd been up to teenage me, I probably never would have started sophomore year. And it's difficult to determine how much time is "enough" time to mourn a person, a body. But there's something vile—violent even—in telling a person that their time to mourn is up. Or worse, there’s something violent in telling a person or a community that their time is up because there is a new body to mourn. Before we find out what happened to Sandra Bland (and I need to believe that we will), there will be a new victim of police brutality to mourn. In fact, many of us are already hashtagging a new name this week: Sam DuBose.

On July 29, footage from a police body camera showed a disgusting scenario that Ava DuVernay aptly described as “two minutes to murder.” And we had to put aside, or at least compartmentalize, our still-burning outrage about Sandra Bland to speak out against another case of police brutality. Few of us can even celebrate the fact that, in this case, finally, an officer was charged with murder. It’s partly because we know it never would have happened without the police body camera as proof, and it’s also because there is still a body (on top of other bodies) to mourn.

On the one hand, there is such a thing as multitasking. Surely, we can talk about both case and demand justice for both lives lost—put both names in a headline. But, in addition to the injustice of the bodies lost, there’s the injustice of not being permitted time to pay our respects and to mourn each body. This question of time to mourn comes to mind in part because of the haunting words Sandra Bland’s mother spoke at her child's funeral: “Once I put this baby in the ground, I’m ready. This means war.”

And although she also spoke of God and forgiveness, DuBose’s mother made similar allusions to war, after she thanked the protesters demanding justice for her child: "I'm ready to join the battlefield."

As if burying a child isn’t enough, America is now in such a state that our mothers must then go to war? It’s like the “Iliad,” only worse; we witness a parent in desperate need of burying the body of a child, in the midst of an epic war. The difference is that after Priam is given back Hector’s body—after Hector was murdered and his corpse abused by Achilles—the Trojans were granted a reprieve from battle. The very man (or half-man, half-god) who murdered their son at least gave them nine days to mourn, and Hector was buried on the 10th day. The words of Audrey DuBose and Geneva Reed-Veal remind us that there is no rest or reprieve for the mourner of a black life. This, too, is an act of violence against us.

To say that black Americans (those of us who are paying attention) are exhausted is an understatement. One popular site implored its readers to watch the video of Sam DuBose’s murder, and a slew of readers commented that they refused to do so. They couldn’t take it anymore. Writers of color and activists everywhere are making similar declarations, and as someone who refused to watch the Tamir Rice video for many months, I understood. (But I’ve since committed to watching these videos, and I do know that more are coming.) This is exhaustion, fatigue, anger — fear, even. But it’s not the same as mourning, which we are not permitted to do.

We are not permitted to mourn because, almost daily, we are presented with new images, videos or headlines that bring us more rage, and then fatigue. This is partly due to the very nature of a media in constant search of the hot new story; Sandra Bland is so last week—what’s the hot new, click-worthy, police brutality story we can jump on? But in demanding justice—in demanding that black lives matter—we must also demand our time to mourn.

One problem with such a demand is that there is a certain quietness associated with mourning. And those of us fighting, writing and speaking out see quietness and silence as the enemy. But any lover of literature, especially poetry, will tell you that there can be great power in silence when it is actively employed (the same is true for film, music and other performative and creative forms). In Sufi poetry (much of which centers on a certain exquisite pain that comes from loving and losing), for example, the poet does not speak the name of his beloved. Silence is embraced as a poetic device and as a part of the greater narrative.

Indeed, that’s a lovely idea, but the reality for many of us is that silence is the killer. It’s the reason we have the #SayHerName hashtag, because there seems to be, already, too much silence surrounding these stories. Questlove even took to Twitter to call out those who remain silent in the face of such obvious racism and brutality. But active mourning does not have to equate to such silence, and it’s certainly not the same as willful ignorance or fear of speaking out. Mourning might be understood as more creative than that, more defiant—a refusal to move on, even as those [people, headlines, politicians] around you insist that life must go on.

There’s a great but horrifying scene in Steve McQueen’s “12 Years a Slave” (a movie of many great but horrifying scenes) where Solomon tells a mother whose children were taken from her that he’s had all he can take of her mourning. She has been crying incessantly and it’s become too much to bear. Solomon reminds her that they are all suffering a great injustice—he was, in fact, a free man before he was kidnapped—but they must try to rise up somehow and get on. He’s also, he thinks, looking out for her, as the master’s wife won’t bear her loud cries much longer. But the woman makes one of boldest statements of anyone in the film when she refuses to do so, and even chastises Solomon for suggesting that she put aside her grief, or veil it. Slave or no, she is in mourning, and if they take everything away from her—and indeed they have—she won’t let them have her grief.

As someone who has yet to let the tears fall for Sandra Bland or Sam DuBose (we all grow numb, especially when we are forced to do so), I can’t help wondering what it would look like if those of us fighting for black lives embraced mourning as an act of agency. We have marches where we shout and scream (and we are beaten, maced and arrested). What would it look like if we had more space designated specifically for weeping, wailing? What would it look like if we demanded bereavement time at work for every black life lost during a confrontation with police? Or for lives lost during acts of domestic terrorism? There are other cultures where grieving is more active and performative. How would it look if we covered the mirrors in our homes for seven days? What if we took the time to cover every mirror we saw with the names of just a few of those we lost? Kept our children out of school? Wept even more? Muslims are taught that they must weep when they read the Quran. Even a forced weeping is considered an external act that can connect an individual to greater consciousness.

And literature is filled with remarkable images of people mourning in all types of ways. Virginia Woolf in “To the Lighthouse” captures the act perfectly: “[Mr. Ramsay, stumbling along a passage one dark morning, stretched his arms out, but Mrs. Ramsay having died rather suddenly the night before, his arms, though stretched out, remained empty.]”

I make mention of all these possible and varied techniques because it’s clear that we as an American society have forgotten (or never knew how) to properly mourn. And those of us living as black Americans are often not given the choice, because we are presented with far too many bodies at once. If black Americans begin to treat mourning like a unique tool that—sharpened, honed and concentrated on a particular goal—could make for powerful changes, it’s interesting to imagine the trickle-down effect it might have on the rest of this country. This is a country that has seen 204 mass shootings in 204 days this year. Did we mourn those bodies? This is a country that has seen 664 people killed by police so far this year. Did we mourn those bodies?

Knowing that I, too, could have been Sandra Bland, I admit I’ve pulled a Tupac once or twice and asked myself, if I die in police custody, “how long will they mourn me”?

The one good thing about losing your mother to metastatic breast cancer when you're 15 years old is that, by age 30, you understand that you will not function without mourning. You will not finish school, write another blessed thing, or raise your own children properly if you do not mourn. I still mourn for my mother in new and different ways. I even write this on the day of her death 15 years ago; this is mourning. If a single person cannot survive and thrive without active, open mourning, it makes sense that a movement—composed of people—cannot either. If we want Sandra Bland’s life to matter and Sam DuBose’s life to matter, we must demand time to mourn. If we want the world to remember Freddie Gray, Mike Brown, Trayvon Martin, Tamir Rice, Kindra Chapman, Christie Cathers, Sarah Lee Circle Bear, Raynette Turner, Aiyana Stanley-Jones, Eric Garner, Rekia Boyd, and the many others, we must show the world what mourning looks and feels like—how deafening it can be, and how silent.

So keep tweeting and posting. Riot, protest, read, scream, unfriend. If you pray, pray. And if you write, write. But ask yourself, at the end of it all, have you actually mourned a black body today?