Shell is getting desperate: The battle over Arctic drilling isn't over yet

The oil giant's victory in Portland is only temporary 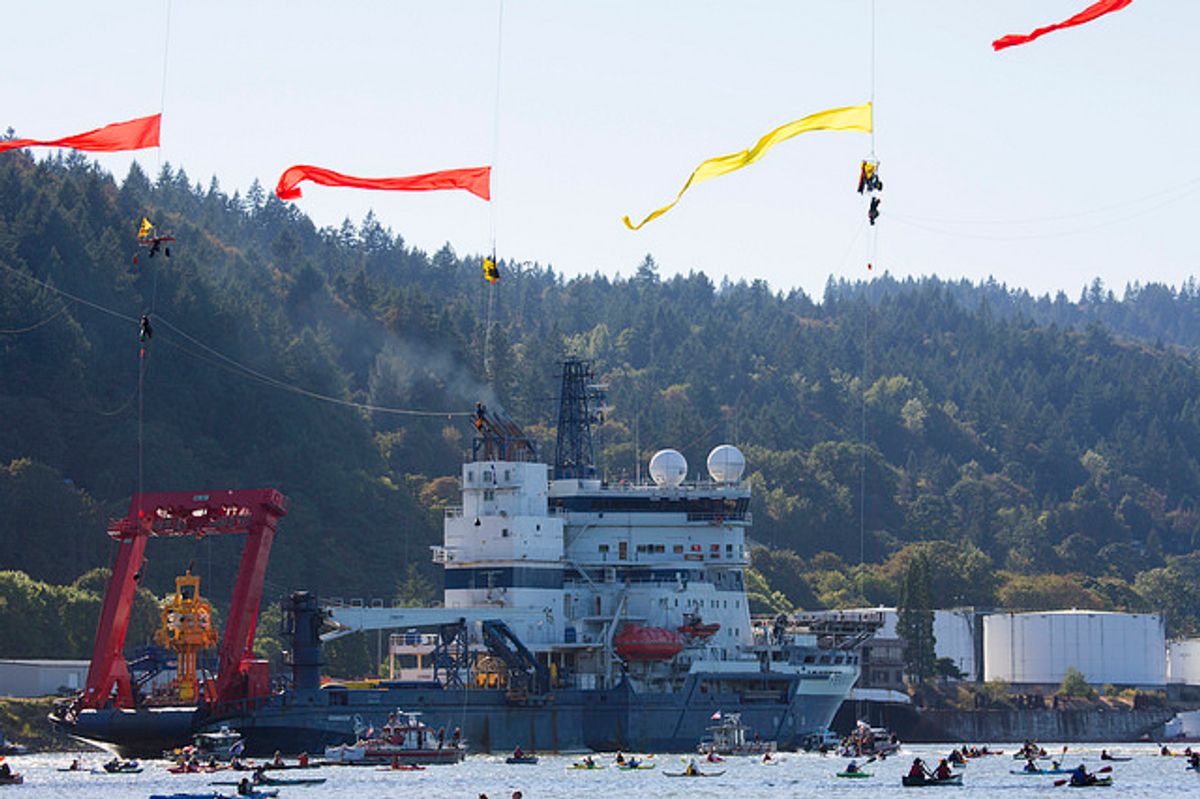 The Greenpeace protestors who lowered themselves off Portland, Oregon's St. John's Bridge in an attempt to stop MSV Fennica from rejoining Royal Dutch Shell's Arctic drilling fleet are back on solid ground today. Police removed just enough of them to allow Fennica to slowly creep forward and away, surrounded by kayakers and harangued by crowds on shore. Greenpeace claimed a symbolic victory, while Shell's major response was to announce that it had commenced drilling operations in Alaska's Chukchi Sea.

A victory for Shell? Perhaps not. Greenpeace's ongoing efforts to block their drilling fleet are causing the company real worry and they're starting to look desperate. Their attempt to drill the Chukchi in 2012 ended in embarrassing disaster when their rig ran aground and its crew had to be rescued by the coast guard. Despite repeatedly assuring everyone that this time will be different, it hasn't been. The Fennica was in Portland for repairs after gashing its hull open, and they had to change their drilling plans after the original one proved too threatening to local wildlife. The protests at every stop of their fleet's journey have been so persistent that they obtained a restraining order against Greenpeace in May, after activists boarded their drilling rig Polar Pioneer while en route from Hawaii. They've now sunk $7 billion into Arctic drilling with nothing to show for it but bad PR, and even its shareholders are getting nervous. The Wall Street Journal summed up the risk earlier this month, before the latest protests,

It could be a year or more before Shell knows whether it is sitting on a bonanza of crude or drilling one of the most expensive duds in history. Anything less than a blockbuster would be a significant setback for the company, Shell executives say, and a blow to oil development in the U.S. Arctic.

“Everybody’s watching to see if we’re going to fail or succeed out there,” said Ann Pickard, an executive vice president who runs Shell’s Arctic division. “If we fail for whatever reason... I think the U.S. is another 25 years” away from developing Arctic resources.

On Thursday, even as the Portland protests reached their height and the Alaskan District Court was preparing to fine Greenpeace $2,500 an hour until they ended, Shell was announcing 6,500 layoffs and bemoaning the price of oil, which has been falling as fast as the value of their stock. In the call announcing the layoffs, CEO Ben Van Beurden was forced to defend the Arctic project, resorting to the argument that funding was already allocated through next year and, “you can't turn it off and on whenever you feel like it.”

It's come down to one more year, one more try for Shell. The anti-drilling protests that have unfolded over the spring are therefore been much more than mere showmanship. Any delay or disruption to Shell's schedule could bring about a change in the company's own internal calculations of costs and benefits, regardless of however the political winds blow. The irony (or tragedy) is that Shell is one of the few major fossil fuel companies that fully accepts the reality of climate change and the need to cut emissions, going as far as to call for a global price on carbon dioxide. Their proposed solutions are unsurprisingly weak sauce (more "clean" natural gas, more carbon capture technologies) but they are still aware that the transition from fossil fuels is coming fast. They don't have 25 years to wait for another chance at the Arctic. The world can't bear to let them have this one. While they may have succeeded in squeezing through Portland's human net, this isn't over yet.