I thought travel was a thing of my past

I tried to convince myself I could live vicariously through others. But with a second marriage came a second chance 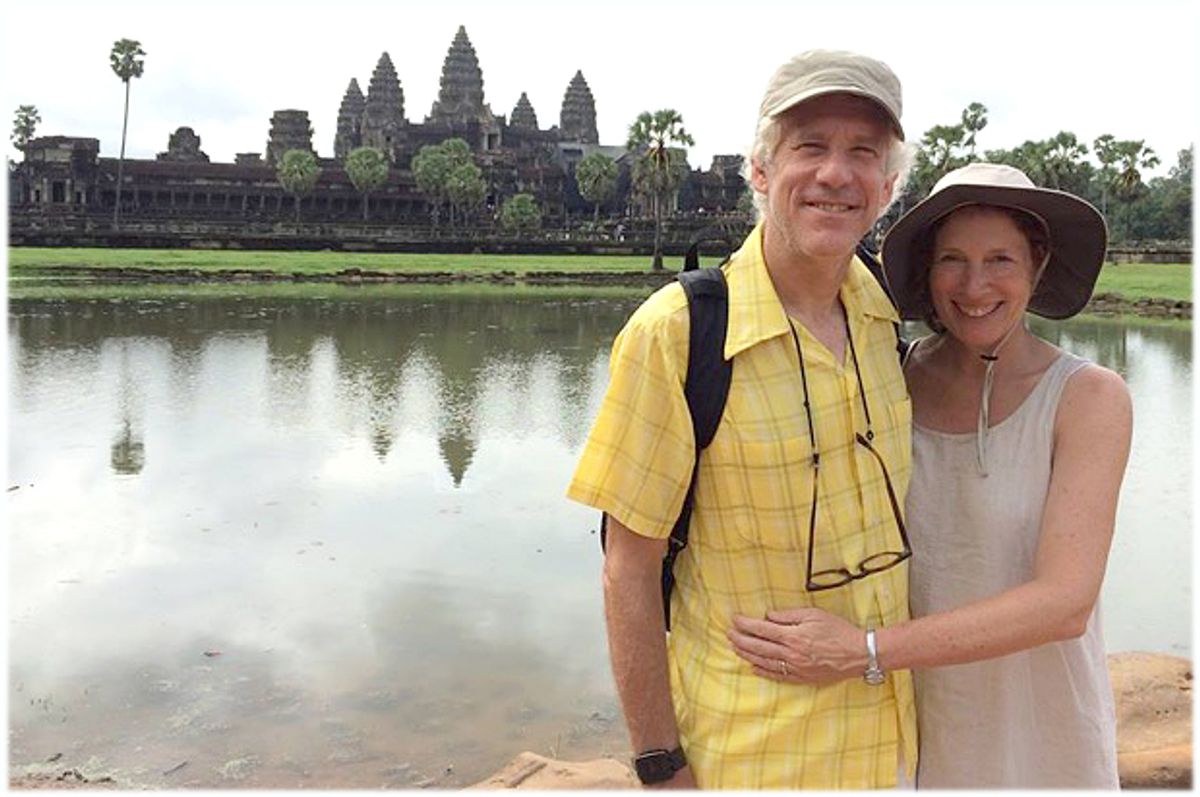 I zipped my backpack shut and checked a fourth time to be sure my passport and plane tickets were in my travel wallet. Once I had, I was finally ready for the next morning’s flight — actually, series of flights — to Southeast Asia. Jeff was approaching the trip slightly differently. My husband’s clothes were still stacked in mounds on the bed next to a travel ukulele and an office worth of electronics, all to be stuffed into a backpack the size of a small sports car.

Jeff and I generally live together in the kind of harmony the Beach Boys would envy, but when it comes to travel the dissonance is ear-splitting. I like to be at the airport hours early, he minutes before the flight attendant slams the cabin door shut. I pack minimally and methodically while Jeff’s philosophy is “If I think I might need it, I’m bringing it.” As I watched Jeff count out two weeks' worth of underwear, I willed myself not to say anything. Divorce is a terrible way to start our first long trip together.

Long before I started packing, I knew this trip would be very different from the last time I’d visited Southeast Asia almost two decades before. Back then, I traveled a lot. After college, I backpacked around the world for months — occasionally years — at a time. My identity seemed forged by the stamps I collected in my well-worn passport. The boy who’d eventually become my first husband and I would buy cheap tickets, strap on rucksacks containing two changes of clothes, a few extra sets of underwear and a toothbrush, and see the world while staying in hostels or huts without electricity. We hitchhiked through New Zealand, bounced along Indonesian roads in crowded buses jammed next to chickens and rice sacks, glided by outrigger through the Sulu Sea in the Philippines and by freighter through the rough South Pacific in the Cook Islands. We were determined to not only see the world, but to sense it fully, too — to smell, hear, taste and touch it. If there was a border, we needed to cross it.

When that relationship ended after 18 years, so did my travel. Like household goods divvied up in the divorce, I got the stainless steel cutlery and he got the plane tickets. But at the time, I didn’t mind that it wasn’t a part of my life anymore. I told myself it was time I tucked away travel and grew up. I had a daughter to take care of as a single mom with sole custody, so at the time I moved on by not moving and was happy staying where I was, content on our own in Brooklyn. But when a year later I began to feel slightly less content on my own, I decided to try to meet someone.

I met Jeff on my first date in almost 20 years. From the beginning, it felt natural and mature in ways that my marriage never approached. We talked things out; we made decisions together, and much later, when I told Jeff I wanted to try my hand at writing, instead of laughing as my husband had, Jeff offered to take on extra work so I could make a go of it without worrying about where the next meal might come from.

Everything about the relationship was thrilling, not only for me but also for my daughter whom he doted on as if she were his own. All I’d read about relationships led me to be wary, though. If ours was this easy, it couldn’t possibly be real. Instead, I was sure it was like the Nigerian email that occasionally made it past my spam folder, messages with a polite greeting that promised a long lost fortune: highly suspect and too good to be true. But after a couple of years, we married and bought a house out in the country in upstate New York.

Although Jeff had traveled some in the past — he’d lived on a kibbutz for a year after high school and backpacked through Europe after college — it didn’t define him in the way it had for me. We took short trips on vacations and enjoyed them, despite some small philosophical travel differences. Jeff worked hard and saw vacations as a way to relax, while I was generally in explorer mode.

Over the years, I convinced myself that I didn’t miss traveling, yet I found myself frequently reading books set in faraway countries. When friends and family posted vacation photos on Facebook, I’d tell myself living vicariously through them was all I needed. I’d say place names out loud — Vientiane or Botswana — to taste them in my mouth. But, like a dieter who tells herself a picture of chocolate cake is just as satisfying as the real thing, they were tasteless and empty. I’d persuaded myself this was enough. Sometimes it’s easier to talk yourself into believing something rather than wading through psychic muck to find out what really makes you happy because the truth can be frightening. Did I need more out of life than I was getting? Namely to be back on the road again, so to speak. “Don’t go there,” I told myself. I didn’t and so I allowed that part of me to get lost. I didn’t even realize it was missing. I stashed away what I thought of as my old life in a box in the far corner of my subconscious.

Travel became something from my youth, like wearing a bikini confidently or meeting friends for drinks at 10 p.m. — an activity I used to enjoy, but had grown out of.

But I couldn’t keep that restlessness locked away forever. After a couple of years in upstate New York, we traded our house on a dirt road for an urban bungalow in Portland, Oregon. One day I was in the city’s great landmark, Powell’s bookstore, and found myself in the travel section. I pulled a Lonely Planet guide to Cambodia off the shelf and flipped through the pages, entranced by the photos of Angkor Watt and saffron-robed monks. With that, I realize now, I wasn’t just opening a guidebook — I was reopening that part of myself that had been as closed and musty as a guide to Mandalay. I could feel myself transforming from content middle-aged woman back to Traveler Sue — every cell vibrating, needing, to pack a bag and go. The prospect was as electrifying as it was frightening. Jeff had work deadlines. Would he be as excited as I was? What if he wasn’t? Would this expose some kind of hairline fracture in our relationship? Now that I’d suddenly rediscovered my long-lost love, what would happen if my present love didn’t want the same thing?

As I flipped through another guidebook, I could feel my cautious outer layer peel away. Maybe we could make it happen. It was one of those fork-in-the road moments. I could have put the book back on the shelf and headed off to the fiction section, but instead I bought the guidebook and a couple more.

When I got home, I checked to see how many credit card points I had. Twenty years’ worth, it turned out. I’d been saving them for something, but I hadn’t known what. I checked to see if they'd cover airplane tickets for Jeff and me. They would. The next thing was to check with Jeff. I burst into Jeff’s office, guidebooks behind my back.

“What do you think about going to Cambodia?” I asked.

Jeff blinked in surprise, thought about it for second and instead of balking, quietly suggested, “Why not Vietnam, too?” He had marched in antiwar protests while in his teens and said that he’d always wanted to visit the country — just not in 1972.

Why didn't I suggest traveling sooner?

But an issue quickly loomed nearly as large as the mountain of underwear Jeff was cramming into his luggage. I was determined to travel the same way I had years before. Although I wasn’t married to my ex, I was wedded to our way of budget travel. Jeff had his own ideas and, when I’d told him about 12-hour bus trips and thatched huts with cold water, he looked at me with horror.

“We’re not going to travel like you did in your 20s, with a toothbrush and change of clothes,” he said, stuffing his Kindle and iPad next to the stack of underwear.

“I had two changes of clothes,” I said, keeping facts straight and my mouth shut about his ever-expanding backpack.

“But why would you even want to travel like that now?” Jeff asked, reasonably. “We could afford a bit more comfort. What are you trying to prove anyway?”

It was a good question. Was I grasping at a bit of my youth? Suffering from middle-aged rigidity? Or was I merely cheap?

I mulled on this while we packed and as a few weeks later we argued about how to get to Siem Reap.

“But they take 12 hours because of all the roadwork. A taxi’s only a little bit more and a lot more comfortable,” Jeff countered.

It was actually three times as much as the bus. But, I pondered, it was still less than we spent on date night at our neighborhood Thai place. Feeling my rigidity flex, I agreed to take a taxi. On the trip, our driver stopped at a roadside market, one with vendors selling local fried delicacies: crickets, grubs and, my favorite, barbecued tarantulas, which, to Jeff’s alarm, I bought a bag of to snack on during the ride. It turned out that paying a bit extra was the perfect compromise: something for my earlier, adventurous self to sample, and comfort to stretch out our creaky middle-aged legs for Jeff.

So I traveled light and Jeff traveled heavy. But I discovered those chargers he’d packed came in handy and that I enjoyed having 10 books on my new Kindle. Although I couldn’t convince him to take a bite of an arachnid, there was a point early in the trip when he casually said that maybe he didn’t need the four pairs of pants and two dozen pairs of underwear. We both had our little victories.

But the trip was more than little triumphs. On the first day of our trip in Ho Chi Minh City, Jeff and I clung to each other and stepped into the river of nonstop traffic that is a Saigon intersection. While completely and utterly terrified at the prospect of crossing the street against traffic coming from six different directions at one time with what appeared to be a total disregard for the rights of pedestrians, I felt alive in a way I hadn’t for years, even if my death was imminent. We kept going until we made it safely to the other side. As I turned and looked to see where we came from, I couldn’t wait to cross back again.