We all got addicted to Jon Stewart: How the "Daily Show's" brilliance made us codependent with the crazies

He needed dysfunction for laughs. We needed laughs to feel better about the dysfunction. It's time we stop laughing 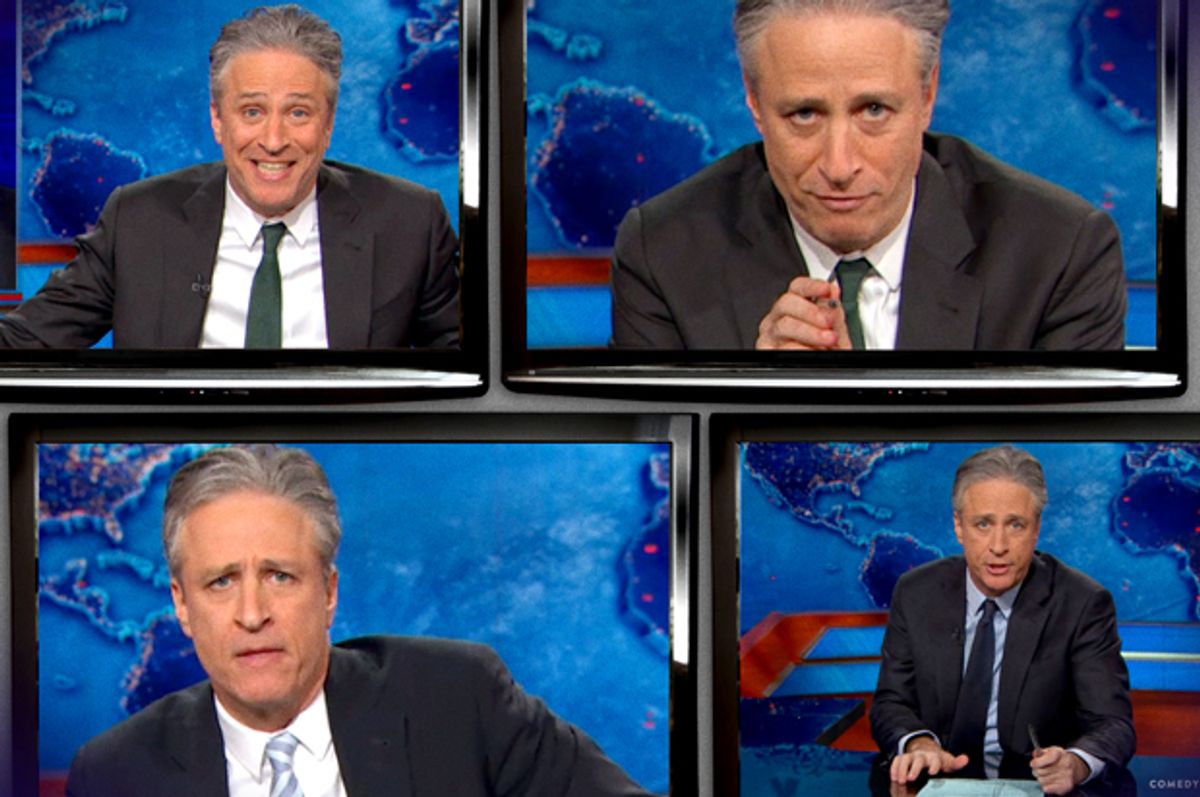 The other night, my wife and I did something we hadn’t done for a long time. We binge-watched "The Daily Show." “He’s still funny,” my wife said afterwards.

I feel the need to make this point, because as Stewart prepares to hang up his spurs (and barbs), the consensus that has formed around him is that he’s a national hero, an intrepid truth teller, a kind of secular prophet in an age of folly, and the first Jew perhaps worthy of canonization.

And thus anyone who argues that Stewart might represent more troubling aspects of our age is written off as a self-righteous hater who doesn’t get that he’s just a comedian.

So one more time, for the trolls in back: I get that Jon Stewart is just a comedian, even if The New York Times hailed him as “the most trusted man in America” and a pundit on CNN just suggested he run for president.

In fact, he’s a sensational comedian with impeccable timing, a nose for hypocrisy, the courage to call out bullshit artists and the capacity to impart vast stores of data and wisdom to his audience without ever coming off as pedantic. By nearly all indications, he is also a deeply thoughtful and decent guy.

What else can you say about someone whose next career move is to open an animal sanctuary in New Jersey?

The question haunting me is what Jon Stewart meant in the larger weave of American history.

I have written elsewhere about the moral vagaries of Stewart’s particular approach to satire. But how did Stewart function as a symptom of our historical moment?

Today, a clear majority of our citizens—of every ideological persuasion—share the same disquieting suspicion: that we are somehow powerless to fix our broken civic systems.

For some, religion remains the fount of salvation. Others place their trust in the bluster of conservative demagogues, or simply lose themselves in a fog of frantic material and athletic distraction.

As for the rest of us—the Troubled But Tame Majority, let’s say—we chose to embrace Stewart (and his various cohorts) as our moral authority. Why? Because he was the one capable of articulating the depth of our dysfunction without totally bumming us out.

On the contrary, his job was to convert this dysfunction into disposable laughs, expertly choreographed farces in which Stewart channeled our own helpless bemusement. Over a decade of watching him, we viewers came to see our political system and Fourth Estate as entertainment products rather than sacred institutions with clear moral purposes (to govern, to inform).

There were notable exceptions to this pattern, as Stewart’s many defenders will cite. He was able to help push through a health care measure for first responders to 9/11. He made mincemeat out of various charlatans, most of them fellow television stars.

And he dropped the joker’s mask when confronted by horrors such as the racist murder of nine African-Americans last month in Charleston, South Carolina, though it’s notable that he often stopped short of directly addressing the political roots of such horrors, in this case the power of America’s gun lobby.

Stewart himself recognized his role as essentially therapeutic. When he was given a chance to confront figures of immense power, such as Condoleezza Rice, he tended to flatter and quip.

At the Rally to Restore Sanity and/or Fear, which he and Stephen Colbert threw before the 2010 midterm elections, he offered nothing more than gags and earnest pleas for civility. Four days later, Tea Party candidates stormed into the House of Representatives, ushering in an era of ideological extremism and perpetual gridlock.

Because this is how it always went with Stewart. No matter how wittily he railed against the citizens of crazytown, he was also weirdly beholden to them. They were his material.

If you step back from the news cycle far enough, you can see another, more insidious cycle in effect: a cycle of dependence. Stewart was dependent on the moral depravity of those in power. And we were dependent on Stewart, because he made this depravity hilarious.

Witness one of the recent segments my wife and I watched, a breathless paean to Donald Trump, the casino-boss-turned-presidential-candidate whose sleazy bombast has compelled the networks to frame the GOP race as a reality TV show.

Stewart began by muttering a pro forma speech about the sanctity of our electoral process before surrendering to his comic id. “But fuck,” he declared. “This guy is so much fun!” This led to a flurry of Trump clips. Stewart kept trying to turn his attention “back to the process.” But the other candidates were so boring.

Watching this riff, my mind returned to the question posed by the cultural critic Neil Postman four decades ago: “To whom do we complain, and when, and in what tone of voice, when serious discourse dissolves into giggles? What is the antidote to a culture’s being drained by laughter?”

None of this undoes how funny Stewart’s Trump bit was. But it’s worth noting that one of the candidates he dismissed was Bernie Sanders, the Vermont Democrat whose astonishingly successful challenge to Hillary Clinton has been, by any objective measure, a thrilling story. Sanders wants a national single-payer health care system. He wants to impose a tax increase on the super wealthy so every kid in America can go to college. And so on. He’s drawn huge crowds and raised $15 million from small donors.

So why has Stewart, in the closing weeks of his show, virtually ignored Sanders? Because, compared to Trump, he’s insufficiently “dickish.” He makes serious policy, not shtick. And shtick was how Stewart kept score. It was always about the laugh. For him and for us.

Stewart was fortunate to come along at a historical moment suited to his brand of satire. Greed, hypocrisy and deceit ran amok, often in plain view.

Americans who care about economic justice, environmental ruin, military exploitation and civil rights should be hopping mad about the state of our union, about the aggregations of money and power that continue to overrule common sense and common decency.

In this sense, Stewart certainly deserves to be called a transformative figure. Night after night, he and his talented writers took the edge off our rage. They urged us to look away from the Sanders of this world and toward the Trumps.

Now that he’s moving on, it might be a good time for Americans to focus on the true mission of our age: summoning the power to improve our world, not just our mood about it.