Dozens of racing horses die every week because of drug abuse 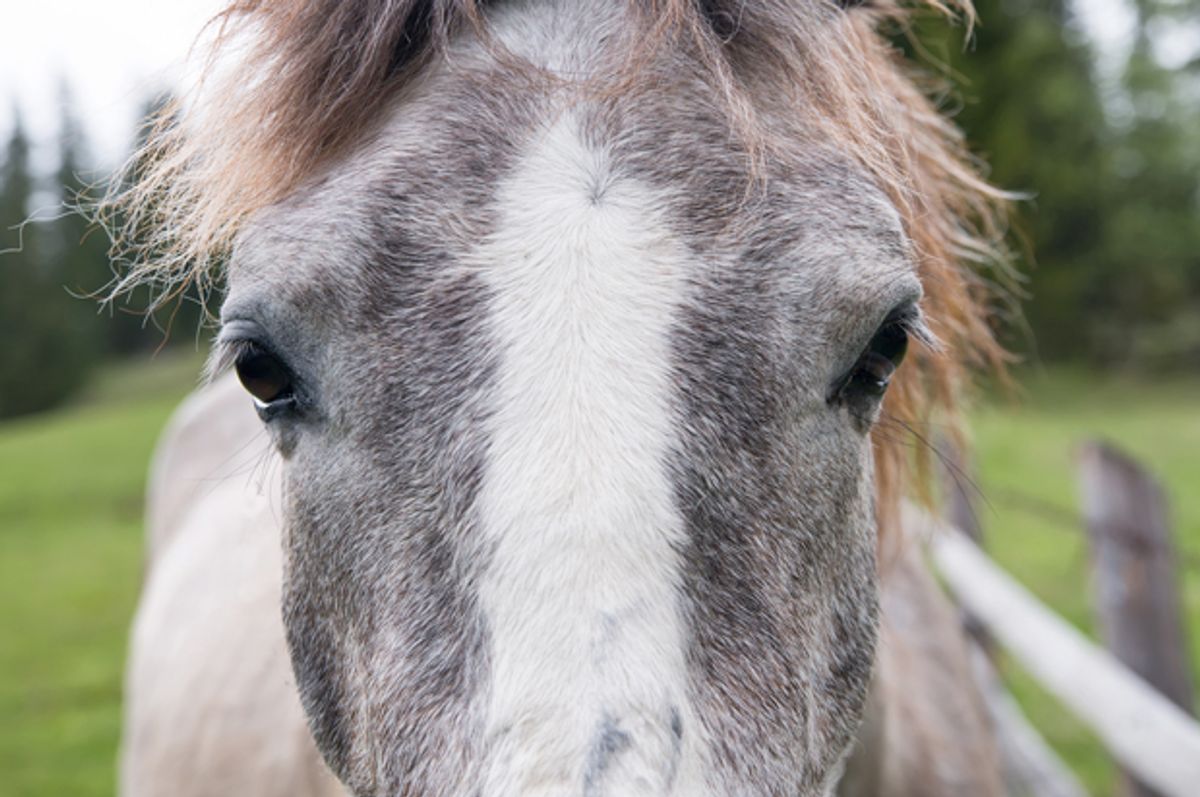 There is cause for hope that Congress may finally do something to impose some standards on horse racing and empower a non-governmental, independent organization to stop the widespread race-day doping of horses — a contributing factor to perhaps as many as 24 horses dying every week on American racetracks.

Last week, on behalf of a coalition of horse-industry and animal welfare groups, Congressmen Andy Barr, R-Ky., and Paul Tonko, D-NY, introduced legislation, H.R. 3084, to create a single independent organization to set up and enforce uniform national anti-doping rules for thoroughbred racing. In fundamental ways, it's similar to legislation previously introduced by Rep. Joe Pitts, R-Pa. and Senator Tom Udall, D-N.M. — both strong animal advocates — that would put the US Anti-Doping Agency (USADA) in charge of establishing and enforcing drug rules for horses on race day. It's our hope that the Barr-Tonko legislation, which covers just thoroughbred racing, will be amended — as the bill moves forward — to cover all horse racing, including quarter horse and standardbred racing, which have had their own share of doping scandals, such as the doping of several quarter horses with "frog juice" in 2012.

Some of the biggest names in thoroughbred training, such as Rick Dutrow and Doug O'Neill, are chronic violators of the typically weak, highly variable state-based anti-drugging rules. And just about every horse running in the Triple Crown races this year was running on Lasix, a drug that is widely recognized as a performance enhancer. Doping horses for racing is more dangerous today than ever because breeding practices — which select for speed and champagne-glass legs — make the horses less sturdy and more vulnerable to breakdowns than they were even 10 or 20 years ago. Just hours before American Pharoah won the Belmont, a four-year-old colt named Helwan broke down, having shattered his ankle bone, and was euthanized on the track. New reports later stated it was Helwan's first time on Lasix, as he had previously only raced in Europe, where the drug has long been illegal. It's clear that our horse racing tracks in the United States are turning into crash sites.

Right now, regulation of this industry is balkanized, with each of 38 racing jurisdictions having its own set of rules. They allow different medications, varying levels of permissible drugs, different penalties for violations, different rules on which horses are tested for drugs, and different laboratories to do the testing. Without one single regulating body, racehorse owners and trainers who are barred from racing in one jurisdiction can simply shop for a more permissive venue. This is a national industry, and like football or baseball or other major American sports — perhaps more so, since the equine athletes have no choice in the matter and cannot speak up for themselves — we need national standards to stop unethical trainers and veterinarians from doping horses to improve their chances of winning.

The industry is also plagued with dozens of poorly run and regulated tracks having fatality rates as much as three times the national average — the minor leagues of racing, if you will, such as Aqueduct in New York and Charlestown in West Virginia. Here and at other tracks across the country some trainers and owners are allowing unfit, unsound, even injured horses to compete. They are using drugs to get injured horses to run at full tilt, and they are even using performance-enhancing drugs, like Lasix, to push them beyond their physical limits and to put them in the money. They are gambling with the lives of these equine athletes, and this industry is in desperate need of a makeover. It starts with putting the horses ahead of profits.

Doping of baseball players, cyclists, and Olympic athletes is now deeply frowned upon. Why would we tolerate daily doping of horses in racing? Level the playing field and forbid everybody from race-day doping, and you have real competition and less risk for horses and jockeys. Allowing the doping to continue makes a mockery of bettors doing their due diligence and picking winners on the track. Doping scrambles the deck, and allows drugged horses to outcompete those horses who are running on hay, oats, and water alone. No other racing nation in the world allows the drug-for-all that we permit here in the US on race day.

The independent organization created by the Barr-Tonko bill would be comprised of representatives from USADA – the same agency that is recognized by Congress as the official anti-doping agency for the Olympic, Pan American and Paralympic sports in the US — and members of the thoroughbred horse racing industry. The legislation is supported by The Jockey Club, the Breeders' Cup, the Water, Hay, Oats Alliance (WHOA), the Kentucky Thoroughbred Association, and other major racing industry organizations, horse owners, track owners, and trainers.

Congressman Pitts and Congresswomen Anna G. Eshoo, D-Calif., and Jan Schakowsky, D-Ill., have also reintroduced the Horseracing Integrity and Safety Act (H.R.2641), which would offer the promise of creating meaningful anti-doping reform across the entire interstate horse-racing industry. This bill would designate USADA as the independent anti-doping organization for interstate horse races. USADA would create rules regarding the use of permitted and prohibited substances, and develop anti-doping education, research, testing, and adjudication programs. This is a good bill, but is unlikely to move without industry support. It's our hope that Reps. Barr, Tonko, Pitts, Schakowsky, and Eshoo, and Sen. Udall will continue to keep the dialogue going and settle on a final bill that forward-thinking horse-industry representatives and animal welfare groups can support, so we can finally stop these terrible abuses on the track.

Why bet on a sport where the fix is in and the human and non-human athletes are at such risk of becoming casualties? It's time for Congress, which enables this entire industry to operate by allowing gambling through the Interstate Horseracing Act of 1978, to impose some rules on an industry that has failed to clean up its problems on its own. There's never been a better moment for action.