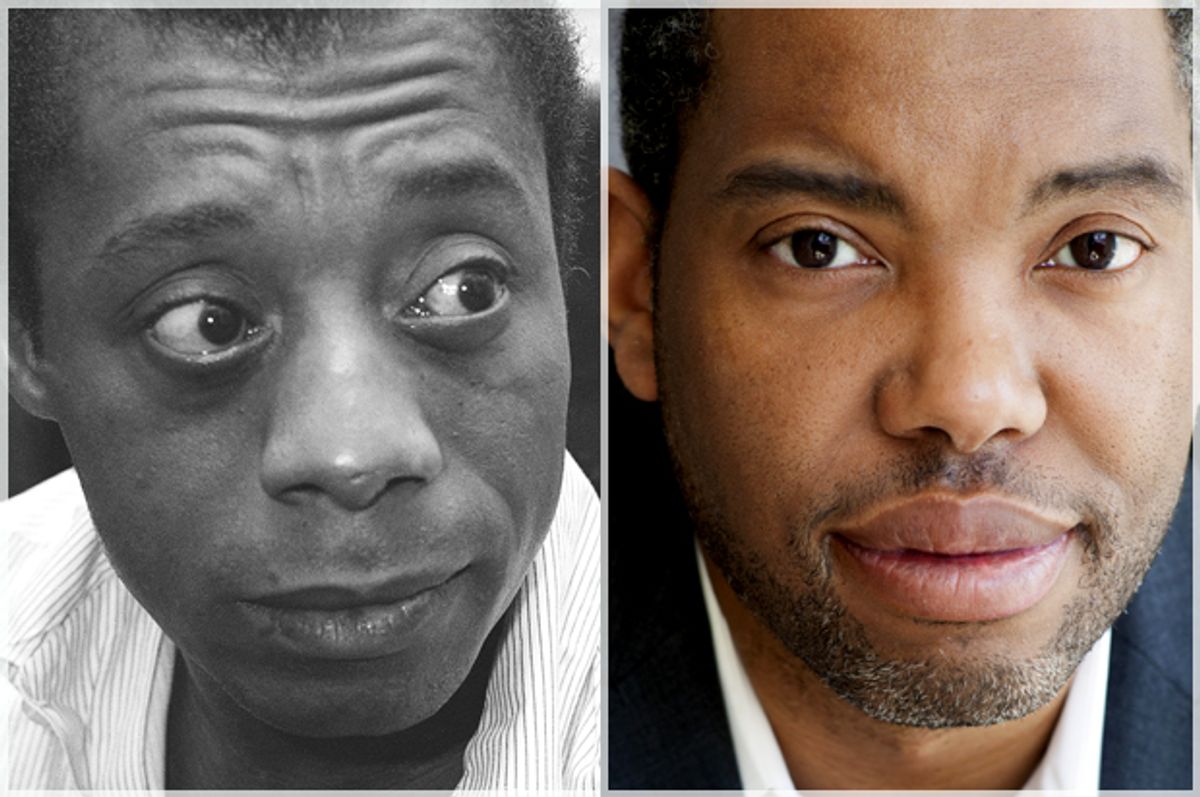 “What might be accepted as just good old American independence in someone else would be insufferable arrogance in me.”
-- James Baldwin, “Previous Condition” (1948)

Happy birthday to the author and intellectual James Baldwin (1924-1987), who would be 91 today and whose words ring fresh and true into our time. At the crossroads where ongoing racial injustice and new rights for queer Americans meet, Baldwin deserves to be remembered as a civil rights icon who insisted on his human dignity as both an uncringing descendant of slaves and a bold “sexual heretic,” as he put it. Baldwin spoke, wrote and marched for full civic equality. But although he is worthy of the memes now circulating the Internet with his compelling face above a snatch of his wise words—worthy, too, of being held up as a possible exemplar for modern writers like Ta-Nehisi Coates—Baldwin cannot be reduced to a meme. No American of the 20th century resisted slogans more strenuously than this carefully nuanced thinker, and understanding him in light of his historical moment makes him an even more powerful necessary beacon for ours.

As American intellectuals go, Baldwin was not exactly born to privilege. At 3 he had never known his father when his mother married the man who gave Baldwin his surname and a great deal of abuse, although Baldwin never called it that. He called it “cruelty, to our bodies and our minds,” and while Baldwin tried to protect his eight younger siblings from their father’s rages, he could not help believing that he was “ugly,” as his stepfather said, that his slight size was a problem, and that his sexual attraction to boys was a sin. Yet Baldwin also understood how his stepfather turned his hatred of being oppressed into toxic bitterness and how living this way destroyed him. Baldwin determined to fight injustice and to begin the fight inside, “to keep my own heart free of hatred and despair.” This was no small struggle in Jim Crow America.

The family was impoverished, partly because of the Great Depression that hit Harlem harder than other places, partly because of the structural inequality that kept the descendants of slaves poor, and partly because of his stepfather’s inability, as a minister, to keep a congregation happy for long. At home, Baldwin sunned in his mother’s love and cared for his little sisters and brothers, changing diapers, minding the little ones and reprimanding the older ones. He waited until they were all asleep to read the books he ingested like food, he said, on loan from the public library.

Those books: Baldwin cannot be understood apart from those books. He read Charles Dickens and Honoré de Balzac, Fyodor Dostoevsky and Henry James, the entire canon of Western literature, which he made his own. There were no black stars in Baldwin’s early literary pantheon, but there was Frederick Douglass Junior High, a namesake who prefigured Baldwin’s mastery of high American English and code-switching. Baldwin attended a socially conscious, artistically serious high school in the Bronx, leaving the province of black Harlem for the integrated city of “Fame,” as Baldwin emblazoned his yearbook profile. He wanted to succeed on the scale of timeless literary excellence.

Before success came many years of writing articles, reviewing books he disliked and hustling for both sustenance and shelter. His first published short story, “Previous Condition” (1948), fictionalizes the experience of housing discrimination in New York. Evading his landlady to prevent being evicted for his color, the black protagonist fights anger and depression. “What might be accepted as just good old American independence in someone else,” the desperate protagonist thinks, “would be insufferable arrogance in me.” In that one line Baldwin named the riddle of the “American Dilemma,” as the Swedish sociologist Gunnar Myrdal titled his book of 1944, contrasting the widespread American belief in the creed of social equality against the equally widespread practice of racial discrimination. Baldwin simultaneously contested this creed and lived by it. “I would not allow myself to be defined by other people,” Baldwin later remembered of these years, “white or black.”

Baldwin’s intellectual independence drove his writing, both the polemical essays and the exploratory fiction. In “Everybody’s Protest Novel” (1949), Baldwin criticized a novel by his mentor and friend, the black novelist Richard Wright, by lumping it together with the 1852 antislavery novel "Uncle Tom’s Cabin," by Harriet Beecher Stowe. All that Dickens and James had conditioned Baldwin to read Stowe’s sentimental book as the propaganda it was, demanding of Uncle Tom such sexless purity that it reinforced the binary Baldwin would destroy, blackness and whiteness as separate, meaningful, hierarchically ordered categories. A character who was only two-dimensional, like Uncle Tom or Wright’s Bigger Thomas, could not be fully human—and Baldwin was determined to manifest his full humanity and to create space for others to do the same.

“[O]ur humanity is our burden, our life,” Baldwin said in his conclusion to that essay. “The failure of the protest novel lies in its rejection of life, the human being, the denial of his beauty, dread, power, in its insistence that it is his categorization alone which is real and which cannot be transcended.”

Baldwin’s own humanity included both an awareness of his erotic attraction to men and a willingness to bear the scorn of his peers by acting on that attraction. Thirteen years before the Stonewall riot—to which modern gay rights activists often trace their origin—James Baldwin published "Giovanni’s Room" (1956), a novel that naturalized same-sex sex as beautiful. (The book later lent its name to the first gay bookstore in America.) Baldwin had given homoerotic hints in his first novel, the bestselling "Go Tell It on the Mountain" (1953), which he had composed in the Alps while listening to Bessie Smith after the heartbreaking marriage of his first love, the Swiss Lucien Happersberger. Baldwin created characters who had never been seen in literature before, and by shaping them three-dimensionally, he portrayed black characters as richly human. In "Giovanni’s Room," Baldwin did the same for men who loved men. Upon acting on his desire for another man, Baldwin’s protagonist felt a “great thirsty heat, and trembling, and tenderness so painful I thought my heart would burst. But out of this astounding, intolerable pain came joy, we gave each other joy that night. It seemed, then, that a lifetime would not be long enough for me to act with Joey the act of love.”

After all of that self-exposure came the civil rights movement, but not exactly as history remembers it. Many Americans depend on a narrative of civil rights that swings from the (good) nonviolent phase to the (bad) black power phase, but Baldwin’s participation shows that there was always a spectrum of activism and opinion in the movement, which cannot be reduced to figureheads. For all the extremism of James Baldwin’s loneliness—he had to live in France in order to feel safe enough to express himself freely—his role in the civil rights movement was that of a moderator, a translator between different views. Baldwin supported Martin Luther King Jr., and considered him like a younger brother; he went on television with King and marched at Selma; he was devastated by King’s assassination. Baldwin also debated Malcolm X and disagreed with him on some points but did so in debates so civil, so thoughtful, they forged a strong partnership while Malcolm X was alive and Baldwin wrote a screenplay for Malcolm’s autobiography after his death. (These debates between two self-taught, grass-roots intellectuals also hold a great lesson in paying attention for today’s quick-fix generation.) Eldridge Cleaver viciously attacked Baldwin, for his homosexuality and his friendliness with the white literary establishment, but Baldwin still supported black power and the Black Panther Party, working with Huey Newton, Angela Davis and others. “He put a psychological arm around my shoulder,” remembered Alex Haley. Toni Morrison said Baldwin gave her “a language to dwell in.” The list could go on. Way on.

Until today, and doubtless tomorrow. It should be no news to anyone that the Obama presidency did not cure America’s disease of discrimination on the basis of race. It would not surprise Baldwin, were he alive. Ferguson, Baltimore and Charleston, Trayvon Martin and Tamir Rice and Sandra Bland, Eric Garner choked to death and Walter Scott shot in the back for nothing are all in the news not because they are new but because of the ubiquity of video cameras. Americans “who believe that they are white”—to use the phrase of Baldwin’s that Coates chose as a refrain for his new memoir, "Between the World and Me" (2015)—are being held accountable for the first time, with media and commentary reaching into places news cameras had never penetrated before. Americans “who have opted for being white,” as Baldwin put it during the Reagan era, complain about urban riots in the wake of police brutality, counter the anguished protest that “black lives matter” with the dopey retort that all lives matter, expect all activists to portray perfect nonviolent equanimity in the face of any kind of harassment, and doubt the testimony of the victims of racial discrimination.

Whether these Americans are able to listen to James Baldwin with any more open-mindedness than the arch-conservative William F. Buckley Jr. could in 1965 is an open question. But if they listen they will hear how the aspiring writer James Baldwin felt as a young man, a very small, unarmed, hungry young man, upon being denied service in a New Jersey restaurant because of his race. A year before a friend and social activist had leapt to his death from the George Washington Bridge. Now Baldwin heard a waitress say, “We don’t serve Negroes here,” and from within him boiled such a profound, murderous anguish that he hurled a glass mug at her. Shocked at himself, glad he missed, he ran from the scene and realized that he could have been murdered, and that he “had been ready to commit murder. I saw nothing very clearly but I did see this: that my life, my real life, was in danger.”

America may be glad that Baldwin went on to live his full, real life.

Amy Kittelstrom's new book is "THE RELIGION OF DEMOCRACY: Seven Liberals and the American Moral Tradition." She is a scholar of modern thought and culture who lives and works in the North Bay Area of California. She currently serves on the editorial board of the Journal of American History and is an associate professor at Sonoma State University. Her research has been supported by fellowships from the Center for Religion and American Life at Yale, the Charles Warren Center for the Study of American History at Harvard, and the Center for the Study of Religion at Princeton. Her next book will put the twentieth-century writer James Baldwin in deep historical context.