This is how the clowns took over: The sad history leading to the spectacle of a Fox News debate starring front-runner Donald Trump

The road to Fox and Trump was paved by decades of right-wing loathing of the media, facts and reality 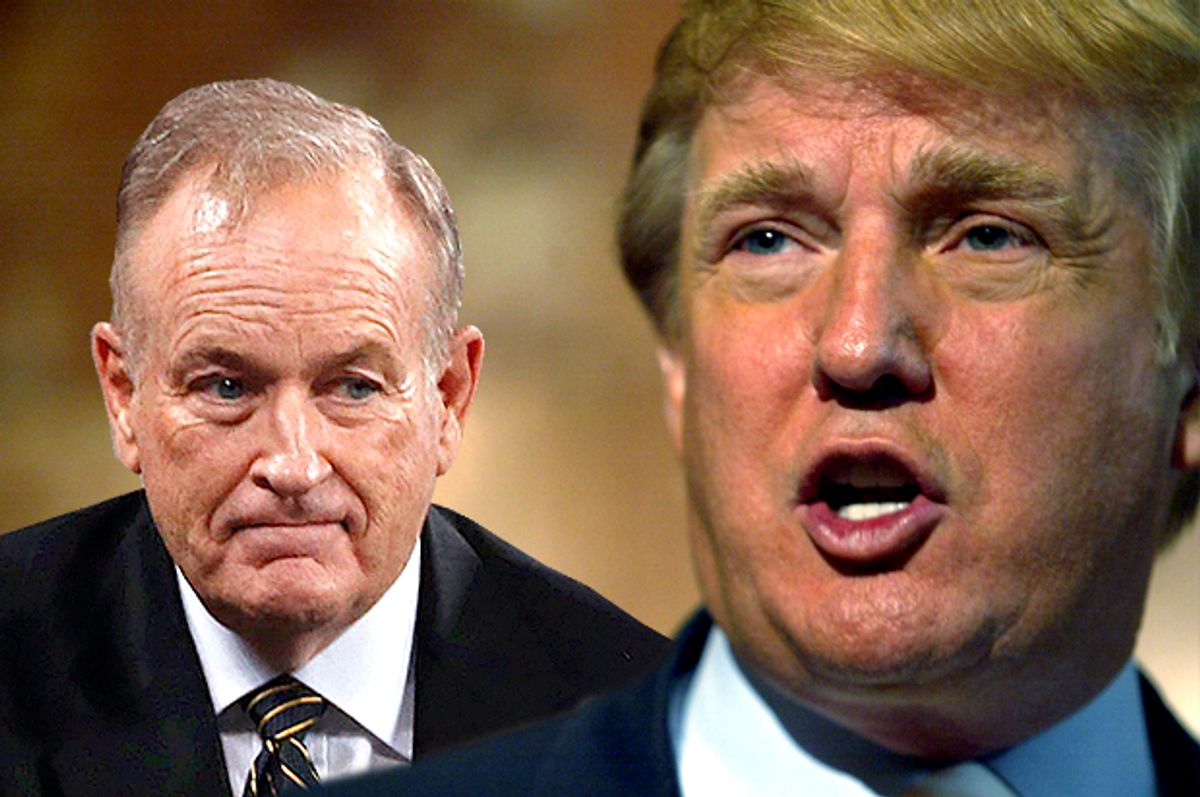 Fox News will air the first Republican presidential debates this week, choosing 10 out of 17 current candidates according to unspecified polls and permitting each candidate just one minute to answer questions. Donald Trump will hold center stage. This scenario, where a TV network calls the shots in a presidential debate and a consummate brand maker is the leading candidate, is the culmination of Movement Conservatism. Politics is no longer about policy or nuance, or even reality. It is simply a storyline designed to appeal to voters’ emotions.

Movement Conservatives began their corruption of American politics in the 1950s. Faced with opposing the New Deal reforms that regulated business and provided a social safety net, they had the terrible problem that those reforms were enormously popular. When voters weighed policies based on facts, they backed the New Deal and, later, Eisenhower’s similar Middle Way. To sell Movement Conservatives’ unpopular ideology, the young William F. Buckley Jr. attacked the idea that voters should engage with facts, openly debated in public. Since such debates had created the New Deal government, which was, to his mind, godless and communistic, they must be the wrong approach. Instead, he urged Movement Conservatives to push a worldview that inculcated their principles of religion and a free market economy. He illustrated how this was done in his 1951 "God and Man at Yale," cherry-picking quotations, misrepresenting his opponents, and posing as a persecuted victim. In place of reality-based argument, Buckley substituted a narrative based in fear and outrage.

At first, Buckley’s approach to political engagement went nowhere. Americans were firmly committed to fact-based debate. In the late nineteenth century, America had had a viciously partisan press that had deliberately whipped up political passions. Partisanship ran so high that newspaper stories led directly to lynchings and riots and even to the assassination of President James Garfield. When this so-called yellow journalism helped push the country into the Spanish-American War, which led to a quagmire and subsequent atrocities in the Philippines, Americans pushed back. They demanded news that adhered to fact without editorializing, so readers could make up their own minds about how to interpret those facts.

At the beginning of the twentieth century, publishers deliberately moved away from partisanship and created newspapers designed to present the news without a partisan slant. The move toward news that presented facts rather than pushing an agenda exposed uncomfortable realities, including the extraordinary power of wealthy businessmen and the dangers of unregulated industries, which sold contaminated food, polluted water supplies and abused workers with impunity. The era’s journalists led the way to the popular reforms of the Progressive Era.

So deeply ingrained was the idea that civic health depended on fact-based media that when the precursor to the Federal Communications Commission first began to regulate the newfangled technology of radio in 1927, its officers insisted that the cost of doing business for a public radio station was that it would present information fairly and honestly, presenting different points of view on issues covered. This evolved into the FCC’s “Fairness Doctrine” in 1949, which required that television and radio cover all controversial issues with balance and fairness. The Fairness Doctrine became standard operating procedure for public communications in the twentieth century.

But the impartial production of information presented a problem for Movement Conservatives, because openly debated facts had led to an overwhelming American consensus behind the New Deal. So in 1954, Buckley and his brother-in-law L. Brent Bozell articulated an attack on the American media. There were two factions in America, they explained. There were a few principled, true Americans they dubbed "Conservatives," who had to keep America from sliding into socialism or communism. The rest, the vast majority of the country that embraced the New Deal and the Middle Way, were “Liberals” who were forcing communism on America. They explained that communism was winning because these Liberals controlled universities, the government… and the media. To fight back against the “Liberal media,” Buckley launched the National Review in 1955, railing against “such fatuous slogans as ‘national unity,’ ‘middle-of-the-road,’ ‘progressivism,’ and ‘bipartisanship.’”

The idea that a liberal media was overawing conservatives gained traction among Movement Conservatives, who insisted that their ideas were enormously popular but could not overcome the opposition of the liberal cabal that controlled the press. They blamed the liberal media’s “propaganda machine” for destroying Nixon in 1960 and Goldwater in 1964. Then the Nixon administration made believing in a liberal media bias an article of faith. In a famous speech on Nov. 13, 1969, Vice President Spiro Agnew attacked the broadcast media’s negative coverage of the Vietnam War, insisting that a few Eastern elites were deliberately overriding the popular will simply through their control of the major media networks. Nixon’s loathing of the press became so consuming after the Washington Post bore down on the Watergate story that when he resigned, he blamed the press for his downfall. He told Americans that it was neither the Watergate break-in nor the cover-up that had ended his career, but rather the “leaks and accusations and innuendo” the liberal media had published. For Nixon’s Movement Conservative supporters, reporting the facts had become a liberal plot to destroy the president, and with him, the nation.

Movement Conservative Ronald Reagan was no fan of the reporters who had an irritating tendency to fact-check his blithe assertions. When he won the White House, Movement Conservatives set out to undo the fairness doctrine, arguing that it pushed a liberal bias, just as Buckley had charged. In 1987, the FCC abandoned the rule, opening the door for the promotion of a Movement Conservative worldview. Rather than presenting impartial information and encouraging listeners to make their own decisions, public media could now push an agenda without fear of contradiction from fact checkers. The narrative they spun was simple: America was falling apart as Liberals backed big government programs that redistributed the tax dollars of hardworking white men to women and minorities. Within a year, talk radio had gone national, with hosts like Rush Limbaugh electrifying listeners with warnings that Liberals were destroying America by replacing individualism and religion with socialism.

In October 1996, Movement Conservatism gained its own media channel: the Fox News Channel. Australian-born media mogul Rupert Murdoch recognized that Movement Conservatives wanted to see their own worldview represented in the media. They had come to believe that anything coming from a mainstream reporter was Liberal propaganda that, as Buckley and Bozell had warned, pushed socialism. The liberal media, that is, any media based impartially in fact-based reality, were biased against their version of the world. Calling Fox News “Fair and Balanced,” Murdoch played on the Movement Conservative idea that a cabal of elitist “leftist and anti-American” news outlets were dismissing their views. By giving a voice to those ideas, Fox News promised to restore “fairness and balance” to American politics.

Movement Conservatives now bank on the idea that any media other than Fox is biased toward an un-American point of view. In 2012, presidential candidate Newt Gingrich summarized the argument. He called out the media for ignoring the Americans who “so deeply want their country to get back on the right track,” and who were tired of “elites who have been trying for a half century to force us to quit being American and to become some kind of other system.” But mainstream news channels do not seem to understand the history of the Movement Conservatives’ political attack on impartial media. For Movement Conservatives, any news coverage that does not explicitly endorse their viewpoint is biased and un-American by definition, no matter how well sourced or argued it is.

In their attempt to honor the American tradition of impartial and fair media, mainstream news channels have worked to give more and more airtime to the Movement Conservative worldview, until we have reached a point where the first Republican presidential debate will allow only a minute for responses to how a candidate would deal with the most pressing questions in the world, and where the leading candidate for the Republican Party’s nomination for president—for the most powerful office in the world—is the ultimate salesman.